On the Road with the Wheelie Kings of Cleveland 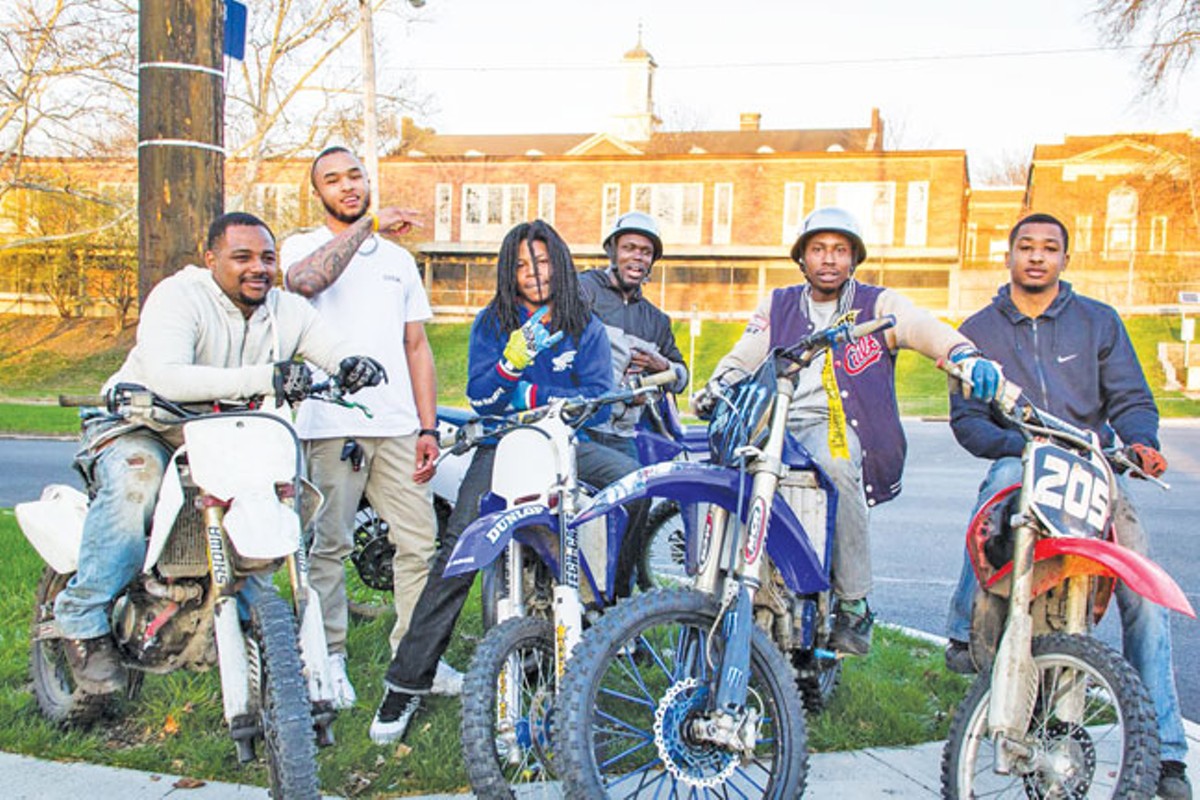 You hear them before you see them, the loud bursts of buzzing growing close like an angry swarm of bees heading your way — bzzzz.

And then they come into view, a pack of 20, 30, 40 young men on dirt bikes and four wheelers whizzing by, winding through curious onlookers and cars on the streets of the near-eastside, with complete indifference to traffic laws and, seemingly, their own safety.

The riders lift up their front wheels, leaning back as far as they can, cruising on rear rubber while peeking their heads out to the side to see what's coming. Wheelies, after all, reign supreme for the Mt. Pleasant Wheelie Kings.

"That feeling of being on a bike is just no fear," says 30-year-old James, known as "Smoke," a main figure in Cleveland's growing dirt bike subculture and leader of the MPWK group. "I couldn't even explain it to you unless you felt it yourself. You're on top of the world — people riding up alongside you, people got their cameras out, everybody on the street yelling, 'Throw it up.' It's just the power of the stunt. It's an unbelievable feeling. I'd think it's like flying, that flying feeling."

The MPWK crew and the rest of Cleveland's dirt bike riders prefer riding motocross-style bikes and fourwheelers over standard street motorcycles because they're better for stunts and not as expensive.

"It's a smaller machine and it's more fun," says Smoke, who mainly rides a blue YZ 125. You get a pretty good bike for $1,200, maybe $1,500, he said, but prices can fluctuate hundreds of dollars for the same type of bike depending on who's selling and who's buying.

And a lot of people are buying.

(Click for photos of Cleveland dirt bike riders in action)

Sightings of urban dirt bikers have blossomed in recent years — similar booms have occurred in Miami, Atlanta, Baltimore and other cities — and with social media displaying their tricks and stunts far and wide, more and more people have and will get a taste of the rush of "Cleveland bike life," as they call it.

With an increase in riders —Smoke guesses there are roughly 250 guys in Cleveland riding dirt bikes — comes an evolving cat-and-mouse game with Cleveland police, who are in charge of thwarting the illegal biking: Most of the bikes aren't exactly street-legal and neither is how they're being ridden. Police could shore up the city's budget with fines if they handed out as many tickets as are probably warranted, but the cops can't always get to them.

"They get really tired of chasing people around here," says one rider at an auto garage in a neighborhood off Union Avenue, where a group of 25 guys gathered one recent Sunday afternoon to tune up their bikes and hang out before a big group ride through city streets. "And even if they do chase you, all you gotta do is turn around. They see you stop on a dime — drrrrr ­—and whip that bitch around, they're like, 'All right, fuck it.'"

How the cops respond to the bikers depends on the day, ranging anywhere on the response spectrum from complete passivity to blasting pepper spray out the window as they ride past, to, according to the riders, ramming them off their bikes with their bumpers. Last week, MPWK's "T.J." was rushed to the hospital after police in an unmarked SUV pulled out and chased him (against department policy) and caused him to hit a car, according to the crew, who said the cops kept on driving as the biker lay splayed motionless on the ground. Things like that piss them off, naturally, but by no means does that have them considering stopping.

"You aren't gonna stop this. This urban dirt bike culture is here, it's evolving," says Smoke, who's in the tow truck business. "In the last two or three years, Cleveland's been getting into it. A few years ago, you couldn't find five people riding, now you can find 40. It's getting big and it's here to stay."

When it comes to police, there's strength in numbers for the riders, they explained. The more of them in the group, the less likely somebody's going to be pinched. But if they can single you out, separate you from the group somehow or catch you alone, chances get bumped up.

"The bikes don't really get tickets," he says. "They're mostly non-registered bikes. When you start getting tickets, that's because you made your bike street-legal and then you can get the red light tickets and all that. It's no license plate, so you don't really get tickets as far as that. But if your bike was to get impounded or something like that, they would charge you with tickets then: reckless operation and so on. Sometimes guys' bikes get impounded and they can't charge the person or whatever because they just caught the bike, so they just charge the bike with the tickets. So when you go to get your bike out of the impound, you got a certain amount of tickets on it when it was towed."

But the perception that the crew of mostly black bike riders is a roving band of criminals hellbent on terrorizing the city bothers them too. For outsiders, it's easy to ascribe motives and stereotypes that simply aren't true.

"I want people to know it's not always what they think," Smoke says. Some people on dirt bikes and quads are shitheads, sure, and he can't vouch for everybody who chooses to ride (not everybody who rides with them is affiliated with MPWK, and not everybody who rides in Cleveland is with this larger group). But simply riding with these guys doesn't implicitly make you a criminal or bad person, depending on how one views traffic laws and a few people taking an occasional hit off a joint.

"It's a brotherhood, not a gang; it's just having fun," he says, differentiating his crew from actual gangs and established motorcycle clubs with formal organizational structures and dues-paying members.

It's not hard to see what Smoke's talking about and why it pisses him off. Take, for instance, a panicky June 2013 WKYC news segment about the "growing problem" of "dirt bikers menacing the city streets." It's sensationalized local TV news fodder tailor-made for the cloistered suburban crowd when they were talking about MPWK.

"A group of dirt-bike bullies are terrorizing a local neighborhood," read concerned anchor Kris Pickel from the news desk. "They're being called dangerous, and in one case, violent."

Pickel kicks it to reporter Lynna Lai for a live shot in a Cleveland police parking lot.

"Good evening, Kris. Yes, Cleveland police first started seeing dirt bikes on city streets about four or five years ago, but now the problem has exploded," Lai reports, as she walks between parked police cars. "Why? Because dirt bikes are cheap, they're often stolen, they're tough to trace, and now they're becoming a dangerous trend."

A video package rolls, showing laughing children at a playground with a Lai voiceover: "They're the sights and sounds of summertime in Cleveland's Glenville neighborhood, but sometimes the sweet sounds are shattered by a loud and growing problem." They cut to a cell phone video showing how loud dirt bikes can be as they ride through a neighborhood.

It cuts to then-Cleveland police captain, now commander, Dennis Hill, standing outside the Fifth District police station: "We're concerned about the safety, obviously, of the rider, and anybody the rider might encounter: other motorists, pedestrians. It's also a quality of life issue."

The reporter then goes on to imply riders are in gangs because two dirt bike riders were murdered. "Last month, two members of a Cleveland bike group were shot and killed while riding through East 173rd and Throckley. Police call it a targeted murder. So far, no arrests.

"Meanwhile, stopping these dirt bikers would be easy," she says, "if police could catch them first."

"Our policy does not allow us to pursue," Hill says.

"You know they know that too" Lai chimes in to Hill.

"It is unfortunate that they know that," Hill responds, "but we'll live to see them another day."

"That was us," says Smoke. "When you don't understand something, that's when you try to label it."

In all its vague and accusatory tones, the report did get something sort of correct: Many, but not all, of bikes were stolen at some point in the bike's existence. The paperwork — the bike's title registered with the Ohio BMV — isn't often included when they are bought and sold. It's tough to know which ones were parted with on legal and mutually agreed upon terms and which ones weren't.

Smoke says he's been working hard to change that, especially the perception earned in the early years when some in the MPWK crew developed a reputation for straight up stealing bikes.

"My crew, we don't steal no bikes," he says. "Now, there's been guys on hot bikes, but I've been working hard to get them legit bikes."