Patricia Hanych, Longtime Owner of Pat's in the Flats, Passes Away at the Age of 82 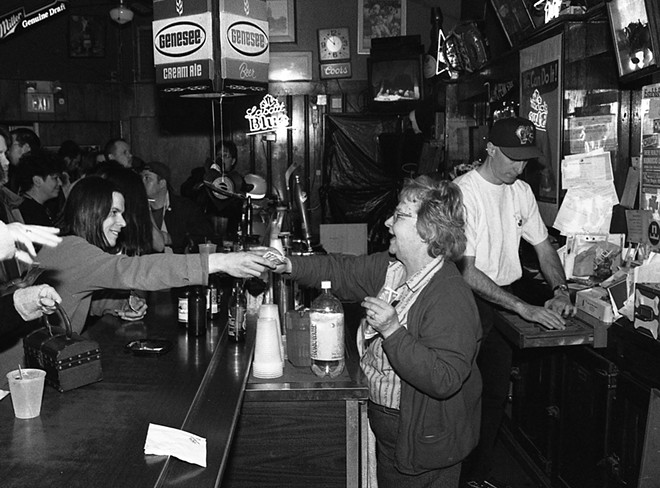 Patricia Hanych, the beloved owner of Pat's in the Flats, passed away Sunday morning at the age of 82 following a short battle with cancer.

Booking agent, confidant, bartender, pseudo-grandmother/aunt/mother of countless Cleveland musicians, Hanych closed the business, which had been in the family for more than 60 years, in 2018.

Her father, William Hanych, first purchased the property in 1945 when he opened Pickles. It became Anne's Lunch in 1951, named after Hanych's mother, and later Pat's.

Patricia, who worked at the family business since she was in high school, began booking live music in 1987, and, before long, Pat's became known as a place where aspiring musicians could get a gig, even with little experience.

Pat was always willing to give the band a shot and didn’t fuss a lot about draw and ‘meat in the seats’ conversations about presale and door count. The deal was simple: She’d pull a calendar from behind the bar, you’d pick a date, the bands took and kept the door and she did the bar.

Talking to Scene last year about the sale of the property and all the bands that came through the door, Pat said:  “I miss them, I wasn’t happy the way this all turned out in the end for me and I never expected to be a health issue but that’s how, you don’t know in life. I had hoped we could go out in a different way, in my choice instead of basically being forced out. That’s something you cannot foresee. I enjoyed it, I had a good time, and I couldn’t have asked for a better job, for me, for what I like to do, which is talk a lot and make friends…”

Ultimately it was health issues which made her give the business up. “My head says I could, and my body says forget it," she told Scene.

The Cleveland music community has been sharing memories in the days since her passing.

“There was just no pretense at Pat’s and she made a huge contribution to the city and its music scene. She'll be missed by so many," said Tony Cross, Manager of the Happy Dog and local musician.

"She was always the most supportive and encouraging person to all us creative weirdos," said Michael Baranick. "She also didn't mince words if she thought what you made, or how you behaved, was no good. Totally authentic. To me she was Cleveland at its best."

Pat was direct, didn’t mince words, was convivial at times and gruff, when necessary. She was heartfelt and compassionate but had little tolerance for bullshit. She loved people, their stories and a good fat-chewing session, if you had something worthwhile to contribute. She liked music. She loved all her dogs over the years, many of whom were seen scampering around the bar around closing time.

She is survived by her daughter Pam, her family, various cousins and her 4-year-old hound dog, Brutus.

“I once read a philosophy that I have firmly believed in ever since,” her daughter Pamela Howlett in a Facebook post Sunday morning. “To lead a fulfilled life, a person needs to have something to do, someone to love, and something to hope for. Pat did all those things in spades. She worked harder and with more dedication than anyone I ever knew. I became a lawyer to work LESS than her. She loved her customers, dogs, and family to the point of putting their needs and desires above her own. She had been through a lot, too much in fact, but always looked forward to a better day, and tried to make it happen. It is finally time to rest, mom. Well done.”

Personally, I remember many nights when the bands were done and the lights were up, along with the bar stools, and Pat was finally freed up to chat about the night and life. She'd share a laugh and raise a shot of warm Absolut vodka to cap things off. I thought of that when I saw Pat in hospice not long before she passed. It was closing time once again.

There will be a wake for Pat on Wednesday June 15th at Kolodiy Lazuta Funeral Home on State Road in Parma from 4 to 8 p.m. , and a service on Thursday at 11 a.m. and a graveside ceremony following at 12:30.

The Happy Dog awill host a celebration of her life, Pat’s in The Flats, and her contribution to the Cleveland music community from 4 to 8 p.m. on Thursday the 16th. Attendees will be invited to share memories and stories on stage.
Scroll to read more Cleveland News articles
Join the Cleveland Scene Press Club