Reaching for the Sky

Lawyer Jamie Lebovitz won't let families of air-crash victims settle for less than their due. 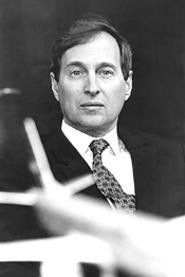 Walter Novak
Jamie Lebovitz has been tapped for advice by several dozen relatives of September 11 victims.
Jamie Lebovitz pulls out a thick black book. Titled "Estate of Robert Milne, crash of Swissair," it tells the life story of a man who died in a 1998 plane crash in Nova Scotia. School records, professional publications, and testimonials are laid out next to family photos. In one, Milne poses with his wife on vacation in Greece.

This is no mournful remembrance by a family racked with grief, but a weapon in a high-stakes lawsuit.

Lebovitz is one of a few dozen air-crash lawyers in the country. He has represented the families of victims of such notorious disasters as the 1996 TWA crash near Long Island and the EgyptAir crash near Nantucket in 1999.

His thin face, with dramatic blue eyes, has stared out of USA Today and Forbes magazine; reporters nationwide ask him to explain the legal battles that follow a crash. When Boeing announced its move from Seattle to Chicago, Lebovitz practically salivated in print over the chance to sue in Chicago's Cook County, where juries are famous for multimillion-dollar verdicts. And soon, he may find someone to sue for the biggest air disaster of all, the September 11 terrorist attacks.

Turning disaster into cash is Lebovitz's job. That's where the book about Robert Milne comes in. His law firm created it to wring the most money possible out of Swissair.

The book is meant to "bring the person to life for us," he says. "What has his passing done [to this] family?"

Since the legal system puts dollar values on emotional suffering, it's up to Lebovitz to show how much the family has suffered from its loss. Companies who don't want to take a tearjerker case to a jury will offer a generous settlement. Lebovitz gets a 20 to 25 percent cut.

He sees himself as a defender of the suffering, not an ambulance-chaser of the skies. "I consider myself a caring, compassionate person . . . My place is helping people out; [changing] a very, very terrible situation for the better."

He has handled air crashes since 1985, when he represented the family of an Ohioan who died in a crash in Newfoundland. Now, he's a partner with the prestigious Cleveland firm Nurenberg Plevin. From his spacious office, where airplane models perch atop a table and bureau, he looks down at Ontario Street through a wide, marble-arched window.

Lebovitz is becoming one of the country's top air-crash attorneys because he pursues grueling cases as far as they will go, says Chicago aviation attorney Don Nolan. A lot of lawyers will settle early, Nolan says. "I've seen lawyers that, when they're offered a million dollars, that's the largest sum of money they've ever been offered. They're quick to take it."

Not Lebovitz. After a USAir flight went down near Pittsburgh in 1994, he slogged through dozens of depositions and threatened to take Boeing, which built the plane, to trial. On the trial date, Lebovitz accepted an offer of about $7 million for his client -- much more than most victims' families got, Nolan says.

Lebovitz's voice, sometimes soft and sympathetic, rises in anger when he's asked how he finds clients. Most find him, he says tersely. "I have provided information to potential clients, but I don't actually look for them."

But in 1998, he was the first lawyer in the country charged with violating a new law that prohibits lawyers from contacting crash victims' families until 30 days after an accident. He sent letters to the family of a man who died when a private plane crashed in Colorado. He briefly challenged the law on free-speech grounds, but later dropped his suit and apologized, saying he thought the law didn't apply to charter flights.

Usually, "People who get this information welcome it," he insists. Airlines bombard the families of crash victims with legal material. "Red flags go up: 'These are the people responsible for my loved one's death!'" They want to hear from someone who'll be on their side, he says.

After Anita Bell's son died in the Swissair crash, 40 lawyers sent her packages. Once, trucks from Federal Express, UPS, and Roadway Express created a traffic jam in her driveway. An attorney friend sorted through the pile and chose three lawyers to interview.

The Bells hired Lebovitz because he projected compassion as well as business savvy. As the case dragged on, he called Bell every time another plane crashed somewhere, knowing her son and the case would be on her mind. "Jamie will be a friend to this family for life," Bell says.

Todd Peters, who lost his father in the USAir crash, says his family sought out Lebovitz after reading about him. They hired him because he spent a whole day talking to Peters's grieving mother, putting her at ease. "The first couple of [lawyers] we met at our house seemed kind of greedy and wanted us to sign a contract." But Lebovitz "seemed sincerely concerned with us."

Lebovitz pursued their case for almost three years and won a settlement of nearly $3 million.

The money "makes you comfortable and gives you a sense of protection," Peters says. But as for giving the family closure, "it doesn't help even an iota. It keeps reminding you of why you have this money." Sometimes it seems like "blood money," he says.

Lebovitz targets those responsible for spilling that blood. In the USAir case, he and other lawyers charged that Boeing knew its 737s' rudders could spin out of control, but didn't warn airlines. In the case of an Alaska Airlines jet that fell into the Pacific Ocean last year, he says the plane wouldn't have crashed if the airline had heeded an inspector's warnings to replace a worn-out part in the plane's tail.

Now, Lebovitz is looking for culpability in the September 11 attacks. He's mulling over whether the Federal Aviation Administration could be sued for not responding faster to the first signs of trouble after the hijackings. He's thought about suing Osama bin Laden or Afghanistan, trying to tap al-Qaida and Taliban assets frozen in banks around the world. And he's considered suing over possible security failures.

Such speculation infuriates Washington, D.C. lawyer Mark Dombroff, a frequent adversary of Lebovitz's. Dombroff, who has represented USAir and Alaska Airlines, says Lebovitz is a worthy adversary, reasonable and moderate, not the type who recklessly sues everyone in sight. But he calls Lebovitz's talk of suing the feds an "outrage."

Dombroff says it's unfair to expect flight controllers to have realized the hijackers would use the planes as weapons. "Nobody at that time perceived that as a threat."

Plaintiffs' lawyers have to ignore their usual impulse to find someone to blame, he says.

But Lebovitz says past terrorist attacks on airlines, and incidents where crazies broke into pilots' cabins, should have led to increased security on planes.

For now, Lebovitz and other crash lawyers are holding back. Most members of the American Trial Lawyers Association have so far respected its moratorium on suits over the attacks. Meanwhile, Congress has set up a fund victims' families can tap.

Lebovitz is skeptical about the fund. Under tentative rules, families who apply to it not only give up their right to sue; they can't appeal the amount the government gives them. Any life or accidental death insurance the victim had will be deducted from what the fund pays out. And the government is considering using mathematical formulas to determine what victims' future earnings would have been, instead of computing each person's potential wealth with the help of economists, as lawyers do in court cases.

Some people will take the government's money, but others will sue, Lebovitz predicts. It depends on how soon they need the money, what insurance they had, and how mad they are.

Several dozen relatives of attack victims have called Lebovitz for advice. The calls are igniting his zeal to punish anyone whose mistakes contributed to the disaster. He's furious, for example, that, in early November, a man got through airport security in Chicago with several knives, indicating that security is still not what it should be.

Not everyone believes it's fair to point fingers in court after an act of war. "I think it would be an indescribable injustice for anybody to be sued as a result of September 11, other than the terrorists," says Dombroff.

Even Todd Peters, whose father died in the USAir crash, isn't sure. "I don't know if we should be punished for things that are an accident . . . It just doesn't seem businesslike to me, [or] fair."

But others will be like Anita Bell, whose successful lawsuit gave her one small consolation after her son's death. "Maybe we had hurt Boeing. Maybe we'd hurt some of these people, Swissair, for what they did. We weren't being revengeful. We just wanted them to know we weren't going to stand for this."