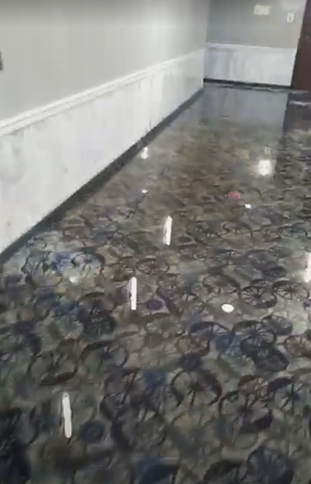 Submitted photo
Flooding in hallways after a waterline broke in the Terminal Tower apartments in June
On June 7, at around 8:30 in the morning, a six-inch waterline for the sprinkler system in the Terminal Tower Residences burst, sending water pouring down from between the 11th and 12th floor, according to the Cleveland Water Department.

Tenants of the Terminal Tower apartments woke up to the sound of water running. Upon investigation, many found water flowing into their apartment from light fixtures, water flowing through hallways, and crashing down the stairwell “almost like in the Titanic,” residents noted.


The water made its way all the way down to Tower City, where visitors also captured some videos.

Having an extremely normal one here in Cleveland pic.twitter.com/Uw8jDCr444

Tower City shut down on June 7th due to the significant water leak, and residents upstairs were left to stack their valuables on elevated surfaces and seek refuge at a loved one's home or at a hotel.

But K&D, the largest privately owned property management and development firm in Northeast Ohio, which owns the Tower City Residences and more than 40 other properties with nearly 11,000 residential units in the area, didn't seem to have a sense of urgency in addressing the situation or communicating with residents, according to some who talked to Scene.

"At this point, [K&D] had sent nothing out about the water going in everyone's apartment," said one Terminal Tower resident who wished to remain anonymous. "Nothing about what we should be doing in that instance, and how we should act. They sent out nothing."

Many residents took to their tenant Facebook group to share videos of the damage and complain about the lack of communication from K&D.

By evening, management reached out to the group's administrator, telling them the page was "unauthorized" and must come down immediately. When the admin offered to change the name and take off the picture of Terminal Tower, staff knocked on her door, told her she was violating her lease, and threatened to "get their lawyers involved."

Logan Bryant and his wife were among the first ten residents to move into the Terminal Tower Residences in 2019. This move had “massive sentimental value” for Logan. He’s someone who sees the aging Tower City complex with the luster it once had — his grandmother worked at Higbee's, and his grandfather was an electrician for the railroad.

Besides being a resident, Bryant is also a practicing attorney who knew the claims were unfounded and offered to take over the page from the previous admin.

During a flood, "the last thing [K&D] needed to be doing is going after their tenants," he said. Mainly because it took them a day and a half to even communicate to residents that the flood had happened, which they obviously already had first-hand knowledge of.

K&D didn't respond to multiple requests for comment from Scene for this article.

That's not surprising to the residents Scene spoke with.

"Communication is something [K&D] had no interest in doing," said another tenant whose apartment incurred severe damage by the flood. It took several days to get a response to his maintenance requests, and when they came into his apartment to repaint his walls, which took three days, he got no note or notice of how long it would take or when they'd be coming back.

When he called the developers with his concerns about communication and his remaining maintenance requests, they told him, "'95% of your requests have been fulfilled. I don't know why you're fighting for the last 5%,'" he said. "When I'm showing them pictures of my apartment that still has damage, and they respond with, 'That's good enough,' it tells me they're used to doing a subpar job," the tenant said.

And former residents of K&D units will not be surprised either.

In 2014, K&D settled with 80 condo owners at Stonebridge Towers, a luxury condominium complex in the Flats, who alleged the company failed to repair a decade's worth of water damage that occurred due to subpar installation. K&D paid $12 million.

And in 2016, a resident at Reserve Square detailed his experience with a flooded unit and K&D's lackluster response.

On the upside, the mall downstairs is now water free and will still be a mall.