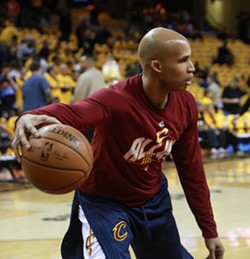 Richard Jefferson’s Snapchat account (home of Lil Kev) has been a revelation the last six weeks not only because it’s the most entertaining, unmanaged, behind-the-scenes window into Cavs team spirit but because it shows an entirely different side of Jefferson.

On the court he has a somewhat stern, no-nonsense demeanor, and in postgame interviews he’s a polished vet, with keen, honest and unvarnished but never unprofessional commentary. (Hi, Chuckster!) Even in the locker room there are but momentary hints – maybe a look or inside joke that causes Kevin Love to crack up – of the loopy funster hidden inside. It’s partly by design. 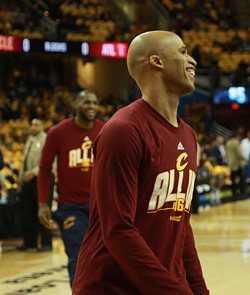 “I’m really goofy at the end of the day. I’m very silly off the court. I’m always joking around. I’m a Phoenix, Arizona kid. I’m not this Chicago tough guy. I’m not this New York gritty kid, I’m not this New Jersey guy. Those places are synonymous with toughness. That’s’ not me, I’m from Phoenix. It’s sunny all the time and it’s beautiful,” says Jefferson after practice last week.

“It put a chip on my shoulder because I felt like even when I was in high school and playing in AAU people constantly tried me. People were constantly trying me to think, ‘he’s not this,’ ‘he’s not that,’ ‘be physical with him.’ And it’s okay, I enjoy that,” Jefferson smirks.

“It’s funny,” he continues. “Once I got my chip on my shoulder – and I had this at a young age – people stopped trying me. People never talked to me. People didn’t try to elbow me, people didn’t try to do anything dirty. I think it goes to show that you don’t have to be this loud in-your-face tough guy. If you can just hold your own and won’t back down, people will leave you alone.”

Well, leave you alone in a manner of speaking. Nobody wanted to leave Richard Jefferson alone when it came to college recruiting. Jefferson was a McDonald’s All-American in 1998 alongside guys like Rashard Lewis, Mike Miller, Al Harrington and Tayshaun Prince.

Not only that, but Jefferson was a lauded high school junior featured in a five-page Sports Illustrated article on recruiting and the challenge for young preps. He was sort of “The Chosen 0.5”, a precursor for James’ reign five years hence. (He too got a tattoo shortly after the story ran.) 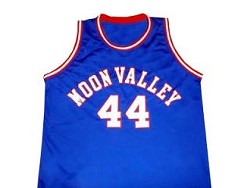 No, Jefferson hasn’t mentioned this to LeBron, though they do know he starred at…. Moon Valley High. The rest of the team is aware of this “and make fun of that on a daily basis,” according to RJ.

“At the end of the day if I start going tit-for-tat with him, he’s going to win,” he says. “So I don’t really let anyone know. That’s something that my close friends who knew me growing up, see me in it and more my family members. And one day I’ll show my son.”

He was good enough that Channing Frye’s parents sought him out at one of those basketball camps, hoping Jefferson might take a fellow Arizonan Frye, two years younger, under his wing.

“Richard was ‘The Man’ in Phoenix – he could just dunk a whole bunch,” Frye cracks. “My dad asked him hey can you teach my son what you’re working on. Right then he was working on Js. I was like 6’5” or 6’6” and skinny, and ever since then we stayed in touch, and then my junior year when I signed to University of Arizona he came down and watched me play in the championship game.”

(Jefferson would also provide guidance to Frye as a rookie when he was drafted by the New York Knicks while RJ was playing for the New Jersey Nets.)

In truth, Jefferson had been in need of guidance just a few years earlier. Despite some abundant nature gifts, Jefferson didn’t play any freshman basketball because he was academically ineligible. So his high school coach John Boie sort of challenged him to spend the year practicing with the seniors.

“[He] put me around them to see what these guys were working for, to see how hard they worked, to see the type of camaraderie they had,” Jefferson says. “That was something I learned. And my sophomore year I came back and [Coach Boie] was like ‘Hey, I can’t put you on varsity if you’re going to be ineligible. It’s unfair to these guys.' And I understood what he was saying. These guys work too hard to have me play one week and not play the next.

“That was kind of the first time I started changing things up,” he says. “At that point I had no motivation. I enjoyed playing basketball. My motivation, like a lot of kids was, I go to school, my grades are whatever. Then all of a sudden you get a little bit of motivation at the right time and good things can happen.”

His Moon Valley teammates Marc Murphy and Travis Brown made a huge imprint on Jefferson. They truly taught him what it meant to be dedicated to something and take care of business like a professional.

“They were the first true leaders I had ever been around in my entire life,” RJ says. “I just played basketball for fun. I just talked trash with my friends. I did it all day just because it was a hobby of mine. Those were the first guys I saw working every day lifting weights and running, taking it like it was more than a hobby. They wanted to make something of themselves and I owe a lot to them.” 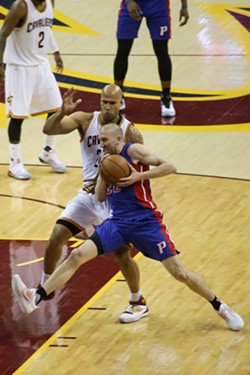 Jefferson’s parents, John and Meekness LeCato, are pastors at Shabach Word of Faith Christian Church in downtown Phoenix. Jefferson and his two older brothers joined them on missions to Africa on multiple occasions, exposing him to different cultures and lifestyles most young people could barely dream of. It helped make him a more rounded person.

Frye wasn’t totally joking about Jefferson’s skills. He was better known for his defense and athleticism than his shooting. That was the early knock on him.

“If you get 5-10 years and you actually take the game seriously, it’s easy to work on things and get better,” he says. “I’ve gone form a guy that was left open that could not shoot a 16-footer to now a guy that teams don’t want to leave. And I still look back on my career and think I could’ve done more, there’s more I could’ve accomplished. You always look back on things and evaluate yourself rather harshly, but you can improve on so much over a period of time.” 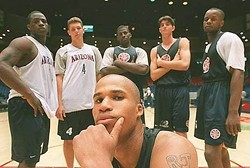 Jefferson stayed close to home signing with Arizona and coach Lute Olson. He played with Gilbert Arenas and Luke Walton, and never averaged more than 11.3 points/game during his three years, but was the only one taken in the first round because of his all-around skills. Like LeBron, he was the kind of player that competed hard on defense and excelled at getting others involved, averaging almost three assists/game across his college career.

Olson is a legend for a reason. Jefferson sees him as a grandfather-figure who created a true feeling of family in his program, for which RJ’s eternally grateful.

“He’s a person I love dearly and I owe so much to him, and not only him but his family,” Jefferson says. “He is the epitome of what you’d expect from a college coach building a family atmosphere. It’s something I want to say is a lost art in college sports.”

Jefferson was drafted onto a New Jersey Nets team on its way to consecutive NBA Finals appearances. Despite joining a veteran team competing for championships, Jefferson had pushed his way onto the starting squad by his second year.

“We had a defensive minded team and towards the latter part of my college career I started to focus more on defense and it helped our team succeed,” Jefferson says. “So that was kind of my calling card, and it allowed me to get on the court as my offense started to develop. So I always tell people, defense is the key to getting out on the court.”

This is Jefferson’s first return to the Conference Finals since those two losing Finals runs with Jason Kidd and the Nets. It makes him appreciate this run that much more.

“I’m enjoying this experience a lot more because I know, it’s been thirteen years since I’ve been to a Conference Finals. I’ve been on 10 different playoff teams. I’ve won so many different division titles. So I’ve been on successful teams, but is just really tough to get this far,” he says. “I don’t think people realize how impressive it is, LeBron and Champ winning so many Conference titles. Just for me in general, I’m enjoying it because I don’t have another 13 year stretch to wait.” 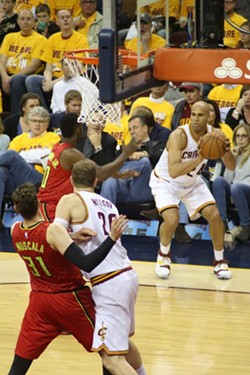 Though we didn’t get to ask Jefferson about it, all you need to know about him on some level is that he scored 22.6 and 19.6 points/game as a 27- and 28-year old playing with the Nets and Bucks respectively. He was at the top of his game and an all-star, but took a smaller role scoring in the low-double digits with the San Antonio Spurs because he believes in "team" and he values winning above all.

Asked about the confusion about roles in December when Iman Shumpert and Kyrie Irving returned from injury, there was no static on Jefferson’s end.

“You have to be intelligent enough to know [the deal],” he says. “There were games I was playing 35 minutes. I don’t want that crap anymore! I don’t need that. Gimme 15-20 minutes because at the end of the day. I’m looking long term. If you have me playing 35 minutes long term, by the time I get to this point in the season, I’m going to be exhausted. My body is going to be banged up.”

He goes on to echo the thoughts of James Jones in saying this is the best time of the season. All regular season you’re doing work and making sacrifices that they’re able to reap now. That, according to Jefferson, is what we’ve seen in the playoffs.

We'll be at the Q for tonight's game against the Toronto Raptors.

Expect a hard fought match as the Raptors clean up some of their sloppy ball-handling and try to offer better help on penetration by Kyrie Irving and LeBron James, without unleashing a flood of open 3s. It's quite the balancing act. Also look for more of James Johnson and Demarre Carroll as Toronto tries to diversify their offense more to take the load off Kyle Lowry and DeMar DeRozan's shoulders.

We'll be posting video, analysis and snark from the game. You can follow along on Twitter @CRS_1ne, and read our postgame analysis Friday morning, here in the Scene & Heard section.