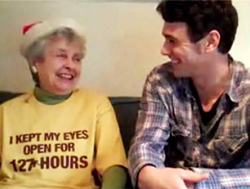 Although she was perhaps best known as the grandmother of actors James and Dave Franco, Mitzie Verne was better known in the local art community as a tireless champion of Japanese and Asian artwork. She and her husband Dan established the Verne Collection in the 1950s in a small building near Murray Hill in Little Italy. It’s with a heavy heart that we inform you of Mitzie Verne’s passing yesterday. She was 93 years old.

Last summer, we told you about a very special art exhibition by James Franco and his brother Tom. The brothers (along with their brother Dave and other family members) came to Cleveland to exhibit James and Tom’s artwork in a tiny, relatively unknown gallery in Little Italy called the Verne Collection. The opening drew thousands of guests – some from as far away as California and Florida – most of whom couldn’t even get in the door before the event was over. However, James accommodated his adoring fans by signing autographs on the sidewalk outside the gallery.

The biggest question was, “Why the Verne Collection?” It was a gallery specializing in Japanese and Asian artwork that almost no one outside the local art community had even heard of, but the gallery was extremely special to the Franco family.

The brothers’ maternal grandparents, Dan and Mitzie Verne, founded the Verne Collection after living in Japan for two years. The intimate gallery specializes in Japanese prints and paintings.

The Vernes and Francos have always been close, despite the grandsons growing up in Palo Alto, CA. James is the oldest son of the Vernes' eldest daughter, Betsy, and her late husband, Douglas, who passed away in 2011. James has two brothers – Tom and Dave.

It seems talent is in the family’s genes. The boys’ mother Betsy Franco is a prolific writer, having published more than 80 books. Occasionally, she collaborates with Tom on various projects. Last summer’s exhibition included a number of Tom’s illustrations created for his mother’s book, Naked. In the book, famous sculptures by Auguste Rodin and Camille Claudel come to life.

You may have also seen Mitzie Verne at the Academy Awards the year James co-hosted, sitting next to James’ youngest brother Dave, who is becoming quite the accomplished actor himself (Neighbors, Scrubs, 21 Jump Street). Or you may remember her from Funny or Die, when she called us all “Pussies” for not liking 127 hours, starring her grandson James. There was no doubt that James and his grandmother loved and respected each other very much.

Unfortunately, Mitzie R. Verne passed away yesterday (May 1), just over a month before her 94th birthday (June 16). Verne was born in Cleveland, and raised in the Glenville area on Drexel Ave., near East 105th St. Mitzie had two older brothers, Robert (Levine) and Alfred. Robert and his wife Anne owned and operated Publix Book Mart.

Mitzie’s father (Manuel Levine) came to the US from Russia in the 1890s. He attended Western Reserve University, eventually becoming Chief Justice of the Court of Appeals. Although rarely opposed for office, when he was, his wife was always campaigning for him. Manuel Levine passed away when Mitzie was just 15 years old.

Mitzie met her late husband Dan while still a senior in high school (Dan was a freshman at Adelbert College). Their mothers were in the same sewing circle, and the mothers insisted that Dan take Mitzie to his fraternity’s Thanksgiving Dance. While Mitzie attended Mather College, Dan studied at the Western Reserve’s Dental School during WWII. The two dated for nearly 7 years. Dan graduated dental school on June 12, 1945, and the two were married just two days later (and two days before Mitzie’s birthday).

Dan was in the reserves during dental school (WWII), and was inducted into the US Navy immediately after the wedding. At the start of the Korean War, Dan was recalled to the Navy – first to a Naval Hospital in San Diego, and later to Yokosuka, Japan. About six weeks after Dan got to Japan, Mitzie arrived with their daughters, Betsy (5 years old) and Heidi (2 years old). Michael Verne wasn’t born yet.

Their time in Japan began a lifelong love affair with Japanese art. Upon returning to Cleveland, the Vernes established the Verne Collection in Little Italy in the 1950s, and quickly became the region’s most respected experts on Japanese art. The Vernes returned to Japan nearly 20 times. Retired for about 30 years now, the couple passed the gallery down to their son, Michael (James, Dave and Tom’s uncle), who now serves as president of the Verne Collection.

Services will be held at 2:30 p.m. on Tuesday, May 3 at the Anshe Chesed Fairmount Temple (23737 Fairmount Blvd., Beachwood). The family has asked anyone wishing to do so to contribute to the Asian Studies Program at Case Western Reserve University or the Cleveland Museum of Art.