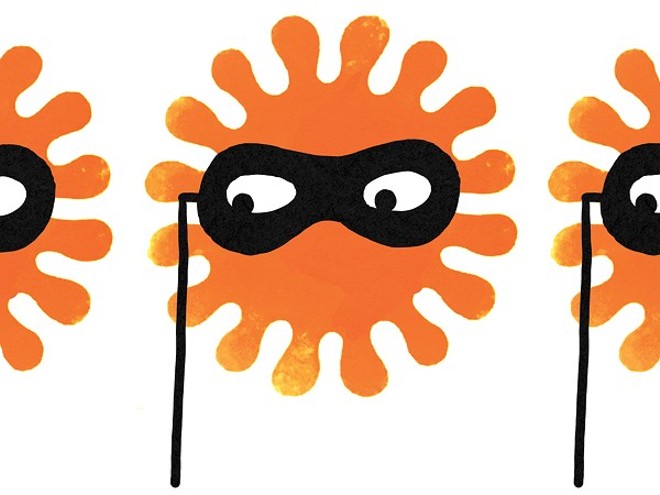 We're a happily married couple from Europe, longtime readers, both in our 30s, and both interested in having sex sometimes with other people. Before the pandemic we were invited to a private sex party in a major European capital. It was an age- and face-controlled swingers night with background checks on every participant. It was our first experience and it was eye-opening, wonderful, and very sexy, even though we were too shy to fool around with anyone else. But we promised ourselves we would return and explore further. Then COVID-19 happened and we couldn't travel. We decided to hook up with other people locally. We had amazing threesomes and foursomes, and it all went ridiculously well, up until the part when we got herpes from another couple. This other couple didn't know they had it or didn't bother to disclose. Herpes isn't as common here as in the U.S., as far as my research went, and it was a huge bummer, but after educating and medicating ourselves, we decided to continue having hookups with others. We tell everyone in advance because we believe it's the right thing to do. Some cut us off, some don't care, some admit they also have it, which always leaves us wondering if they would have admitted it without us "coming clean" first.

P.S. I found a piece of advice online about this issue from Betty Dodson, written in 2009, but I'd love to hear your thoughts.

Hmm. I would think an invite-only swingers party with "age- and face-controlled" background checks (meaning: no olds*, no uglies**) would also put a few questions to prospective attendees about sexual health. If the organizers of this party don't require you to disclose that you have herpes or other sexually-transmitted infections — because they enforce safer-sex protocols that minimize the risk of transmission and/or they quite rightly assume that anyone down to sex with 50 strangers in a single evening either already has herpes or is at least willing to chance it — then I don't think you have to disclose.

Don't confuse "don't think you have to" with "don't think you shouldn't." I think you should disclose — I think you should keep disclosing — and if disclosing gets you scratched off the guest list, SWAPPED, you will have other opportunities to fuck other people in other major European capitals. I mean, you've been disclosing to couples locally and haven't exactly wanted for opportunities ... even during a pandemic. (People who weren't worried about catching COVID-19 during the pandemic — which isn't over yet — probably weren't too worried about catching herpes.) Yes, some couples ghosted after you disclosed, but it sounds like just as many or more weren't scared off. And the couples who ghosted? Some already have herpes and don't know it — and HPV, as well, SWAPPED, as both of these very common STIs are easily transmitted through skin-to-skin contact.

Anyone who wants to avoid contracting them shouldn't have multiple sex partners — or. arguably. any sex partners at all, considering how common these infections are and, again, how easily transmitted they are. And anyone who attends orgies — anyone who's sexually active at all — should get regular STI screenings, get treated for treatable STIs, and refrain from having sex (or attending sex parties) when they're symptomatic or still infectious. (And everyone can and should get the HPV vaccine, and people with herpes can take meds that make outbreaks less frequent and less intense and make them less likely to pass herpes on to others.)

And while it's my official position that you should disclose — because, like you, I think disclosing is the right thing to do — my unofficial position is that anyone who has sex with 50 strangers in a European capital, be it major or minor, has volunteered for herpes.

P.S. The late, great Betty Dodson was never one for mincing words. Not only did Dodson tell a couple with herpes that they didn't need to disclose unless asked in the column SWAPPED found, Dodson also shared that she didn't tell her own partner she had herpes until she had an outbreak 10 years into the relationship. ("Orgy Guilt Because We Didn't Share We Have Herpes," July 7, 2009). "I abhor how our society has turned Herpes into an STD," Dodson wrote. "My first genital herpes outbreak was in the seventies. If you didn't have Herpes back then, it meant you weren't having sex. It was more like a badge of sexual abundance."

I'm a 24-year-old heterosexual French man. (Sorry for my English.) I really love my girlfriend. Our relationship is deep, we listen and understand [each] other, and we take care of [each] other. The sex is great, truly great. We try many different things, and we try to fulfill our common desires and the desires of the other. Long story short: Everything with her and our relationship is perfect. The only thing is that she wants our relationship to be monogamous, and I would like to have sex with 75% of the girls I bump into. Normally this is not a big deal because ... I'm not particularly attractive, so there are not many girls that want to have sex with me. But during the four years we have been together, I had some opportunities to which I had to say no. Once I kissed another girl, and the day after I confessed this to my girlfriend. Now every time I find myself attracted to someone else, I immediately tell my girlfriend. She doesn't blame me for finding other women attractive or even when I confess to flirting with another woman, but I know she doesn't feel good about it. If I have to choose, I will always choose her — but I love to flirt. I would also love to see how is sex with someone else, as I have never had sex with anyone else. But at the same time, I don't want to hurt her, and I feel childish for not being able to control my instincts. How do people get out of these sorts of situations?

First ... your English is way better than my (non-existent) French. No need to feel bad about that.

Second ... if you wanna feel bad about something, DESIRE, feel bad about being a jerk to your girlfriend. In other words, OH MY GOD, DUDE, SHUT THE FUCK UP. Stop running to your girlfriend to "confess" every time you have an impure thought about another woman. Constantly and needlessly reminding your girlfriend you would like to fuck other women is just cruel. She knows that, DESIRE, so you don't need to tell her. You're not being honest, you're not being transparent, you're being an asshole. This is a relationship, DESIRE, not a meeting of Reluctant Monogamists Anonymous. ("Hi, my name is ASSHOLE BOYFRIEND and I've been monogamous for four years and each day is a struggle.")

*Age is just a number, of course, but people, alone or in groups, are allowed to seek sex partners in their own and/or their preferred age range — and I say that as someone who would most likely be excluded from this particular sex party based on my age.