Screwed by the Bulb

The downside of green light bulbs: Hundreds of layoffs in Cleveland. 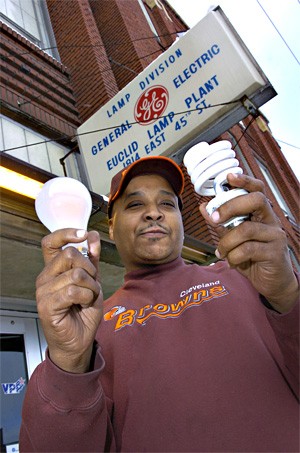 Walter Novak
Johnny Perry is one of the 425 workers who will lose their jobs when GE closes its light-bulb plants.

Chuck Masilonis sketches electrical drawings on the back of a notebook with chapped, scarred fingers. He's trying to explain the inner workings of a light bulb, the various tubes and glass globes he's dedicated the last 28 years to producing.

It's not easy for an outsider to understand. Masilonis is a small cog in a massive machine that most of us never think about — the men and women who heat sand for projector lamps and give those tear-shaped ceiling-fan bulbs their glimmering hue.

For decades, many of these intricate pieces were produced on East 152nd Street, East 45th, and in Willoughby, Conneaut, and Austintown. Thanks to General Electric's lighting headquarters in Nela Park, hundreds of people found jobs in the company's plants.

Masilonis, who heads their union, remembers plant hallways that felt as crowded as high-school cafeterias, full of men who'd signed up for a lifetime of healthy wages and good benefits, just like their friends at GM or Ford. As recently as the mid-'90s, GE was still hiring people in Willoughby to make the ceramic innards of bulbs used to light highways.

But today these plants have the eerie emptiness of a Hitchcock movie. After allowing the head counts to dwindle for years — only five people now work on 152nd — GE recently announced it will shut down six local factories, killing off 425 jobs by next fall. The work has gone where most work goes these days, to places like China and Hungary. Yet this time, the rationale involves more than cheap and plentiful labor. It's about going green. And GE, like Ford or Chevy, didn't see the dollars inherent in saving the planet until it was too late.

Many GE workers produce incandescent bulbs — the lights that have illuminated American homes for the last century. But thanks to a new federal energy-saving law, these dinosaurs will effectively be banned by 2020. Instead, we'll likely be buying the far more efficient compact fluorescent lamps (CFLs) — spiral-shaped bulbs that resemble tiny white bedsprings. They may cost 10 times the price of a regular bulb, but they also last five to eight years and cut down on energy use. Unfortunately, they're also made in one of the world's worst-polluting countries.

That's because the most popular CFL is not easy to produce. Invented by a GE engineer in the 1970s, it was made of glass that had to be heated and bent into a swirl shape. GE thought it would be too expensive to mass-produce, so it shelved the idea.

The company came up with another version in the early '90s, but still couldn't manufacture it cheaply. "We were hand-producing those for prototypes," says spokeswoman Janice Fraser. "They were so expensive to make."

Other big lighting companies, such as Philips and Westinghouse, were having similar problems. The early versions of the CFL cost around $20. No one wanted to invest money in a bulb that cost more than dinner at Applebee's.

"I don't think any of the lighting companies had a crystal ball to say, OK, in 2007 there's going to be a real focus on energy," Fraser says.

Maybe not, but America's biggest companies have been slow to recognize the green economy going back to the gas shortages of the '70s. By the early '90s, China — perhaps the most polluted country on earth — was seeing what Americans did not. It began employing scores of workers to make the glass part of CFLs by hand. In subsequent years, technology improved and prices fell.

Today, China produces an estimated 80 percent of the world's CFLs. And America's biggest producer is TCP, headquartered in Aurora. But its factories are in China.

GE is also creating light bulbs in China. Its divestment of production in Ohio is born of simple economics: Why pay workers here $23 an hour, when people in Budapest will work for $4 an hour?

Moreover, American factories aren't suited to make CFLs. "It would cost literally tens of millions of dollars to retrofit a plant," Fraser says. Even then, because of labor costs, the bulbs' price still would prevent them from competing well with those made in China. "You have to be able to produce these bulbs at a price that people are willing to pay."

To workers, such harsh economics aren't pleasing to the ear. Last year, they launched a "Screw That Bulb" campaign to tell people how the new technology was costing them jobs. They don't see why the CFLs — or other higher-efficiency bulbs being developed — can't be manufactured in the same place incandescents have for the past century.

"The facilities are here," says union official David Raleigh. "They own the buildings. You have a trained workforce that can be adapted. It really is a shame."

He curiously blames GE for allowing wages to spiral skyward. In recent years, the union agreed to lower pay rates, such as going from $23 to $10 for new workers. But they still can't compete with the Chinese.

One of the most visible victims of the shutdown will be the 120-year-old Euclid Lamp plant on East 45th Street, where union president Johnny Perry claims Thomas Edison once worked. About 125 employees here still make incandescent and halogen bulbs.

"Hate to see these skills go to waste," Perry says. "These people been busting their butts in production jobs for years."

When the plant shuts down in October, workers will be given the option of retiring, accepting layoff benefits, or possibly transferring to jobs in GE's aircraft or locomotive plants. But no one's hiring near Cleveland, Perry says. And for the many middle-aged workers, it won't be easy to uproot their families to build trains in Erie. "Lots of these people never filled in applications before," Perry says.

Perry started working at Euclid Lamp 28 years ago, when the plant employed 650 people. Rumors of a shutdown have circled for years, but the end came "sort of like a punch in the stomach" after the union had just negotiated a new contract.

Now he'll watch his plant become yet another industrial albatross for Cleveland, providing an unwelcome reminder of a company that once brought "good things to light."