100 Things Every Clevelander Must Do Before They Die (Or Move, Which Is Really the Same Thing) 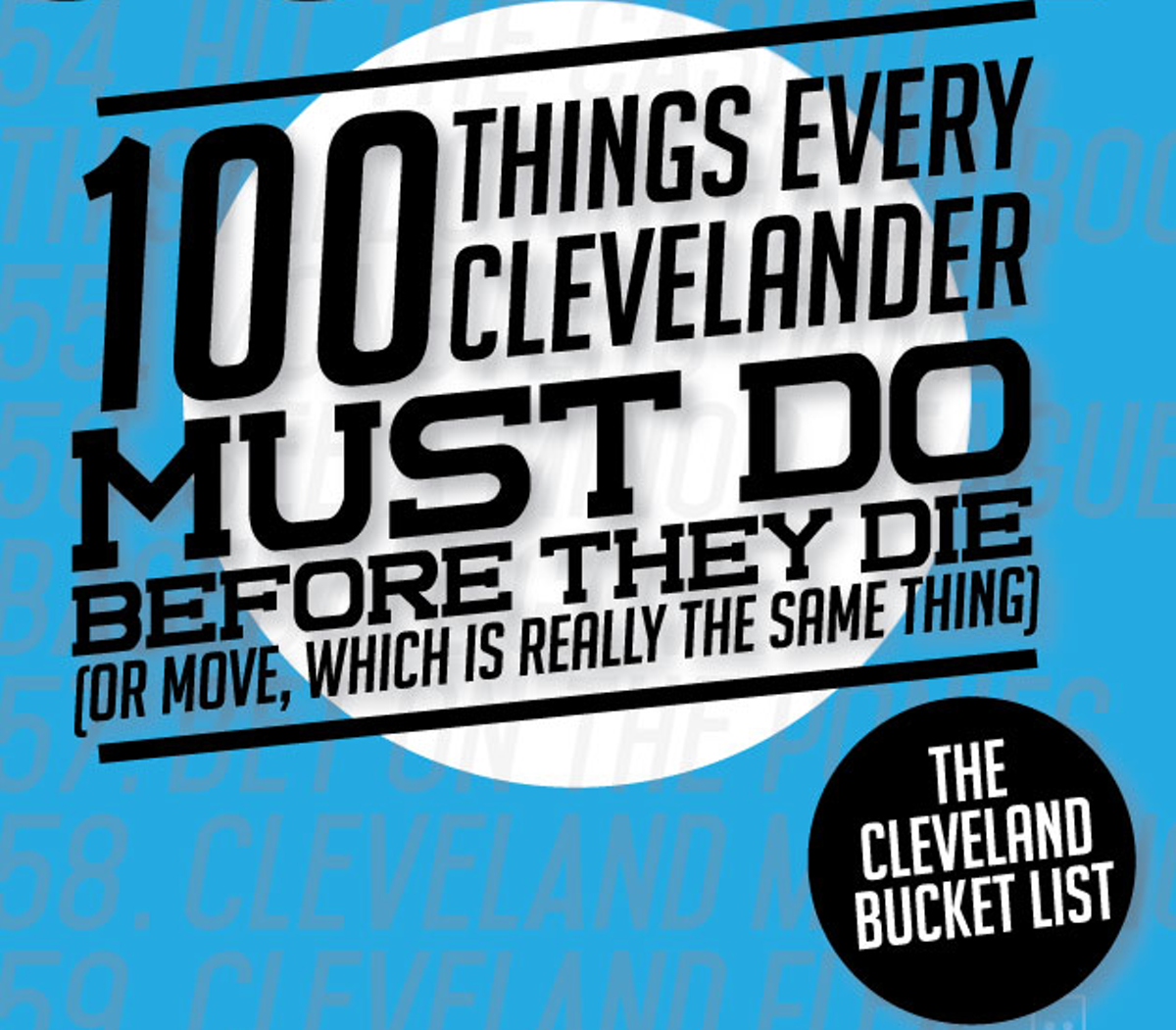 It happens with startling regularity. You'll be talking with a family member or friend who's lived in Cleveland their entire life, and you'll bring up a quintessentially Cleveland event or place -- say, the Rock Hall, or the Velvet Tango Room -- and they'll mention that they've never been. Huh? But? How? Why? Really?

We started thinking about a Cleveland bucket list a few months ago, partially based on familiar sentiments like the one above. It seems that Clevelanders, while enjoying their backyard, don't always explore every nook and cranny. We're guilty of it too, which is also why we set out to provide a remedy.

The problem, naturally, was narrowing down the list to only 100. There are, by last scientific count, 37,126 amazing things happening in our city on any given day. The final 100 we came up with seemed to us a proper representation of Northeast Ohio -- the food, history, fun, landmarks, events, sports, arts and everything else that defines who we are.

Maybe you've done half of these things already. Maybe you've only done 25. Whatever the case, we promise you'll have fun exploring the list (presented in no particular order) and making plans. (Print a handy version of this list for your fridge or office here.) Enjoy.

1. Visit Lake View Cemetery: The final resting place of John D. Rockefeller, Eliot Ness, Revolutionary War soldiers, Ray Chapman and more famous and influential people than we have time to name, Lake View Cemetery is also, of course, home to the President Garfield memorial. The view from the second floor balcony is one of the most majestic and underrated in the whole city.

2. Spend a Day at the Rock Hall: Bitch about who's inducted and who's not if you want -- that's half the fun! -- but you can't take anything away from the stunning, unparalleled collection of rock history sitting in the glass pyramid by Lake Erie.

3. Take a Trip on the Cuyahoga Valley Scenic Railroad: Not everything on the list is in Cleveland proper, but there are certain Northeast Ohio expeditions that we'd be crazy to exclude. Here's one: Take a trip on one of the longest, most historic railway tours in America through the 33,000 acres of the Cuyahoga Valley National Park.

4. Take a Tour on the Goodtime III: You can brush it off as lame if you want (it's not), but you're hard-pressed to find a better daylong tour of some of the city's finest sights. Step on the boat for Roar Along the Shore, an annual traveling showcase concert for local bands, if you don't want to take a normal tour.

5. See a Movie at Cedar Lee: There's only one theater in Cleveland showing the best movies to come out each year, and not just from Hollywood, but Bulgaria or Australia or an indie filmmaker in Montana. The Cedar Lee wins Best Movie Theater every year for a reason.

6. Take a Tour of Great Lakes Brewing Co. and Have a Pint: The craft brew renaissance in Cleveland began with the Conway brothers in 1988 and continues unabated today. Great Lakes is the anchor of the Ohio City brewing district, responsible for Christmas Ale, of course, and a local name known and respected around the country. Take a tour of the brewing facilities and see how it's done.

7. Buy Your Groceries at the West Side Market: After celebrating its centennial and enjoying one of its busiest years in recent history, there's not much new to say about Cleveland's public market. It's the envy of folks around the country, stocked fully with the most delicious food in town no matter your taste and... well, come on: Just go buy your stuff there already.

8. See a Flick at the Cinematheque: Tucked away in University Circle is one of Cleveland's best hidden gems -- a place where you can see the best foreign, independent and other movies that don't make it to local theaters, plus a truckload of re-releases, new prints, award-winners from overseas and historical flicks.

9. Go to a Playoff Game: The real sports bucket list entry here is really to see a championship, but, you know. Other than that, we'll take a playoff game, and of the inept trio we have the privilege of calling ours, the Cavs have the most recent string of luck getting there.

10: Take a Tour of Gotta Groove Records: Gotta Groove has been pressing vinyl records in Cleveland since 2009. Since then, they've become an industry leader in not only sound quality, but customer service and general awesomeness. They can press up to 70,000 records a month, and that's high-quality vinyl coming right out of downtown.

11: Toboggan at the Chalet: Winter! Screaming! Fun! If you want to toboggan, there's only one place to do so. You've skied, sledded and ice skated, but to properly round out the winter sporting experience, slide down a chute of ice while the cold air blasts your face.

12. Eat at Melt Bar & Grilled: Matt Fish has built a cheese empire. From humble beginnings with one Lakewood location to a cadre of grilled cheese restaurants across Ohio, Melt is one of the defining culinary touch points of Cleveland and the subject of just about every travel show that rolls through town.

13. Take a Trip to Put-in-Bay: Northeast Ohio's private little island getaway has seen its share of drunken escapades. Go add your own dose of debauchery, or simply enjoy the laid-back atmosphere and serene surroundings.

14. Go to a High School Football Game: Ohio is crazy for high school football. Outside of Texas or Florida, the Buckeye State is home to the most rabid fans and competitive teams. Take in any local game to see for yourself, whether it's the Ignatius vs. Eds Holy War, Glenville, Willoughby South, Canton McKinley or your local squad. It's one of the best times you'll have watching sports all year.

15: See a Play at Near West Theatre: Cleveland has one of the best theater scenes outside of Broadway, and that goes for touring acts as well as homegrown productions. Near West is "a grassroots theatre benefiting youth and adults." Local theater is good theater, and the Cleveland arts scene is better for having these folks around.