The Harp Can Keep Hosting Live Music, Zoning Board Rules 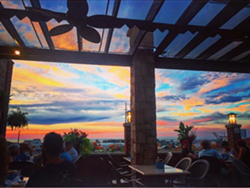 And if that wasn't enough, an army of community supporters showed up to signal their support for The Harp as well, calling it "the heart and soul" of Cleveland's Irish community.

Indeed, community support has been strong ever since the zoning issue first appeared before the BZA back in June, 2012. (And the vocal support has redoubled in recent months, particularly on social media, as complaints related to the permitting of Ohio City businesses have picked up considerable steam).

In May, 2014, the eighth district court of appeals remanded the case back to the BZA to determine whether not granting the variance would cause The Harp unnecessary hardship. The BZA ruled that it would.

So the Harp now gets an expanded use permit, moving from a "bar/restaurant" to a "bar/restaurant with live entertainment, including outdoor entertainment." The variance was required because The Harp is located within 500 feet of a residential zone, and one resident, Julie Kurtock, initially complained about noise.

Kurtock gave no testimony today, but Cleveland.com reported that her lawyer, Alan Rapaport, argued the legal (as opposed to emotional) angle. The Harp really has to show that the location was unsuitable for use as a bar without live entertainment, he said.