It's a dewy, fragrant, late summer morning in historic Willoughby, Ohio, 20 miles east of downtown Cleveland. And in the meeting room adjacent to Mayor David Anderson's office on the second floor of City Hall, the mood has gotten tense. Maggie Rice, a 28-year-old activist, Willoughby resident, and recent contributor to the News-Herald's "Another Viewpoint" section, is confronting Anderson about the Confederate flag.

She's here on behalf of the activist network Organize Lake County. Much like Organize CLE, the Lake County collective picked up steam in the wake of Tamir Rice's death and allied itself with the Black Lives Matter movement. In Willoughby, Rice and her cohort have been unpopular ever since they installed themselves across the street from a law enforcement appreciation rally in January.

As promised in her News-Herald editorial, Rice is now presenting the mayor a list of demands. At the August Last Stop Willoughby Parade, there was a float that flew a panoply of Confederate flags, and Organize Lake County would like one of two things, Rice says: that Willoughby issue an official apology and brand the party responsible for the float a "hate group," and/or that Willoughby remove itself from future parades entirely, to communicate that it will not associate with hate groups or spend taxpayer dollars on public events that might be interpreted as supporting them.

Rice, wearing a hat with a Black Lives Matter pin, is methodical as she presents a packet of information to Anderson. She first highlights the history of the group in question — it's the local camp of the national Sons of Confederate Veterans — and traces a media narrative of the national group's affiliation with the League of the South, a known racist organization. She then chronicles an abbreviated history of the Confederate battle flag.

"The Confederate flag, we are told, represents heritage, not hate," reads a quote from Southern historian Gordon Rhea, in Rice's packet (a copy of which she provided Scene). "But why should we celebrate a heritage grounded in hate, a heritage whose self-avowed reason for existence was the exploitation and debasement of a sizable segment of its population?"

Mayor Anderson, blue-blazered and bespectacled, listens intently across the table, having granted Rice the courtesy of a private audience even after she and three other Organize Lake County reps met the previous week with law director John Wiles, your standard churlish suburban law director (i.e., partner at Wiles Richards, a firm specializing in suburban municipal law), and made no progress. But it's clear this morning that though Anderson is happy to meet with Rice and hear her out, he has no interest in meeting her demands.

"I'm certainly willing to say the city's never going to do anything to support a Confederate flag," Anderson says, after stressing that though the flag may be offensive to people of color, First Amendment rights take precedence over municipal preference. 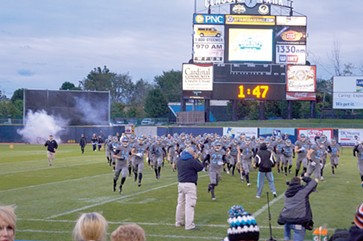 His rebuttal is essentially twofold. On one hand, he tells Rice, it's the parade organizers, the downtown business owners who comprise "Heart of Willoughby," who make the decisions about the floats. They typically only select groups who have been vital to the economic resurgence of Willoughby's downtown. But they can't legally censor anyone on a public street.

That's not entirely accurate. Heart of Willoughby president Kathi Cannon, who owns a New York-style deli on Erie Street, says that "all registrations are accepted and welcome to march in the parade as long as they follow the rules and regulations" included in the registration materials (italics added for emphasis). Those rules stipulate that, although "the parade is not a forum for any particular political, religious or social point of view" (Rule #4), "The Heart of Willoughby Inc.'s decisions regarding parade entries, their eligibility, placement and judging is final" (Rule #5). So what they say goes.

But moreover, Anderson takes pains to explain, the City of Willoughby only has two opportunities to march in parades every year, at the Last Stop Willoughby event and on Memorial Day. Every politician who represents the people of Willoughby takes advantage of both, to greet and celebrate with constituents — to, in Anderson's words, "throw candy." The idea that the city wouldn't participate, he suggests, is insane.

This summer, the Sons of Confederate Veterans took home first place honors in the "classic vehicle" category, marching alongside their parade partners, the United Daughters of the Confederacy. Floats were judged, according to Kathi Cannon, by the All-American Parade Judges Association, Inc.

As to the SCV's contribution to Willoughby's economic vitality, Scene won't here speculate, but Anderson says the local camp, helmed by a Mr. Curtis and Mrs. Gloria Early of Willowick, is most definitely among the "historical" faction within the apparently bipolar national organization. Mayor Anderson hashed things out with Mr. Early over coffee, he tells Rice, and believes that he and his wife care much more about things like genealogies and gravestones than they do about politics.

"Would the city make a request ..." says Rice, fishing for a consolation prize now that she and Anderson have reached an impasse.

"Would the city make a statement ..." Rice begins, then pauses, visibly irked. "To be fair, the rainbow flag has never been flown at any lynchings that I'm aware of. I think it's a very separate issue and I don't like the two being compared."

"No no no. I'm just saying ..." (Mayor Anderson contacted Scene the following day, apologizing for any possible misinterpretation. He said he never intended to compare the two flags and what they stood for. He said he was uneasy about the comment and that he thought Maggie was very gracious in her response.)

"These are not two special interest groups," Rice says firmly. "We're talking about racist violence and celebration of inclusion, two very different things. However, will the city of Willoughby say that they don't want to march under a Confederate flag in a parade? That's what it comes down to for me."

"I mean you did. You did this summer. I watched it happen."

"You don't see how the two, how putting 'City of Willoughby' and 'Confederate flag' next to each other — those two symbols — puts in the minds of the people watching the parade, including people of color, that one supports the other?"

"I think a couple of thousand people watched that parade, Maggie, and you're the only person that's asked me about it."