How Smucker's lost its battle for crustless-sandwich supremacy. 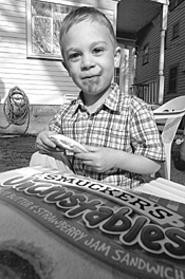 Walter Novak
Experts claimed in court that Uncrustables are much more than just a sandwich.
Regan Quaal remembers well the day in winter of 2000 when he opened his mail to find a letter from the J.M. Smucker Company. It demanded that he immediately stop peddling his unique peanut-butter and jelly sandwiches -- the ones with the crusts cut off. Smucker's, the letter read, already owned the U.S. patent for crustless sandwiches.

In other words: Back off, little sandwich maker.

Quaal, owner of a small Michigan food-manufacturing company, was dumbfounded. "I couldn't believe someone had gotten a patent on a peanut-butter sandwich," he remembers thinking.

For 14 years, Quaal had been selling crustless, meat-filled pastries called "pasties." Only recently had he and his partner branched into nonmeat fillings. Peanut butter, they thought, would make an exciting new filler item. They had just agreed to supply a few schools with the prepackaged sandwiches when the Smucker's letter arrived. Reneging on the deal, he knew, would be a blow to their business.

So Quaal braced for a fight, hiring prominent Michigan patent attorney Kevin Heinl to lead the way. After reading Smucker's patent for crustless sandwiches and researching sandwich history, Heinl became convinced that it never should have been approved.

"We consider any charge of infringement to be a serious matter -- even if it does relate to peanut-butter and jelly sandwiches," says the lawyer. But "I didn't really believe that a new invention had been made."

Technically, Orrville-based Smucker's, the top jam maker in North America, does not claim to have created crustless PB&J. It's just that, until recent years, no one had ever tried to patent such a sandwich.

That changed in the mid-'90s, when a pair of midwestern dads sought a crustless PB&J patent after their wives jokingly suggested they go into business. "There is a need for a convenient sandwich which does not have an outer crust and which is not prone to waste of the edible outer crust portions," Len Kretchman and David Geske explained in their application. In 1999, they earned their patent. Soon after, Smucker's swooped in, buying the rights for an undisclosed amount.

By 2000, Smucker's Uncrustables hit store shelves across the country. They sold 50 million of them in the first year alone.

Around the same time, Smucker's fired off cease-and-desist letters to Quaal and dozens of other companies selling similarly crust-free sandwiches. Quaal sued to have Smucker's patent declared invalid, on the grounds that crustless sandwiches are not unique. Smucker's, in turn, sued for patent infringement. The U.S. Patent and Trademark Office is reexamining the patent; a decision is expected by sometime in 2006. (Smucker's declined comment for this story.)

In the meantime, Smucker's applied for additional Uncrustables patents -- most notably for the means of making and packaging the sandwiches. If successful, the patents could have granted the jam maker unilateral control of the crustless-sandwich world.

In one 2003 application, Smucker's claimed that its method of sealing sandwiches -- allegedly a unique crimping process that prevents jelly from seeping onto, and thus sogging, the bread -- merited a patent of its own. (Note to renegade crustless-sandwich makers: Smucker's "trade secret" for preventing sogginess requires the bread to be slathered on both undersides with peanut butter before applying jam between the layers, according to the patent application.)

To illustrate the point, Smucker's lawyers submitted photographs and affidavits "proving" that there was no other means of creating a crustless sandwich as perfect -- as sog-free -- as their own. In one exhibit, a sandwich-crimping expert hired by Smucker's claimed that when he tried using the Tartmaster pastry device to cut and seal the sandwich, "It wouldn't slice the bread properly."

Patent judges responded by rolling their eyes. "Those experiments were conducted without pushing down on the outer ring of the 'Tartmaster,' an action which would result in the clean cutting of the bread," the Board of Patent Appeals stated in its December 2003 ruling.

Similar experiments with the Pampered Chef-brand Cut-N-Seal device led to all sorts of "rupturing problems," Smucker's lawyers insisted. Patent examiners, observing photographs of the sandwich disasters, accused the attorney of slathering on too much jam.

In the same application, Smucker's argued that its process of bagging the sandwiches in air-tight packages immediately after prepping further distanced Uncrustables from ordinary crustless PB&J. Patent examiners countered that airtight packaging is an "obvious technique for wrapping the sandwich."

The patent was denied. Undeterred, Smucker's got an April 6 hearing before the U.S. Court of Appeals for the Federal Circuit in Washington, D.C. This, too, did not go particularly well.

Appellate Judge Arthur Gajarsa cited his wife's habit of smooshing together the upper and lower bread slices when preparing their children's peanut-butter and jelly sandwiches.

"I'm afraid she might be infringing on your patent," Gajarsa told the Smucker's legal team.

The verdict to reject the appeal was made in two days -- one of the quickest decisions in the court's history, patent lawyers say.

Smucker's responded to the defeat with only a press release:

"While disappointed with today's decision, we do not anticipate this decision will have any material impact on our short or long-term financial performance. We bought a unique idea for making an everyday item more convenient, made a significant investment in the idea and in developing the innovative manufacturing technology that makes Uncrustables so easy to use. We took the chance that PB&J lovers would buy it. They have. In fact, they love Uncrustables."

They love them by other names too. Regan Quaal says his own crustless-sandwich business is doing quite well, thank you very much.