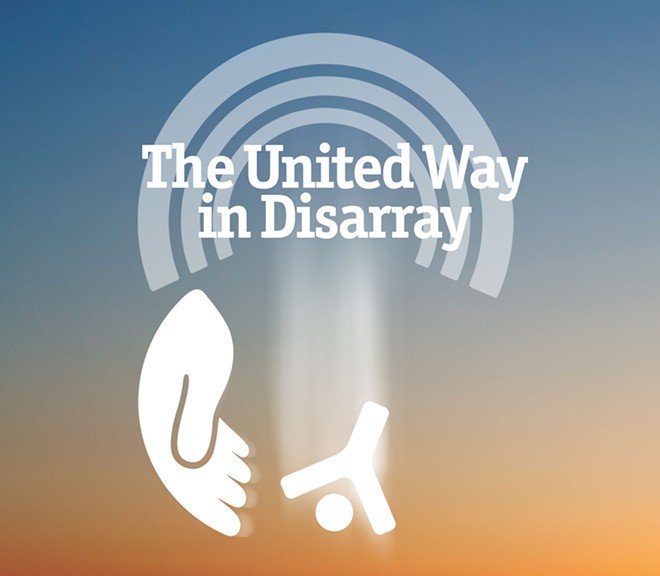 Illustration by Tom Carlson
The United Way of Summit and Medina (UWSM) is now investigating a litany of workplace concerns raised by a group of former employees in an anonymous letter sent to the organization's board of directors late last month.

The group of at least 15 former employees had drafted the letter, with a long list of examples documenting what they referred to as a toxic workplace, after the emergence of misconduct allegations at the Akron Art Museum and suspicion that the institution had used the pandemic as an excuse to fire those who'd lodged complaints.

In the aftermath of the museum scandal, according to the letter, USWM had "positioned themselves as a leader around Diversity, Equity and Inclusion." Former employees said what was alleged to have occurred at the museum was rivaled by their experiences at United Way.

A draft of the letter was inadvertently sent to a board member in late July, and UWSM CEO Jim Mullen promptly engaged the services of a third-party investigator, Sindy Warren. Mullen and Board Chairman Mark Krohn also alerted area media outlets that they had done so, communicating that they were taking the allegations in the letter seriously.

The former employees then sent a final version of the letter to the full Board of Directors. It was recently shared with Scene. In introductory comments, the former employees said they never intended to share their letter with the media, but that they worried Mullen was now controlling the narrative, and that the narrative was focused primarily on saving face.

"While this is not the path we had wanted to take, it is the path we are on so we share this letter now with you, the Board," it read. "While we understand the discomfort that might arise when reading through this letter, we hope the Board can look past this discomfort and focus on the systemic issues we are trying to shed light on."

Those systemic issues can be boiled down to the following: a workplace culture "wrought with nepotism, sexual harassment, and racism." In an itemized list, with quoted material from former employees, the letter describes in detail a culture that employees say led to extraordinarily high rates of turnover. By their count, from March 2016 to April 2018, 25 people resigned, tried to resign or were fired, equaling a turnover rate of 71 percent.

"On the fundraising team alone, there was a 120 percent turnover rate from March 2016 to March 2018," it read. High rates of turnover, especially on the fundraising team, were also hallmarks of a toxic workplace culture at the United Way of Greater Cleveland, which Scene exposed earlier in 2020.

Employees say they feared retaliation if they took concerns to HR, that they were constantly on guard against the mood swings of CEO Mullen, and that they watched, aghast, as those in senior leadership positions, including former VP of Community Impact Seth Kujat, made racist or inappropriate comments with impunity.

"Prior to the 2016 Kaboom playground event, staff needed to remove a fallen tree from a basketball court," read one example. "Seth Kujat was straddling the base of the tree and making comments such as 'Move you Nepali whore, move you bitch. I’m going to ride you.' This was said in front of senior staff and the CEO, who only laughed at the comments and made no attempt to stop them. Several staff walked away because the comments made them so uncomfortable."

In another example, Kujat and other senior leaders allegedly made comments in front of Black employees paraphrased as, “don’t put your hood up or you might get shot.” Another employee took exception to Kujat's suggestion of "terrorist week" for the theme of a staff event.

The letter later noted that Kujat recently left UWSM, but stressed that he was not the only purveyor of the toxic workplace culture.

"His departure should not be used as the scapegoat when greater change is needed for the benefit of our community," the letter read. "The fact that he was supported by the CEO despite numerous complaints and staff departures over the past four years is a testament to the leadership style that has prevailed since the start of the CEO’s tenure in 2015, enabling and perpetuating these severe issues."

Jokes of a sexual nature, and other off-color, politically charged comments were described as a regular feature of office life. One top administrator was said to have referred to United Way's clients as "those people," and made disparaging comments about the parents of the children the organization served. Kujat and others reportedly maintained a view of poverty as the result of individual bad life choices.

The letter also noted "rampant nepotism" and advised that the board address the issue separately because it was alleged to run so deeply throughout the organization. It noted six positions at the Director or VP level that employees alleged were occupied by the CEO's personal friends.

The anonymous senders said that they did not intend to seek legal action. "This letter is about values, ethics, and what is best for the organization and larger community," the letter read. It did, however, offer suggestions for concrete steps they'd like to see implemented, including staff representation on the board of directors, racial diversity in leadership and racial justice training for current senior personnel. Finally, they asked that UWSM cede its leadership role on Diversity Equity and Inclusion work in the community.

United Way should "focus internally on repairing the damage to better serve clients and staff before trying to serve the community at large."

Board Chairman Mark Krohn told the Medina Gazette that the allegations in the letter were very serious and that all employees had been notified.

"We’re going to get the facts, we’re going to find out what happened and we’re going to make decisions based on those findings and recommendations," he said. "If we need to improve, we will. We care about the health of our work environment, our team and our board."