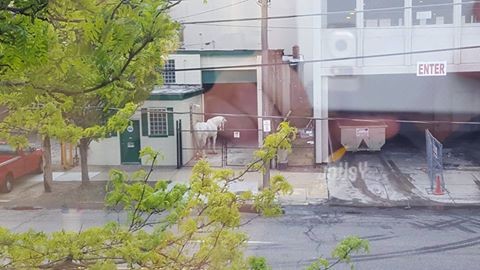 Facebook
Hands were wrung and days were ruined, Wednesday, after a photo posted on Facebook Tuesday alleged to depict an act of animal cruelty.

“Don't ever ride that horse and carriage that hangs out down by E 4th in Cleveland,” wrote Cody Cooper, a local stand-up comic from Lakewood, in a post accompanying his picture. “They keep the horse chained up in an old auto body shop downtown.”

Cooper shared a link to a Change.org petition asking Mayor Frank Jackson to ban horse-drawn carriages in the city of Cleveland. That petition was started three months ago and has far surpassed a similar petition started in 2014 after a carriage horse slipped on icy construction plates downtown.

The petition has garnered more than 9,000 digital signatures, in large part due to publicity generated by Cooper’s post, which itself has been shared nearly 5,000 times.

But Cooper’s outrage, echoed and amplified by online commenters, was perhaps not proportionate to the alleged offense. Both WKYC and WEWS confronted the owner of Shamrock Carriages, Pete Leneghan, at the company’s stables and headquarters on St. Clair, about the photo. Leneghan told them that the horse — Lance — was kept outside no more than 15 minutes as his stall was being cleaned.

“That’s a load of BS,” Leneghan said by phone, of the Facebook post. “Someone drives by and snaps a picture — there’s really nothing I can do. It’s almost so ridiculous that I can’t even let it upset me.”

Sam Allard / Scene
Cody Cooper, who works across the street from Shamrock Carriages, said on the original Facebook thread that he’d seen what he assumed was the same horse outside regularly, and for long stretches. (He wasn’t just “driving by.”)

But Leneghan, who also owns Stone Mad Irish Pub in Detroit-Shoreway and the Treehouse in Tremont, brushed off the accusations of mistreatment. He claimed the only reason he was in the business was because he loved horses. He said he’s in the process of buying the adjacent lot on St. Clair to use as a “grazing area,” and that two of his three horses spend the winter on a friend’s farm in Lodi. His third horse, a Clydesdale, spends summers there and returns for fall/winter carriage rides.

Cooper’s Facebook language — “they keep the horse chained up in an old auto body shop downtown” — was imprecise, then, in an incendiary way.

In the photo, Lance was tied (by rope, not by chain) to a hook on the stone wall outside the large green garage-style door. Inside is not an old auto body shop, but a 5,000-square-foot customized stables. Leneghan claimed his horses get “the best feed, the best hay.”

Gia Campola, who started the group PEACE in Cleveland (Prevent the Exploitation and Abuse of Carriage Equine in Cleveland), and who also started the original Change.org petition, told Scene that though she couldn’t speak with confidence about Leneghan’s treatment of his animals, the idea of horses being used as commodities in urban settings is not only wrong, it’s dangerous.

“They get spooked easily, they jump curbs,” Campola said, citing a Carl Monday investigation after a Shamrock carriage horse ran wild and damaged 11 cars in downtown Cleveland. “This is a safety issue.”

Moreover, Campola said that it’s easy for her to see that the horses working in the carriage industry are severely depressed.

Sam Allard / Scene
The adjacent lot, soon to be grazing grounds, according to Leneghan.
“You know at Sea World, when the killer whales’ dorsal fins curl to the side?” She said. “That’s a sign of severe depression. Well, when a horse hangs its head down, that’s a sign of depression. And they all do it downtown. You think of all the potholes and pavement. No pun intended, but it’s a hard life for them.”

Hard though it may be, the life is sanctioned by the city of Cleveland’s department of licensing and assessments. Leneghan, like other carriage operators, must have his individual carriage vehicles insured, and must renew his operator's license every year when it expires on March 31. Leneghan said his horses get regular visits from the vet and inspections from Cleveland’s Mounted Police Unit, one of the oldest mounted units in the country. The city approves specific routes for carriage tours ahead of time.

“We’re really regulated,” Leneghan told Scene. “We don’t go out until after 6 p.m. on weekdays, to avoid the traffic, and on Indians’ games, we’ve got to stick to certain streets.”

Leneghan said that he suspects he won’t even attempt to bring the horses out during the RNC.

“When there’s a big event, we don’t come out,” he said. “We’re real conscious of what’s happening.”

Still, Cody Cooper’s post has generated what may or may not be a momentary clamoring for animal rights. In New York City, mayor Bill de Blasio has attempted to ban the carriage horse industry, but it was considered a “foolish campaign promise” by a little local rag called the New York Times. The efforts were derailed due to staunch opposition from the union of carriage drivers, and by onlookers who noted that the anticarriage crusade was being pushed by horse-loving de Blasio financiers who moonlit as real estate developers, and were keen on developing the area then occupied by the stables.

Cody Cooper, for his part, told Scene that he was pleased his post “sparked some discussion” on the issue, but that he wasn’t fond of causing an uproar.

“I guess I don't like people jumping to conclusions based on emotion, and I propagated just that,” he said. “In the end, it isn't a debate about whether or not the horse is cared for; it’s about whether the horse should be held in an urban environment and paraded around downtown for the enjoyment of people. I don't agree with that facet of it.”