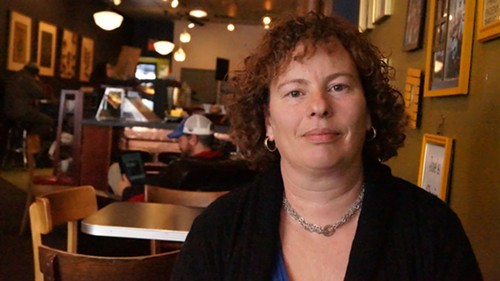 This evening, the Happy Dog kicks off the second of two new monthly series in conjunction with beltmag.com. Belt Out!, a series devoted to the writing of Belt Magazine and other unaffiliated rust belt publications, will be held in the Underdog the third Wednesday of the month at 7:30 p.m.

(Scene preemptively acknowledges that today is the fourth Wednesday in January).

Anne Trubek, Belt Mag’s founder and inveterate multi-tasker, is thrilled with the Happy Dog partnership. She says she’s invested much of her career in finding a home for writing and discourse related to the liberal arts and humanities outside of traditional academic venues. Both tonight’s reading and the other new monthly series — “Hot Dog University” a casual liberal arts lecture thing — are natural extensions of the work Trubek’s been doing for years.

Sean Watterson, one of the Happy Dog's owners, says that Belt Out! replaces the former Write to Assemble series.

"Frank Lewis had to wind up Ohio City Writers earlier this fall, so we lost OCW as a presenter."

BeltMag.com is now the new kid on the block in Cleveland’s digital media scene and has emerged as a unique outlet for researched essays and opinion pieces, most of which have a bearing on local news stories but often aren’t tied to hard deadlines. The online arm of Rust Belt Chic Press, which itself blew up due to its Rust Belt Chic Cleveland Anthology, has been publishing for six months and Trubek has been pleased with the product thus far.

“Our goal is to ensure quality over quantity,” says Trubek. “So we’re okay if we miss a big story and if we don’t have something up for a couple days. That doesn’t mean we won’t cover news stories. We have a big piece coming up on the Burke Airport that will contain things — I think — that no one has seen before. We are not averse to doing things like that. It really has to do with whether or not we can get the writers of the caliber that can pull off something like that. It’s not easy to do a long, investigative, narrative piece, but we’re definitely interested in it. What we’re not interested in is keeping up with everything.”

Trubek says that Belt Mag is simply too small to realistically be a player in the daily — or hourly — news marketplace. Plus, in Trubek’s own words, “We don’t care about page views,” so the site is not beholden to stratospheric digital readership benchmarks.

As an entity that remains almost 100-percent funded by user memberships, Belt Mag’s key stakeholders have been and will continue to be readers and writers.

“We pay writers $500 for long form pieces, which is very good,” Trubek says. “It’s something we committed to at the beginning and we’re sticking with it. We may need to cut some things down the line, but that is going to be the last one.”