We Were the Champions of the World, It Says So Right There 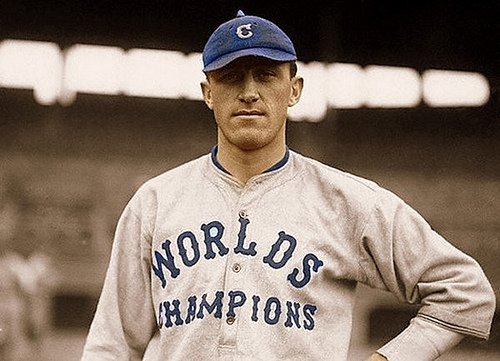 That is my favorite uniform in the history of uniforms. In 1921, the Cleveland Indians wore "Worlds Champion" across their chests because they could — they won the World Series in 1920. Forget for a moment that the wording was tragically grammatically incorrect (should have been "World's Champions," with the apostrophe) and focus on the hubris it takes to wear that on the front of your jersey everyday. Everyone says the reigning champs in any sport have a target on their back, and that's speaking figuratively. This is a target on the front. (The Indians finished 94-60 in 1921, good for second in the AL behind the Yanks at 98-55.)

That being said, I wish someone would bring it back. I suggest the team who wins the World Series should get the privilege of wearing "World's Champions" the next year, kind of like a wrestler toting around the Intercontinental Championship belt in the ring.

Even if they didn't wear it everyday, it should at least be the special Sunday and holiday uniform for the following season. And once the team is officially eliminated from the playoffs or playoff contention, they should have to take off the jerseys immediately. And perhaps burn them on the field.