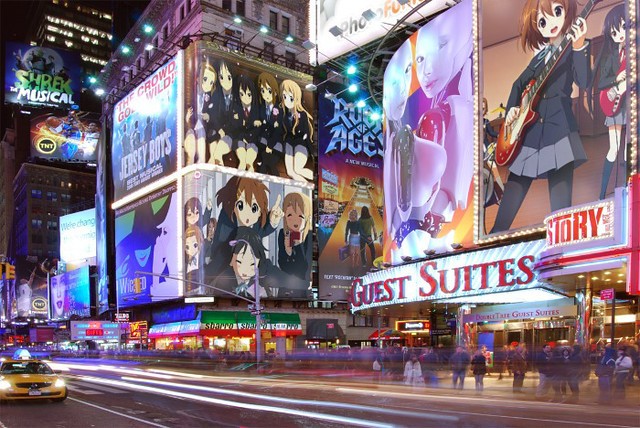 As Kristin Meyer set up her merchandise booth at the Anime NYC convention last November, she was sure she’d be exposed to the coronavirus at some point during the three-day event. “Getting that many people together in one spot, the chance that absolutely no one had COVID was zero,” she says.

Meyer was one of hundreds of artists who paid for a space to sell their art in the convention’s Artist Alley. Many signed up, despite getting a cold or the flu, bronchitis or pneumonia at previous fan conventions. “I used to get everything,” says Daifei, another artist, who asked to be referred to by their online handle. “Just from being around people.”

In the Artist Alley, attendees buy anime-inspired prints, charms, buttons and other custom-made merchandise. At an event like Anime NYC, artists can make as much as $15,000 in a weekend, says Daniela Muino, an artist who traveled from Texas with her partner to the 2021 convention. “People physically seeing your art in front of them” is great for sales, Muino says.

The greatest draw of Anime NYC for many attendees is connecting with other fans. A hobby typically considered niche takes over one of the country’s largest convention centers — the Javits Center — and drives a three-day party in and around the venue. Even in the midst of a pandemic, the 2021 event drew a record 53,000 attendees from around the United States and 30 other countries.

People were clearly drawn to get together. “Self-isolating rules are vital [in a pandemic],” says Robin Wollast, a psychology researcher at Stanford University. But “they also undermine deep-rooted needs for social bonding.” In-person events can be crucial for mental health, he says, despite the health risks they pose.

Attendees aware of those risks were not surprised when news broke in early December that the convention may have been a superspreader event; one of the first U.S. cases of COVID-19 due to the highly contagious omicron variant had been traced back to Anime NYC. The shock came later, in February, when the U.S. Centers for Disease Control and Prevention reported that, in fact, omicron had not spread widely at the convention.

Anime NYC may offer some lessons for making large events safer now and in the post-pandemic future.

What went right?
Peter McGinn, who works in health insurance, felt confident flying to New York City from his Minneapolis home for the convention. The 31-year-old knew the virus spreads easily through the air. But he was fully vaccinated and boosted, as were many of his 30 or so friends coming in from more than 10 states. The group used Anime NYC as a long weekend party; they shared accommodations and socialized at the city’s restaurants, bars and karaoke venues.

“I felt pretty comfortable based off of everything I did to protect myself, and what the people I was with did to protect themselves and everybody around us,” says McGinn, referring to his friends’ vaccination status and their masking in the venue, except when eating or drinking.

Once back in Minneapolis, McGinn didn’t feel great, but he attributed his symptoms to “normal con fatigue.” Plenty of attendees of these and similar events expect to get sick. At the American Geophysical Union’s annual meeting, for example, attendees ruefully refer to “AGU flu,” which spreads among conference-goers every year.

When one of McGinn’s convention friends tested positive for COVID-19, McGinn took a PCR test, which came back positive. A week into his 10-day quarantine, the Minnesota Department of Health called to tell McGinn that he was the first known person in his state to be infected with the omicron variant. Once the health department learned he had been to the crowded convention in New York City, McGinn spent hours helping both Minnesota’s state agency and the CDC with contact tracing.

Once word got out that McGinn had omicron and that several of his convention-going friends had also tested positive, news reports suggested he may have been patient zero for a potential superspreader event at the anime convention.

This news was reminiscent of the February 2020 biotech conference in Boston that had become one of the first superspreader events in the United States. Infections at that conference may have been linked to more than 300,000 cases, researchers reported in Science in December 2020.

In January, McGinn said he hoped the investigation into Anime NYC would push back against the perception that this convention had been a superspreader. “It’s overwhelmingly likely that where I caught COVID was outside of the event at dinner or karaoke,” he says. While at the convention center, he and his friends constantly wore masks.

McGinn felt vindicated when the results of the investigation were published as a pair of reports in the Feb. 18 Morbidity and Mortality Weekly Report. One study focused on McGinn and his friend group, and the other presented a big-picture view of COVID-19 at the convention. The researchers searched state and local health databases for test results from about 34,500 out of the 53,000 convention attendees whose contact information was available from the event organizers. They identified 119 cases among 4,560 people who got tested. Of those 119 cases, 16 were in McGinn’s friend group — and the only cases confirmed as omicron were among those 16.

The CDC characterizes a superspreader event as one infectious person giving the corona­virus to many others at a rate higher than average transmission. This didn’t occur at Anime NYC, the investigation found, because the rate of positive tests among convention attendees was close to the overall rate in New York City two weeks after the convention: about 3 percent.

“It’s nice to confirm that the event wasn’t a spreader event,” McGinn said after receiving news of the reports. “It makes me more comfortable in the future going to these types of events as long as mask and vax requirements are in place.”

Layers of protection
The CDC reports attribute this convention’s success to layers of safety measures put in place, including masks, vaccine checks and good ventilation.

“Everyone was always wearing their masks … when speaking to me or walking past my table,” Meyer says. She notes, however, that some costumed attendees took their masks off for photo shoots. And the Artist Alley was also located near the food court, where attendees took off their masks to eat.

Muino was impressed by the safety behaviors she saw at the convention in comparison with her home state of Texas. Still, the spacing of tables in Artist Alley “felt way too close together” for social distancing, she recalls. During busy periods, the area became incredibly crowded.

Attendees needed to show proof that they’d received at least one vaccine dose, following the city’s regulations at the time. Among 3,845 attendees whose test results and vaccination status were both available from local health departments, 3.4 percent were partially vaccinated, 84.5 percent were fully vaccinated and 12.1 percent had received a booster dose. Studies have shown that partial vaccination offers significantly less protection against COVID-19 than full vaccination.

However, Anime NYC organizers had too few staff checking proof of vaccination outside the venue, leading to long lines and crowding outside. Some attendees waited outside up to four hours on the first day of the convention.

The Javits Center itself took COVID-19 seriously, partly due to its roles during the pandemic as a field hospital and then a mass vaccination site. Newly installed hospital-grade air filters throughout the building may have helped prevent transmission.

“All the employees at the Javits Center had to go through training,” says Gavin Macgregor-Skinner, senior director of the Global Biorisk Advisory Council, part of the worldwide cleaning industry association that certifies organizations, including the Javits Center, on preparedness for biological threats. This training included cleaning protocols and how to manage traffic through the building.

This venue also worked with event organizers, including the company that runs Anime NYC, to ensure they followed safety protocols. The Javits Center’s attitude was, “if you come into our house, you follow our rules,” Macgregor-Skinner says.

The CDC investigation results do not mention, however, that Anime NYC was also very lucky with its timing. When this event took place, omicron hadn’t yet gotten a foothold in Manhattan. The city’s first wastewater samples containing omicron were collected on November 21, the final day of the event.

If the same event had happened two weeks later — when omicron was raging through the city — organizers would have needed more safety measures, such as a stricter vaccination requirement and rapid testing, to achieve the same low transmission, says Ayman El-Mohandes, an epidemiologist and dean of the school of public health at the City University of New York.

Heroes wear face masks
A successful COVID-19–safe event requires layers of protections that align with the community that the event is serving, says Mark Billik, founder of BeCore, a marketing agency that pivoted to organizing COVID-19–safe events during the pandemic. Billik recommends that his clients tailor their COVID-19 protocols for their events and he offered suggestions for future fan conventions (see Page 25).

Advance communication may be particularly successful when it’s tailored to a community and drives “enthusiasm about creating a safe environment,” El-Mohandes says. For instance, the next Anime NYC could provide masks with the faces of famous anime characters or post signs that show these characters encouraging distancing and frequent handwashing.

Using anime characters to promote safe behaviors is an example of classical conditioning, says Wollast, the Stanford psychology researcher. In classical conditioning, people learn to associate a particular stimulus (like wearing a face mask) with an unrelated stimulus (a favorite character) to drive a particular behavior. “My heroes are wearing face masks so I should wear one too,” Wollast says.

Safety beyond COVID-19
Along with avoiding COVID-19, Anime NYC attendees who spoke to Science News noted that they also avoided other respiratory illnesses. “Less people have been sick that I’ve heard of this year, than any other convention that I’ve ever been to,” Daifei says.

Maybe a cold or flu doesn’t have to be a necessary evil of attending conventions or similar events.

COVID-19 safety measures probably contributed to an unusually low number of flu cases in the 2020–21 season, according to the CDC. Leaders in the events industry are considering safety measures that build on lessons from COVID-19 — such as new technologies to improve ventilation and cleaning protocols — to reduce future outbreaks of flu and other infectious diseases, according to the Global Biorisk Advisory Council.

Some Anime NYC attendees hope to see continued handwashing, mask use and policies that encourage people to stay home when not feeling well, long after this pandemic recedes. All these practices are “very applicable to non-COVID respiratory infections,” El-Mohandes says. Such safety practices may also make large events more inclusive for immunocompromised people, many of whom already had to avoid crowds for their potential to spread infection before the pandemic.

“I feel like this is something that we can actually keep doing,” says Nicole Tan, an artist who shared a booth with Daifei at Anime NYC. The pandemic inspired a widespread realization that “we could have prevented a lot of illness if we just put our minds to it.”