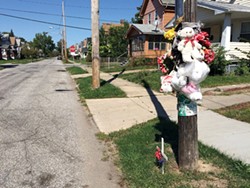 Cleveland's year-to-date homicide total stands at 128, according to the Cleveland Police.

With two Holiday weekends remaining, that's already seven more than last year and represents the highest total since 2007, when there were 134 homicides in the calendar year.

After homicides fell from 98 in 2012 to 88 in 2013, there has been a steady upward trend. Here are the numbers from the past decade, as reported last year by Cleveland.com: