City of Green Donates $10,000 in Legal Fight Against Nexus Pipeline 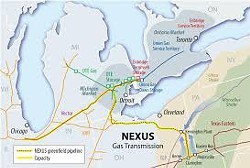 The ongoing struggle to prevent the approval and construction of a natural gas pipeline in Summit and Medina counties — and elsewhere in the state — has brought in funds from the city of Green. City Council last week agreed to donate $10,000 to the Coalition to Reroute Nexus (CoRN), which intends to file a complaint in federal court against the pipeline’s owners.

Nexus, of course, has not been approved by the Federal Energy Regulatory Commission. For more than a month now, FERC has been without a quorum of commissioners and unable to approve any projects. Houston-based Spectra Energy has continued to insist that they’ll begin construction on Nexus by this fall.

With the fate of Nexus still rather nebulous, CoRN legal action would get out in front of any future certifications from FERC, which will eventually see President Donald Trump appoint at least one new commissioner. Observers say the FERC quorum will likely be re-established by May.

CoRN and its legal counsel are looking specifically to file a Civil Action for the Deprivation of Rights against Nexus and FERC to overturn the final environmental impact statement as “arbitrary, capricious and inadequate,” CoRN co-founder Paul Gierosky tells Scene. “We will seek an injunction to stop FERC from issuing a certificate.”

Federal courts are saddled with the duty to examine FERC environmental impact statements. The complaint will also request that the court determine whether civil rights, like due process rights and property rights under eminent domain, are being deprived under the Nexus project.

“This window of opportunity for a declaratory judgment action [on Nexus’ use of eminent domain under the Natural Gas Act], however, may close should new commissioners be appointed and the certificate be issued,” Gierosky explains.

Summit County will match any funding from the city of Green in this effort — up to $25,000.