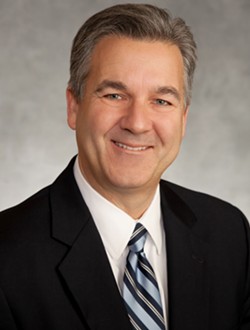 Earlier this week, Cleveland.com's Cory Shaffer reported that Cuyahoga County Court of Common Pleas Judge David Matia, a known and prolific critic of Issue 1, was campaigning against the ballot measure in front of prospective jury pools.

While Matia maintained that his behavior was in keeping with judicial rules, based on a 2002 advisory opinion by an Ohio Supreme Court board, others questioned the ethics of politicking before a "captive audience."

One legal expert told Cleveland.com that Matia was "abusing the prestige" of his office.

It's no secret where Matia stands on the proposed constitutional amendment that would reduce penalties for drug offenders and allow incarcerated people to work toward sentence reductions by participating in rehabilitative and educational programming. Matia represented the "Vote NO" side in a City Club debate on Oct. 8, and his Facebook page has become a clearinghouse for anti-Issue-1 endorsements and propaganda.

"Out-of-state money is Funding this entire issue," reads a post that Matia shared on Oct. 17. "Why? This amendment to our Ohio Constitution would make Ohio a safe haven for major drug traffickers."

On Oct. 18, in a message to voters posted on his wall, Matia said, "it is not an over-exaggeration to claim that people will die if Issue 1 passes." When Amy Hanauer (from the Pro-Issue-1 Policy Matters Ohio) responded that "many, many more" people would die if the measure doesn't pass, Matia asked how much money Policy Matters had received "from the titans backing Issue 1." Hanauer responded, there and in an additional post, that Policy Matters receives no funding from the titans to which he referred. Its funding in this area comes from the local George Gund Foundation.*

Matia's opposition is rooted foremost in self-interest. More than anything, he doesn't want to lose the ability to hold low-level drug offenders accountable by wielding the threat of jail time. He also wants to preserve Cuyahoga County's drug court, which graduates, by Matia's estimate, about 115 people per year and is currently available only to those with felonies. The passage of Issue 1, in his view, would "destroy what's working." (The common rejoinder is that it's difficult to look at Ohio's bloated prison population and stratospheric drug overdose numbers as outcomes of a system that's working.)

But Matia isn't the only judge campaigning hard against Issue 1. Indeed, Ohio Supreme Court Justice Maureen O'Connor penned the op-ed that appeared in Sunday's Plain Dealer representing the Vote No side.

"Issue 1 would decimate [supervised medication overseen by drug courts]," she wrote. "As a constitutional amendment, Issue 1 would forbid judges from using the proven incentive of jail that encourages addicts to participate in treatment."

Singing the praises of state drug courts is a prominent talking point, but denigrating outside funders, especially billionaire George Soros, has been a visible tactic as well, as in Matia's questioning of Amy Hanauer.

According to a prospective juror in Cuyahoga County last week, judge Kathleen Sutula spoke to the pool — judges deliver welcoming remarks to jury pools on a rotating schedule — and cited Soros as a reason to vote No.

Nina McLellan was in the room with Sutula as well. The Shaker Heights resident told Scene by phone that it was the second time she'd been called to serve on jury duty and was familiar with the welcoming spiel that judges give to prospective jurors. She said she was surprised and uncomfortable by Sutula's Issue 1 speech.

"First she talked a bit about herself," McLellan told Scene. "She's up for election. But then she said that [Justice Maureen O'Connor] had given them permission to speak against Issue 1, and she was vehemently opposed."

McLellan says she remembers the tone of Sutula's remarks more than the content, but that Sutula spoke about fentanyl, "that possession of enough fentanyl to kill 70 people would only be a misdemeanor," and that judges would lose their discretion in drug cases.

Because she was not selected for a jury on Monday, McLellan returned on Wednesday. On that day, Judge Cassandra Collier-Williams delivered the welcome speech to jurors. Per McLellan, Collier-Williams did not bring up Issue 1, but was asked about it because people had been distributing flyers outside the justice center. Collier-Williams said she "wasn't really comfortable" discussing.

Scene spoke with another prospective juror who was summoned for jury duty last week. When he arrived at the Justice Center Monday, it was Matia delivering the welcome speech.

"It was weird," said Ben Senter, in a phone interview. "He thanked us for doing this, said no one likes jury duty, and than said, 'Today I wanna talk to you about Issue 1.' He proceeded to talk for 20-30 minutes about how it would completely gut drug court and make streets less safe. Everyone was kind of looking at each other."

This was Senter's first time serving on jury duty. He said he texted his wife, a lawyer, to ask whether or not this sort of advocacy was legal. His wife told him that it's "definitely not the most ethical." But Matia defended his actions, saying he was allowed to speak out because it directly affected him and the criminal justice system.

When Senter returned on Wednesday, it was Matia delivering the spiel once again. And once again, he delivered his anti-Issue-1 screed, complete with visual aids.

"Every single negative talking point I've seen or read about Issue 1, he was spouting off," Senter said. "A lot of the things he was saying were, I thought, disputable. He definitely talked about fentanyl."

The fentanyl talking points are widespread. Republican gubernatorial candidate Mike DeWine said in a September radio interview that someone caught with 1,000 pounds of fentanyl would only be charged with a misdemeanor if Issue 1 were to pass. Like local judges and other opponents, DeWine has promoted the narrative that Ohio would become a haven for drug traffickers keen to avoid prison time.

Here's a fact-check from the Dayton Daily News:

Ohio’s criminal code includes provisions under which those in possession of a “bulk amount” of illicit drugs are charged with higher level felonies, and sent to prison, even if there’s not enough evidence to charge them with trafficking. Those laws would not change under Issue 1.

The criminal code lumps fentanyl in with all over federally classified Schedule II drugs. The bulk amount for that category is defined as equal to 20 grams or five times the maximum daily dose as “specified in a standard pharmaceutical reference manual.”

In the case of fentanyl, five times the maximum daily dose is far less than 20 grams. Fentanyl dosing is complicated because it comes in different forms, but it’s always expressed in micrograms, not grams. When converted to grams, the bulk amount based on the largest maximum daily dose listed in the Prescribers’ Digital Reference equals about .048 grams.

Anyone possessing that amount of fentanyl — which is more than 400 times less than 20 grams — could be charged with a third-degree felony, and thus not impacted by the Issue 1 reforms. Under Issue 1, fourth- and fifth-degree felonies would be converted to misdemeanors.


Judges all across the state are nevertheless spouting these talking points. While enlightened editorial boards are insisting that voters are too stupid to vote on a constitutional amendment that ought to be handled by wise and emotionally detached state legislators, judges are prophesying deaths of addicts forsaken by drug court, clutching their pearls over a prophesied inundation of fentanyl dealers, and name-dropping George Soros — even Democrats are doing this! — to rile up Republican voters who have been taught to associate him with Satan.

Judge Kathleen Sutula is a Republican, but the anti-Soros rhetoric has been embraced with equal fervor by Democratic judges. It's clearly a talking point. At Thursday night's meeting of the Lakewood Democratic Club, Lakewood municipal court judge Patrick Carroll spoke out against Issue 1, and cited George Soros as a reason to oppose the issue.

So just fyi, my opinion of the @VoteNoOHIssue1 messengers continues to fall.

At tonight's 10/25/18 Lakewood Democratic Club meeting, the "no" speaker—not making this up—attacked the @YesOnOneOH campaign as work of "outside money" from George Soros among others.@SceneSallard


Democratic judges trash-talking George Soros and taking up the mantle of law-and-order Republicans is already dumbfounding. But the bigger issue remains the propriety of advocating against Issue 1 inside the courtroom.

In Mansfield, Ohio, when a local judge held a "forum" featuring only Issue 1 opponents inside his courtroom, a resident said she felt uncomfortable with the arrangement.

"I'm just concerned that we're in this environment," resident Carol Liles said, in a report from the Mansfield News Journal. She added that she would have preferred if the event were held at a public library instead of the judge's courtroom. "It brings up the impartiality of the courts... This is not a level playing field, in my opinion."

There are judges who support Issue 1, however. Judge Michael Nelson, of the Cleveland Municipal Court, has appeared in a radio spot for the Pro-Issue-1 side, for example. In a statement provided to Scene, he said that he supports the issue "because 14 Ohioans a day are dying from overdoses, and the status quo isn’t working. We are incarcerating far too many non-violent offenders, including a disproportionate number of minorities." And while Nelson said he supports his colleagues' right to speak out in opposition, he doesn't think every venue is appropriate.

"I don’t have a problem with judges speaking out, but I don’t think judges should be dictating their views to a captive audiences of jurors or holding so-called town halls in their courtrooms," he said.


*This story has been updated with information about Policy Matters Ohio and its funding sources.