City of Cleveland Won't Have Curbside Recycling Solution Until Sometime Next Year; Here's How to Recycle When the City Doesn't 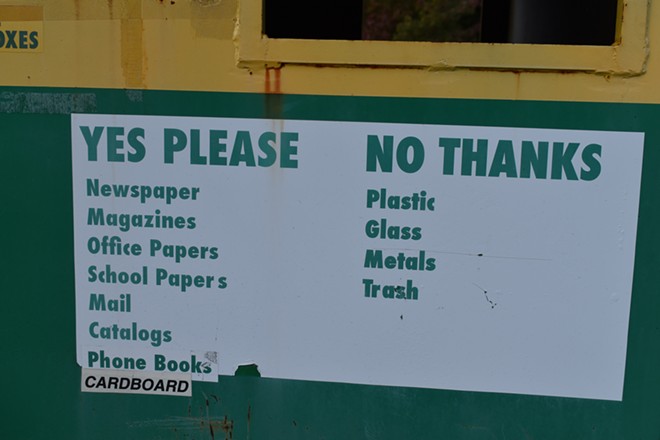 Curbside recycling is the only kind of recycling many of us have ever used, and a critical part of the “Reduce, Reuse, Recycle” mantra. But more than six months after the City of Cleveland admitted it’s dumping recyclables, and with no change in sight, it’s time to look for alternatives.

Fortunately, there are plenty of places in Cleveland where for-profit companies and non-profit organizations will take certain kinds of recyclables off your hands. Armed with Cuyahoga County’s recycling website and an embarrassing number of empty beer cans, I set out to explore them.

My beer cans and I went to Aaromet Metal Recycling, a for-profit scrap facility between some empty lots on W. 63rd St., where facility manager Bobby Lester walked me through the process.

Ferrous metals – mainly steel – can be dropped off by truck around the back of the giant shed, with the mounds of crumpled cars and old ovens. Non-ferrous metals, including soda and beer cans, get dropped off inside. If you’re not sure, Lester said, see if a magnet sticks to it. If it’s magnetic, it’s ferrous.

Lester said he’s required by law to get an ID from and run a background check on anyone who drops off scrap metal – presumably to deter people like the one who used an electric saw to swipe my car’s catalytic converter a few months ago. However, there’s an exception for beverage cans.

He said food and beverage cans don’t have to be washed. “We prefer [clean]. It makes it nice,” he said, but they’ll accept them grungy.

Lester set my box of empties down on a scale built into the floor, then handed me a receipt and 30 cents for a few dozen cans.

“We normally get people in and out in less than five minutes,” he added.

There are for-profit scrap yards happy to take metal recyclables scattered around Cleveland. If you’d prefer not to interact with anyone while dropping off your cans, select fire stations throughout the city collect them for Aluminum Cans for Burned Children.

The organization’s website says most drop-off locations have bins with ACBC logos behind the firehouse. I couldn’t find a bin at Fire Station #23 on Madison Ave., but a firefighter lounging in front said I could just leave cans, preferably in a bag, next to the station’s dumpster, and someone from the charity would pick them up.

Click here to open a map of recycling locations in Google Maps.

Melinda Valentine from River Valley said non-profits, churches and schools can ask to host a bin. Income from the first 2,000 pounds of paper and cardboard collected per month essentially covers the expense of trucking out the paper. Above that amount, Valentine said, the hosting organizations get $3 per ton for the next 3,000 pounds of paper and cardboard, and $8 per ton over 8,000 pounds.

If a location consistently collects under 2,000 pounds a month, Valentine says the company will sometimes remove the bin, but they’re not penalizing offices or schools that may be closed because of the pandemic. The company maintains an up-to-date list of locations on its website.

Sean Walter, the company’s vice president of sales for the Midwest, says that the material goes to cardboard and packaging manufacturers in Ohio, Virginia, Kentucky, Michigan and Alabama.

“Occasionally we will send some stuff overseas over to India, but the domestic mills are the ones that get the majority of our material,” he said.

Cuyahoga County’s Solid Waste Division lists a few facilities for more niche recycling, like electronics. Heavy duty plastic six-pack rings – not the old-school film ones – can be dropped off at a few local breweries and beverage stores. But there’s nowhere residents can recycle other types of plastic, or any kind of glass.

When Cleveland admitted it was no longer recycling, Cuyahoga County Solid Waste Division Directory Diane Bickett said her department looked for facilities that would take plastic or glass from Cleveland residents. They found no takers.

“It has everything to do with the market,” she said.

According to Bickett, plastics and glass, unlike metal and paper, are only profitable to recycle in large amounts, like the quantities that come out of sorting facilities, or industrial-scale castoffs from manufacturing. In the quantities produced by a single household, it’s just not worth the cost of transporting it.

“The tricky thing is that there’s a recycling infrastructure, a system of collectors and processors and end users, and when there are gaps in that system, it makes it harder for people to recycle certain items,” she said. “Until Cleveland has this program back up and in place, options are limited, unless you have a resident or a friend that lives in another community who is willing to take their materials and recycle it through their community’s program.”

Her daughter, she noted, lives in Ohio City, and brings her recyclables to Bickett’s house for curbside recycling.

According to a city spokesperson, the contractor evaluating Cleveland’s recycling program is scheduled to have recommendations by the end of this year. The city plans to implement changes in 2021.

But Bickett encouraged residents to think beyond traditional recyclables. Food waste, she said, makes up a large percentage of residential trash, and can be recycled either through home compost or a service like Rust Belt Riders.

She also pushed the two other R’s: reduce and reuse. For example, since you can’t recycle plastic water bottles, Bickett suggested trying to use fewer.

And much of what people throw away can be used again by someone else. Non-profits will treasure your old clothes, furniture, sporting goods, eyeglasses, televisions, and other ostensible trash. Bickett pointed readers to the county’s donation directory, Pass It On: A Resource-Full Guide to Donating Usable Stuff.

The upshot is, you can still recycle in Cleveland, but it takes a little more effort these days. Valentine believes a lot of people want to go the extra mile.

“It’s amazing the amount of phone calls I get daily” from residents with questions, she said. “It’s actually quite amazing to see how many people do truly care about it.”