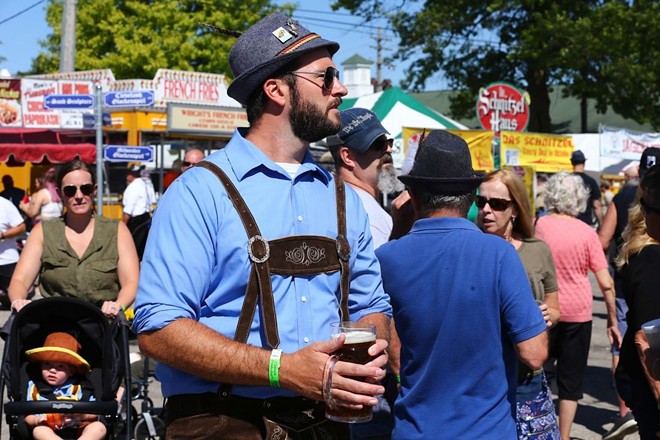 Emanuel Wallace
Cleveland Oktoberfest returns to the Cuyahoga County Fairgrounds this weekend.
Our weekly picks of the best things to do in Cleveland this weekend. Also check out our full Cleveland event calendar.

Danjo Jazz Orchestra
The nearly 20 members of Danjo Jazz Orchestra will fill Jilly's Music Room with a "timeless big band sound and the power of horns, wind instruments and a top-notch rhythm section," as it's put in a press release. The 2022 residency will afford fans the group’s blend of jazz standards and originals on a monthly basis as the band tears it up on the first Thursday of the month. The performance begins at 7 p.m. It's free.
111 N Main St., Akron, 330-576-3757, jillysmusicroom.com.

Grateful Thursday
At this monthly DJ event, Proof promises to take you back to the origins of file sharing. From 7 to 10 p.m., a DJ will play Live Grateful Dead performances captured on original bootleg cassette tapes. Drink specials will include $1 Miller Lite drafts, $3 Sierra Nevada drafts and a $7 Ramblin’ Rose cocktail. Food specials will include $3 Cuban Steam Buns and $5 Half Mile High Nachos.
2258 Professor Avenue, 216-583-0551, proofcleveland.com.

Guardians vs. Baltimore Orioles
The Baltimore Orioles, a team that has somehow kept playoff hopes alive despite playing in the highly competitive AL East, wrap up a three-game series against the Guards today at Progressive Field. First pitch is at 6:10 p.m. Check the club's website for more info.
2401 Ontario St., 216-420-4487, mlb.com/guardians.

Brad Wenzel
Comedian Brad Wenzel once started a routine on Conan by saying, "Let's get to the issues." He then proceeded to make fun of "little people" and his own outdated choice of clothing (he likes flannel shirts). Wenzel doesn't write narrative jokes; rather, he delivers a series of off-kilter one-liners in a monotone. He performs tonight at 7 at Hilarities.
2035 East Fourth St., 216-241-7425, pickwickandfrolic.com.

FRI 09/02
Dave Attell
Known as the host of Comedy Central’s Insomniac with Dave Attell and The Gong Show, Dave Attell is also a great stand up comedian, writer and actor. A New York native, he graduated from NYU in 1987 with a degree in communications. During the day, he worked crappy jobs and did standup at night. After getting national exposure courtesy of David Letterman, his career took off. The caffeinated comic has a rapid fire delivery that suggests he has trouble turning his mind off. He performs tonight at 7 and 9:30 at Hilarities, where he has shows scheduled through Sunday.
2035 East Fourth St., 216-241-7425, pickwickandfrolic.com.

Cleveland Oktoberfest
The annual Paulaner Cleveland Oktoberfest kicks off today at Cuyahoga County Fairgrounds. The fest features more than 20 different types of Oktoberfest-style beers, 15 German and European restaurants, 20 bands from all over the world, more than 100 vendors and local artisans, a daily beer stein-holding contest, the largest glockenspiel in the country, wiener dog races, a Miss Oktoberfest contest, a 5-K race and entertainment for all ages. More than 70,000 people are expected to attend the event. The festivities continue through Monday, and the festival takes place next weekend too. Consult the website for a schedule and hours of operation.
19201 East Bagley Rd., Middleburg Heights, 440- 243-0090, clevelandoktoberfest.com.

GlamGore: The Filth Ball
Expect to find performances inspired by elements of avant garde fashion, fetish and taboo acts at tonight's GlamGore, a recurring alternative and themed drag show series that takes place at the Grog Shop. Doors open at 8. Tickets cost $13 presale, $17 at the door or $25 VIP (for reserved seating close to stage, a meet and greet and a photo opportunity).
2785 Euclid Heights Blvd., Cleveland Heights, 216-321-5588, grogshop.gs.

Guardians vs. Seattle Mariners
The Seattle Mariners got off to a good start this year before fading and then roaring back into contention thanks to some of the best pitching in the major leagues. This three-game series against the Guards starts tonight at 7:10 at Progressive Field. It's Dollar Dog Night so bring an appetite.
2401 Ontario St., 216-420-4487, mlb.com/guardians.

Tony Roberts
With a wicked sense of humor, Tony Roberts has been blessed with the esteemed title of being the “comedians-comedian,” the guy other performers love to watch work. His hilariously refreshing energetic comedy style has garnered him respect in the state and abroad, creating high-demand for him in the comedy circuit. His appearances on HBO’s Def Comedy Jam, Showtime at the Apollo and BET’s Comicview no doubt attest to his talent; for an evening of laughter, be sure to catch Roberts at 7:30 and 10 tonight at the Improv, where he has shows scheduled through Sunday.
1148 Main Ave., 216-696-IMPROV, clevelandimprov.com.

The Shins
The Shins will celebrate the 21st anniversary of their classic 2001 debut album, Oh, Inverted World, by playing it in its entirety at tonight's show, part of a 21st Birthday Tour. The live show will also feature “a nightly rotation of additional fan favorites and deep cuts.” The concert begins at 7 at the Agora. Check the venue's website for more info.
5000 Euclid Ave., 216-881-2221, agoracleveland.com.

SAT 09/03
AJ & the Woods
This local rock band draws equally from classic rock and blues and from the newgrass sounds of acts like the Punch Brothers. Its latest effort, Stay Steady, nicely distills these influences. The band performs tonight at 8 at the Beachland Tavern. Orange Animal and Elisa Nichols open. Tickets cost $10 in advance, $12 at the door.
15711 Waterloo Rd., 216-383-1124, beachlandballroom.com.

Hayes Carll
On You Get It All, his eighth album, singer-songwriter Hayes Carll continues to polish his narrative approach to songwriting. The songs explore "messy relationships, motel room respites and an exasperated, hitchhiking God," as it's put in a press release. Carll performs at 8 tonight at the Kent Stage.
175 E. Main St., Kent, 330-677-5005, kentstage.org.

Cleveland Cinemas Late Shift
Monthly screenings of Late Shift titles will be held at the Cedar Lee Theatre on the first Saturday of each month at 10 p.m. The movie changes from month to month, but at each screening, there will be a special promotion that will give patrons the chance to win a prize or get a free popcorn.
2163 Lee Rd., Cleveland Heights, 440-528-0355, clevelandcinemas.com.

Hieroglyphics
Tonight at 8 at Musica in Akron, Keepers of the Art (KOTA) and international Hip-Hop Preservation Project (HHPP) present a concert featuring Hieroglyphics, Souls of Mischief, Casual, DJ Toure and Domino. Locally based KOTA haven’t produced a show since February 2020 due to COVID. The group is known to bring some of hip-hop's biggest acts to town, so it's a good sign that it has returned to promoting concerts. All tickets are $10.
51 East Market St., Akron, 330-374-1114, akronmusica.com.

The Sound of Music
Tonight and tomorrow night at 7 at Blossom, the Blossom Festival Orchestra and members of the Baldwin Wallace University Conservatory of Music’s Music Theatre Program present their production of The Sound of Music. Consult the Cleveland Orchestra website for more info.
1145 W. Steels Corners Rd., Cuyahoga Falls, 216-231-1111, clevelandorchestra.com.

Strobobean
This alt-rock/shoegaze group based out of Cincinnati performs tonight at 8 at the Happy Dog with Cleveland locals Radderall and Bleeder. The band released its debut EP, Winter, in 2019 and toured that same year to promote a single and a split tape with Cleveland's Forager. In 2020, it released another split single with Minneapolis band Scrunchies.
5801 Detroit Ave., 216-651-9474, happydogcleveland.com.

SUN 09/04
Cars in the Park
This for-charity event will take place from 11 a.m. to 4 p.m. today at Crocker Park and will exhibit an all-new and indelible collection of the most exotic, rarest and most luxurious vehicles in the world. Admission is free.
189 Crocker Park Blvd., Westlake, crockerpark.com.

House Fest 2022
This annual benefit concert will feature performances by singer-songwriter Alex Bevan, Long Time Gone, the Jah Messengers Reggae Band and J.R. Blessington. Renegade, BBC and friends, Universal Funk Mob, and Scotty D. & the Artificial Hipster. Shākē Ground, a new name on the local music scene featuring area reggae music veterans, will close out the night. Butchie B. will be the evening’s MC. The event begins at 7 p.m. at the Beachland Ballroom. A $15 donation is requested.
15711 Waterloo Rd., 216-383-1124, beachlandballroom.com.

Rock & Roll Card Show
More than 40 dealers will be on hand to sell modern, vintage, graded and raw wax cards at this event that that takes place from 10 a.m. to 3 p.m. at the Winchester. Admission is $2, but kids 16 and under are free. There will be raffles, door prizes and giveaways all show long as well as a full bar and brunch menu. Limited tables are still available.
12112 Madison Ave., Lakewood, 216-600-5338, facebook.com/TheWinchesterMusicTavern.

MON 09/05
Great Lakes 5K Bier Run
This chip-timed 5k run and 1-mile walk takes place at the Cuyahoga County Fairgrounds as part of the annual Cleveland Oktoberfest. In keeping with the Oktoberfest theme, anyone who dresses up in an authentic German costume will receive a free admission to Oktoberfest. Consult the website for more info.
19201 East Bagley Rd., Middleburg Heights, 440- 243-0090, clevelandoktoberfest.com.