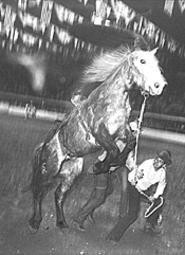 Bringing down the horse: The Cleveland Museum of Art's Trophies of the Hunt (Sunday).
Thursday, July 22

Like the Clash, Pressure Cooker is made up of white guys who respect reggae's nuances and spiritual quest, and approach it with both respect and reverence. The Boston-based group occasionally slips into SoCal ska-punk territory, speeding up riddims and tripping over some of the finer points. But when it sticks to island sounds (familiar rings of calypso and Latin also make their way into the mix) and to the traditional reggae it clearly has immersed itself in, Pressure Cooker finds relevance in what could easily be a pale imitation of genre giants. Pressure Cooker is at Wilbert's Food & Music (812 Huron Road) at 8:30 tonight. Tickets are $8; call 216-902-4663.

Nick Drake's music is slow, soft, and short. It's fitting that A Skin Too Few: The Days of Nick Drake, a 47-minute documentary about the late singer-songwriter, plays out similarly. Interviews with Drake's parents, sister, and producer flesh out this quiet, somber portrait, which never explains why the folkie (who died in 1974 at age 26 from an overdose of antidepressants) gained such a cult following after his death, or how Volkswagen jump-started interest a few years back when it used Drake's "Pink Moon" in a commercial. Still, it's a sufficient primer if you don't know what all the fuss is about. A Skin Too Few screens at 10:15 tonight and 7:35 p.m. tomorrow at the Cleveland Cinematheque, 11141 East Boulevard (In Motion: David S. Ware shows too). Admission is $8; call 216-421-7450.

Ohio bicyclists aren't required to wear helmets, but that doesn't mean riders shouldn't put one on their noggins before they hit the roads and trails (figuratively, of course). Today's Bicycle Rodeo is filled with safety tips and bike and helmet inspections. There are also eight obstacle courses, where kids can test their steering, braking, stopping, and maneuvering skills. And magicians, clowns, raffles, and free T-shirts! It happens from 9 a.m. to 3 p.m. at Tri-C Western Campus, 11000 Pleasant Valley Road in Parma. Admission is free, but registration is required. Call 216-987-5325 for more info.

More than 180 artists from across the nation will hock their wares at today's Akron Arts Expo, the silver anniversary of the annual arts-and-crafts fest. In addition to all of the paintings, glasswork, pottery, and jewelry on display and for sale, live music, food, and a kids' area will be offered. It takes place 11 a.m. to 6 p.m. today and 10 a.m. to 5 p.m. tomorrow at Hardesty Park, 1615 West Market Street in Akron. Admission is free; call 330-375-2835.

"Still life is a form that people think they know," says curator Cathleen Chaffee of Trophies of the Hunt: Capturing Nature as Art, a photography exhibit at the art museum. "This is a different way to look at still lifes." The 29 images include a mounted deer head, a crouching tiger, and an attacking bear. "It's an amazing tradition of our history," Chaffee says. "It [shows] how photographers do the same things as hunters, but they use their cameras to plan and stalk the perfect shot." It's on view at the Cleveland Museum of Art (11150 East Boulevard) through November 3. It's open 10 a.m. to 5 p.m. daily (except Monday, when it's closed). Admission is free; call 216-421-7340.

Scavenger hikes, crafts, and something called a Bug Bouncer will be at A Bug Bash 2004. Family-friendly singer-songwriter Justin Roberts will perform, a catered dinner will be served, and plenty of games and other insect-related activities will be on hand. It all happens from 5 to 8 p.m. at the Nature Center at Shaker Lakes, 2600 South Park Boulevard in Shaker Heights. Tickets, which must be purchased in advance, are $25, $8 for kids (children under 2 get in free); call 216-321-5935.

Cleveland Then and Now: A Photographic Study chronicles the similarities and differences in several local sites over the years, through photo series. A downtown block from, say, the 1920s is paired with a contemporary shot of the very same neighborhood. The result is an absorbing exploration of renovation and stagnation. It's on view through September 12 at the Western Reserve Historical Society, 10825 East Boulevard. It's open from 10 a.m. to 5 p.m. Monday through Saturday and noon to 5 p.m. Sunday. Admission is $7.50, $5 for kids; call 216-721-5722.

Shane Tanner, who plays villain Bill Sikes in the touring production of Oliver! (which opens tonight), says it's a gloomier, grislier version of the Dickensian musical that audiences will see onstage. "It certainly tells the story in a darker manner than it's been presented before," he says. "The darker elements are heightened. It's about social ills, injustice, and child exploitation." Still, bring the kids, Tanner says; the music is cheery and timeless. "The hope and optimism pays off at the end." Oliver!'s at the Palace Theatre (1519 Euclid Avenue) through August 8. Show times are 7:30 p.m. Tuesday through Friday and 1:30 and 7:30 p.m. Saturday and Sunday. Tickets are $23 to $50; call 216-241-6000.

. Artery-clogging funnel cakes. Rickety carnival rides. And smelly livestock everywhere. Fairs are a throwback to simpler times, when people were a lot tougher. (Ask your grandfather, he'll be happy to tell you all about it.) The Summit County Fair, one of the area's biggest, returns with a bunch of venerable games, food, and attractions. At least the pickle-eating match, "rough truck" contest, and motocross competition are harm-free (for spectators, anyway). It runs from 8 a.m. to 11 p.m. today and tomorrow, 8 a.m. to midnight Friday, July 30, and Saturday, July 31, and 9 a.m. to 8 p.m. Sunday, August 1, at the Summit County Fairgrounds, 229 East Howe Road in Tallmadge. Admission is $8; call 330-633-6200.