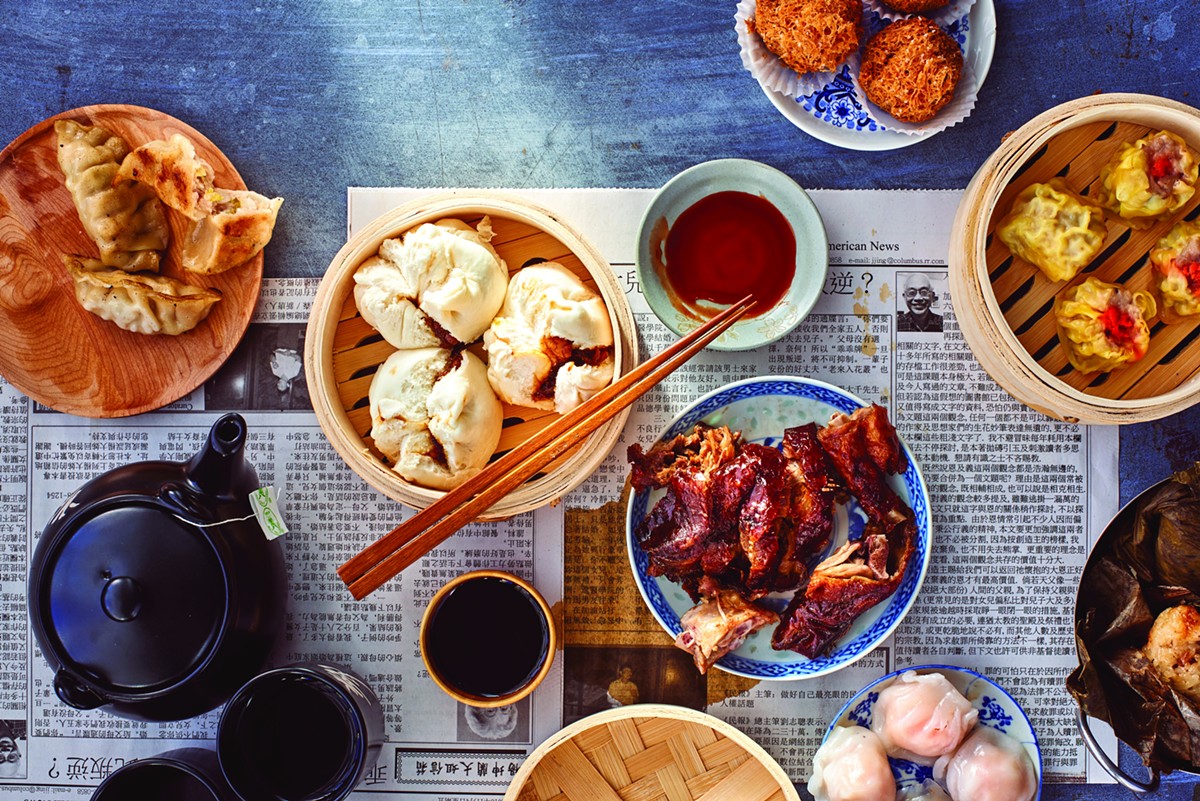 I'll never forget my first dim sum experience, thanks simply to the sheer terror of it. I was seated in a massive hall with 300 strangers, all of whom seemed to know exactly what to do and how to act. In place of menus, there was an endless procession of carts being wheeled around the room, each containing bamboo steamers that concealed their contents. Ordering items by pointing was akin to Russian roulette, where one prayed that what hid beneath the wrapper of this dumpling or that was not beef stomach or pig intestines, two possible outcomes.

I've learned to relax and roll with the punches at dim sum — and so should you. Consider this festive midmorning meal an instant brunch, where you and a group of friends drink tea, rehash the weekend's shenanigans, and enjoy exciting foods that are wheeled right up to your seats. Over time, you'll become familiar with the patterns and customs of this venerable Chinese tradition. We're here to help.

After the tea, which appears in pots on every table, it's the staggering variety of food that attracts diners. While exceptions exist, dim sum primarily consists of small portions of steamed, braised, baked and deep-fried items. They range from soft and supple steamed dumplings to crispy fried spring rolls. Most of the foods can be picked up and eaten out of hand, but some are best left to the chopsticks, and still others benefit from a knife and fork. Since most dishes are inexpensive — anywhere from $2 to $5 — it's harmless to order things that might be outside your comfort zone.

The most popular tidbits at dim sum are the steamed dumplings and buns. Experience tells us that we can often discern a dumpling's contents simply by its shape. For example, those half-moon-shaped pillows with pleats down one side of the see-through wrapper — known as har gow — will contain chopped pieces of shrimp and maybe some pork and scallions. Those delicate unsealed crown-shaped dumplings known as siu mai will be filled either with ground shrimp or ground pork. If you spot large orbs that look like Wonder Bread balls, they will very likely be steamed buns filled with chopped barbecue pork. Others, called soup dumplings, contain pork and savory broth that can catch oblivious diners by surprise.

If you spy a large leaf-wrapped bundle, it is going to be filled with sticky rice studded with pork and Chinese sausage. Break through the lotus (or banana) leaf to reveal a steamy, sweet and savory treat that is one of the best things going at dim sum. On the other end of the spectrum are the rice noodle rolls. Soft and silky textured wide rice noodles are rolled around various fillings like shrimp, pork and even Chinese doughnuts and drizzled with soy sauce. Warm and comforting congee, or rice porridge, is ladled out of carts specially equipped to handle the hot brew. The porridge can be topped with fish, pork, eggs or just a sprinkle of scallions.

The meats that one is most likely to encounter at dim sum include plates of sweet and tender steamed pork ribs in a savory black bean sauce. This popular but messy finger food is made with small pork rib tips, so expect to be spitting out bones. Golden roast ducks hang by their necks behind glass in most dim sum restaurants, so it's not surprising when they roll up tableside. Hacked into slices, the meat is dark, rich and fatty beneath a layer of crispy copper-colored skin. Don't knock chicken feet, often billed as phoenix claw, until you've tried them. Sure, they're creepy as hell to look at. But these deep-fried, braised and steamed delicacies are covered in umami-rich skin, meat and cartilage.

Go early. Dim sum is first come, first served and folks start filing in early on weekends. Get there much past 11 a.m. and you might find yourself in a line.

Bring friends. Many of the tables are large enough to accommodate eight or 10 guests. And the more friends you have, the more dishes you can sample.

See something, say something. When you spot an item that looks interesting, ask the cart person to show it to you. If it looks good, ask for it. If not, simply say no thank you.

Order what you want. If you don't see something you want, just ask for it and someone will bring it around. Likewise, feel free to order items off the regular menu.

Drink tea. Dim sum is as much about sipping tea and catching up with friends as it is eating. When your teapot runs dry, simply flip the lid open to notify your server to replace it.

Settle up. As items are ordered, servers make notes on your table's tab as they go. When you've had enough, ask the server to tally the total for payment.