From the atmosphere to the food, Chef Doug Katz and his team have created something special 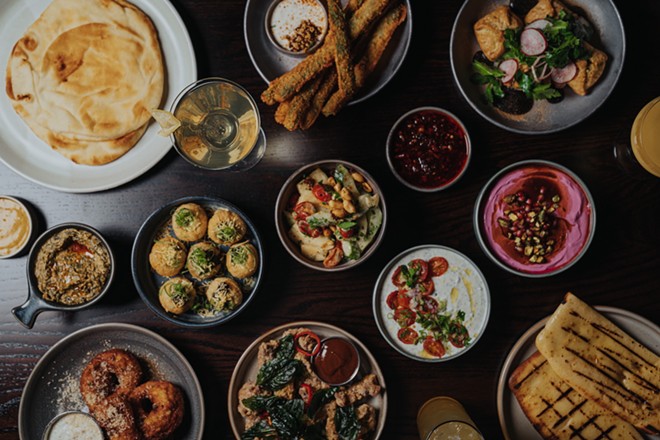 For two decades, Doug Katz made things easy for his posh east-side followers. Guests who rolled up to Fire, his Shaker Square bistro, simply handed the keys to their late-model cars over to the valet attendant. At the host stand, those same diners could relax in the knowledge that a table with their name on it was at the ready thanks to a well-placed reservation. Fire’s seasonal American menu always managed to delight – if not surprise, thrill or challenge – guests, who didn’t even need to pull out a phone or penlight to read it thanks to museum-quality lighting.

Perhaps it’s the restaurant operator version of a midlife crisis, but for his latest venture, Katz elected to move in an entirely new direction. Located in a quiet corner of Ohio City, Amba ditches suburban for urban, rewards spontaneity over preparation, and presents diners with a menu that pushes just as much as it pleases.

So much has been said about Amba in the two-plus months it’s been open that one could assume they have the place pegged. But until you experience it in person, as I finally did a few weeks back, it’s all just words on a page or screen. Diners are ripped out of their comfort zones the moment they swap the sunlit sidewalk for the shadowy interior. A walk down a trim passageway to the host stand is just long enough for your eyes to begin to adjust. Depending on your luck and timing, you’ll either be shown to a table or given an estimate for when one will be available. If it’s the latter, another short stroll lands a diner in Bar Amba, an intimate cocktail lounge in the rear that is worthy of its own visit.

Once seated, either on the dimly lit perimeter of the dining room or smack dab in the (slightly more illuminated) middle, diners can better take in the surroundings. It’s a theatrical space that weaves light and shadow, music and conversation, materials and artsy details into an atmospheric feast for the senses, including smell thanks to the aromas that float around the room.

Though Amba has its roots in a former ghost kitchen of the same name, this fully realized version has little in common with that take-out-only operation. Katz and executive chef Cameron Pishnery have crafted a tantalizing menu of Indian-inspired dishes that range from finger foods on up to full entrees. Like Zhug in Cleveland Heights, Amba all but demands the passing and sharing of plates, which need not be ordered all at once. If charting a course from a roster of 25 or so uncommon items seems daunting, lean on the servers, who are keen guides for the journey.

Better still, consider ordering a chef’s tasting for two, four, six or eight people. Our party of four went that route and was treated to course after course of stunning food for the more-than-reasonable amount of $123 (total, not each). For less than the price of a single steak and side at a fancy chophouse, the table enjoyed nine separate dishes, many of them too large to finish. Before starting our tasting dinner, we ordered a few snacks like warm naan ($5), dark and crunchy chickpea fritters ($11) with green papaya slaw, and a bowl of colorful mixed pickled veggies ($8).

Dining out is often described as a well-choreographed dinner party, but few restaurants manage to cultivate a truly loose and joyous vibe. At Amba, the table-hopping never seems to stop, with introductions and food recommendations filling the air with a jubilant buzz. The fact that this is all taking place in a nondescript cinder-block bunker in Hingetown that very recently housed a machine shop makes it all the more improbable.