Instead of fine dining or cutting-edge cuisine, it delivers a fun, approachable modern American menu 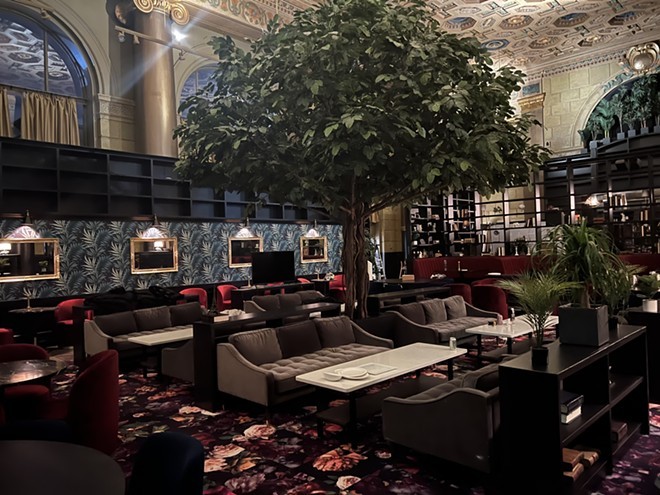 
Morgan Yagi is an artist, visionary and, apparently, magician. Who else could have pulled the rabbit that is Bartleby out of the hat that is the historic United Bank Building in Ohio City? If your recollection of this address conjures images of the spare, cavernous space that long housed Crop Bistro, prepare to be spellbound.

Upon arrival, guests are enveloped in a truffle-scented spectacle of Yagi’s creation. Rather than accentuate the 1920s-era building’s architectural features, Yagi minimized them, using the space’s outsized shell as a canvas for his handiwork. The stunning, soaring coffered ceiling is still there, of course, but the rest of the room has been brought down to human scale thanks to a million clever touches. Towering bookshelves, richly upholstered soft seating areas, casino-style carpeting and a life-like tree rising from the center of it all combine to create an intimate, clubby vibe that is unlike any other in the city.

Yagi, who also owns Hibachi Japan Steakhouse in Cuyahoga Falls, had a clear vision of what he wanted to accomplish when taking over this prominent restaurant. His stated goal was to make Bartleby feel less like an inert bank lobby and more like a buzzy hotel lounge. When Crop was mobbed, it felt like the most thrilling bistro in town. And when it wasn’t, it could seem disturbingly joyless. Bartleby avoids that pitfall by dividing the space into zones, filling those zones with endless eye candy, and swapping excessive natural and artificial lighting for the moody twinkle of real candlelight.

From our cushy red-velvet booth on one end of the dining room, we enjoyed matchless views of the unfolding scene. There were the date-night couples, selfie-snapping influencers, post-work power squads, and a few larger groups enjoying a night on the town. Those people were seated in two-tops along the wall, at tables on a low mezzanine, at sleek sofas on the main floor, and in king-size booths at either end.

One of the biggest surprises about Bartleby is that you can soak up all this fabulousness without breaking the bank. Judging by the room alone, a diner might expect to find a menu dotted with 100-dollar seafood towers, 60-dollar steaks and 40-dollar pastas. Yagi chose another path, which he referred to as “fun dining not fine dining.” In place of cutting-edge cuisine, guests can take comfort in a Modern American menu that is as approachable as it is affordable.

Settle in with a round of stellar cocktails, such as the Hummingbird ($15), a vibrant blend of gin, grapefruit, ginger and honey. I recently was reacquainted with the Chartreuse-based Bijou ($15) and the version mixed here rekindled the love affair. There is a respectable selection of bubbles, white and red wines by the glass, but there’s room for improvement. 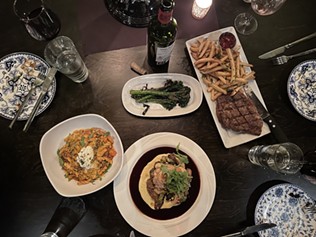 Photo by Doug Trattner
We moved on to a food-friendly bottle of Rioja ($64) in time for the appetizers to arrive. Whipped house-made ricotta ($12) is slicked with olive oil, showered with herbs and served with grilled thin-sliced country bread. Bartleby’s arancini ($14) are appropriately crispy, airy and satisfying. They get even better when split and slathered with summery tomato jam. Priced around $20, the thin-crusted pizzas are reason enough to visit. I could see hibernating here all winter long with friends, blistered pepperoni pizzas and endless rounds of Lambrusco.

Burger fans can choose between patties made with Ohio City Provisions grass-fed beef or go meat-free with Beyond. Twisty gemelli pasta ($22) is tossed in just enough meat sauce to add flavor and body without overwhelming the noodles. A fat dollop of lush ricotta on top adds creamy richness while a sprinkle of fresh basil dials up the brightness.

The only culinary sleight of hand when it comes to the roast chicken dish ($26) is how uniquely juicy the white meat is. It’s perched atop a pool of polenta-like corn puree, paired with tender fingerlings and gilded with enriched stock. The love-it-or-leave-it scent of truffles hangs in the air at Bartleby. It emanates from mushroom pizzas, cream-sauced pastas and the snappy fries that accompany the steak frites. With a menu as compact as this one, it’s a wise move to offer a choice between ribeye ($40) and filet ($44) for that dish.

As the dinner crowds thin out, the lounge is the place to be. It’s every bit as dramatic and slick as the rest of the restaurant, but on a smaller scale. On many nights, you can grab drinks and bar food clear up ‘til 2 a.m., but that depends on the demand, admits Yagi. These days, it’s hard to fault an operator from locking up early if there’s nobody left to serve.