Brim Brewery in Willoughby to Close this Weekend. Hola Tacos and Barroco Arepa Bar to Open in Space in Early Fall 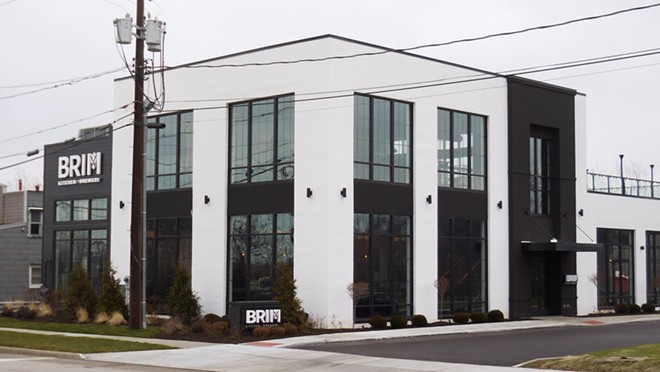 Douglas Trattner
Last month, Juan Vergara shared his plans to shutter the Barroco Arepa Bar on Larchmere Blvd. and replace it with a second location of Hola Tacos, the "L.A.-style Mexican taco stand" that he opened late last year in Lakewood. What began as a fun little side project, according to Vergara, had grown into a wildly successful concept bound for expansion.

At the time, Vergara said that he and his family were close to announcing a new east-side location for Barroco, but that the deal had not yet been inked. As of today, it has been. Barroco will be moving into the gleaming two-story, white-brick building in Willoughby that for the last three years has been home to Brim Kitchen and Brewery. Brim’s last day of service will be Sunday, August 16.

But that’s not the entire story, says Vergara. Barroco will be joined in the nearly 10,000-square-foot building by Hola Tacos. As conceived by Vergara, Hola Tacos will occupy the main floor while Barroco will live on the second level, a smaller space with indoor and outdoor seating as well as its own bar. Each space will have its own design, menu and food. (The building has an elevator.)

“What I’ve noticed with locations that are this spacious, they usually just wind up not using some parts of the restaurant when it’s not busy,” Vergara explains. “In my head, we’ll provide diners with two options and two restaurants, and they will be treated as such.”

Vergara says that Hola Tacos’ quicker service and more accessible pricing makes it a better fit for the roomy main level. But what tipped the balance even more was the attached brewery, which makes an apt companion for the taqueria.

Diners can look forward to a late-summer or early-fall opening of both eateries, but Hola Tacos likely will ignite the wood-fired grills even earlier for carry-out, drive-in or, possibly, drive-thru service. The brewing component will follow once the team secures a capable brewmaster to head up that endeavor.

“The sweet thing about this location is that it’s pretty turn-key,” Vergara notes. “We won’t need to do any major changes except decorating our spaces.”

Vergara says that much his company’s growth, which has been robust by all objective accounts, is the result of an ever-expanding team of experienced and talented family members.

“Our family has grown and as more family with various skill sets become involved in day-to-day operations – and even ownership – we are in search of more opportunities for growth,” he adds.