Cleveland Kraut is Poised to Make a Big Move 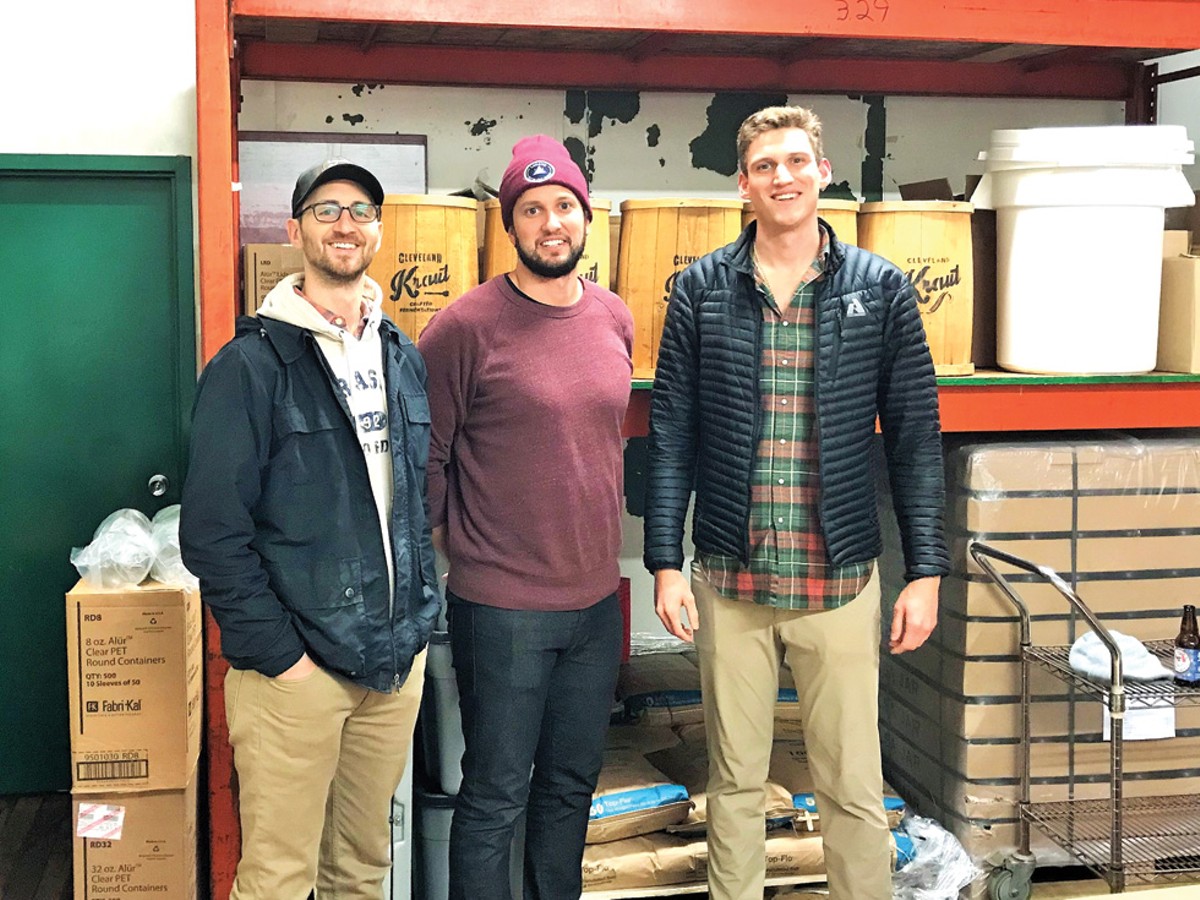 Sauerkraut is one of those foods that people either love or loathe. Getting those who dislike it to even try it can be a nearly impossible task.

"It can be an uphill battle," admits Mac Anderson. "A lot of people have this memory of their grandmother or mother forcing this mushy, smelly stuff on them. But when they try ours, their eyes light up. We literally change minds every day."

The stuff inside the jars of Cleveland Kraut has about as much in common with that foul-smelling mush as Miracle Whip does with aioli. The kraut is fresh, crunchy and vividly flavored. More importantly, it's loaded with probiotics, those beneficial microorganisms credited with everything from strong digestive health to boosting the immune system.

"Shelf-stable sauerkraut has been heat pasteurized, which kills the good stuff, and very likely has preservatives like sodium benzoate," explains Drew Anderson. "When you eat a raw, fermented vegetable like our sauerkraut, you're getting all that live goodness, all those good enzymes, all those probiotics. There are all these studies coming out that say having a healthy gut really affects your wellbeing. Not only are you pooping good, but it's related to mental health, skin health, muscle development and better nutrient absorption."

Fermented products are one of the hottest food segments going right now and Cleveland Kraut is poised to take the industry by storm. This small local startup, which took root in "Mom's basement," is on pace to hit the $1-million mark this year. But that's nothing compared to where they plan to be in five years, thanks to the recent influx of more than $1 million in venture capital.

Just three years ago, Mac, Drew and Luke Visnic held down regular jobs in banking, finance and architecture. Like many hopeful food entrepreneurs, they enrolled at the Cleveland Culinary Launch & Kitchen (CCLK) to perfect their product and attract a following. Far from living the dream, these young guys were burning the candle at both ends, capping off a full shift at their day jobs with a full night of making kraut in the rented kitchen. Weekends were spent manning the stand at fleas, farmers markets and pop-ups.

"We grew up in the farmers markets," says Drew, whose mother is Donita Anderson, founder of the North Union Farmers Market. "While all of our buddies were home watching cartoons, we were schlepping produce from Amish Country."

"At the market, we would see all these little incubator businesses. Some would fade away and others would hit, some selling well and some not selling well," says Mac, adding that he learned early on to pay special attention to branding, packaging, sales and sampling techniques, and even clothing. From the jump, the Cleveland Kraut guys donned long aprons and fished samples out of wooden barrels emblazoned with their logo.

The guys quickly outgrew their shared space at CCLK and moved into a 2,000-square-foot warehouse in the St. Clair Superior neighborhood just east of downtown. They liquidated their savings to purchase equipment, they didn't draw salaries, and the main office is in a converted janitor's closet, but accounts began flying in, starting with all Heinen's grocery stores. Because they couldn't afford to pay shipping fees, the guys would drive a 26-foot box truck overnight to New York City in order to service high-profile accounts like Fairway Market.

To make popular flavors like Classic Caraway, Whiskey Dill, Beet Red, Roasted Garlic and Gnar Gnar, the guys go through 5,000 pounds per week of Ohio-grown cabbage. The shredded cabbage ferments slowly in large drums in a temperature-controlled environment for up to a month before being cold-packed in glass jars emblazoned with the phrase, "May bubble."

"The cold temperatures slow down the fermentation process but doesn't fully stop it," notes Drew. "A good, naturally fermented product will still bubble up sometimes. Stored in the refrigerator, the kraut is good for a year, but really much longer than that."

Currently, Cleveland Kraut can be found in 500 stores across 20 states. But with growth comes complications, even when you're dealing with an old-fashioned product like sauerkraut, Drew adds.

"Manufacturing is a whole new expensive realm," he explains. "You have to keep things clean, file HACCP plans, purchase machinery, automation, staffing ... . We realized that we would need some capital, some help and more room sooner rather than later."

Last year, the guys were approached at the Fancy Foods Show by potential venture capital partners. After a lot of back and forth to ensure a great fit, Cleveland Kraut accepted just over $1 million of investment. They are now negotiating a lease for a 15,000-square-foot space less than a mile away from their current home. They hope to be up and running early next year. The move will set them on a course to hit a projected $10 million in annual sales by 2022 while employing a fulltime staff of 25.

Not bad for some kraut.