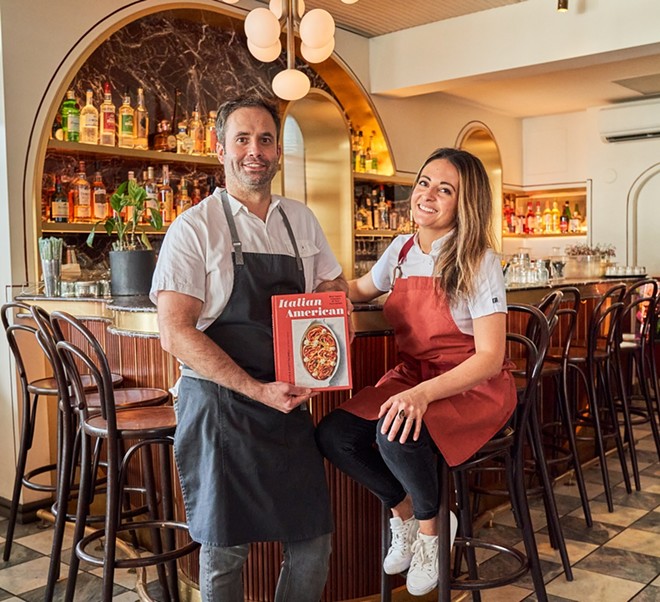 Don Angie restaurant opened in the West Village neighborhood of New York City in 2017 and has been absolutely mobbed ever since. The smart, stunning bistro landed on Esquire’s annual list of Best New Restaurants in America, garnered a glowing two-star review from Pete Wells of the New York Times and recently snagged a coveted Michelin star. Thanks to Instagram, the eatery’s pinwheel lasagna for two became the most “liked” food in the whole of Manhattan. (This writer can attest that it is as enjoyable to eat as it is to observe.)

The restaurant is owned by Cleveland-native Angie Rito and her husband Scott Tacinelli. Rito’s family has operated an Italian bakery in Northeast Ohio since 1965, originally in Parma but now in Brunswick. The couple will be touching down in Cleveland for a pair of casual events in support of their just-released cookbook “Italian American: Red Sauce Classics and New Essentials (Clarkson Potter).”

According to Rito, the book features a combination of restaurant dishes and more approachable recipes for the enthusiastic amateur.

“It’s geared to home cooks so it has a more broad appeal,” she says. “We didn’t want it to be just a pretty coffee-table book about the restaurant with impossible recipes. It does have a handful of signatures from the restaurant, including our lasagna, which is not difficult but more of a weekend project with a lot of steps.”

That dish, along with many others, including the ethereal chrysanthemum salad, have made Don Angie a shining star on the New York food scene. When asked about the restaurant’s meteoric ascent to the stratosphere, Rito credits her and her husband’s loose interpretation of Italian-American cuisine.

“In New York City there is a lot of great Italian food to be had,” she explains. “There are restaurants that specialize in regional Italian — that focus on Amelia Romana or whatever — and do a really fantastic job. And then there are restaurants that do Italian American that are kind of red-sauce themed. We are passionate about all that, but we set out to come up with our own style of Italian cooking because, from a business perspective, in order to survive we wanted to differentiate ourselves.”

That same day, from 4 to 6 p.m., the couple will bring the party to Ohio City Provisions (3208 Lorain Ave., 216-465-2762) for another casual book-signing event. Along with the drinks, the couple will prepare a few dishes from the book like grilled mortadella spiedini, pepperoni rice-stuffed mussels, chicken and nduja meatballs and the famous pinwheel lasagna.