Felice Urban Cafe Has New Owners, But Stays in the Family In 2008, Margaret Mueller opened her first restaurant, Felice Urban Café (12502 Larchmere Blvd., 216-791-0918) on Larchmere Boulevard, just around the corner from Shaker Square. The fact that she did so at the tender age of 79 years old surprised nobody who knew her well. Over the long course of her remarkable life, Mueller has been a wife and mother, earned two Master’s Degrees, enjoyed a career as a county probation officer, and ran for Congress – four separate times.

Set in a charming turn-of-the-century Craftsman-style home, the unique and eclectic eatery has grown to become one the most beloved spots in the neighborhood. During summer, diners flood the expansive patio and fill up the attractive carriage house, which was transformed into a farmhouse-chic bar. Come the colder months, the house swells like a wintertime beehive, with activity on the main floor with four-season patio, in the second-floor barroom, and in the chill attic lounge. While there, guests enjoy wonderful cocktails and a menu filled with small plates and entrees with a decidedly Mediterranean bent.

But even Mueller couldn’t keep it going at that pace. Approaching 90, the time had come for her to sell the business. Mueller’s children, who had been involved over the years in some capacity, had no interest. All signs began to point to a scenario that would have resulted in a new name, concept and staff, a true loss to the community that has grown to love and support the unique eatery.

At the eleventh hour, Jack Mueller, Margaret’s grandson, and his husband Paul Neundorfer stepped in to save the day and restaurant. Like the original owner, the new ones do not come from a restaurant background. Neundorfer owns a landscape architecture firm and is co-founder of the non-profit Refugee Response. Mueller is a real estate developer. But it’s not like they are going it alone, they say.

The transition officially took place in early November. Margaret, of course, is elated with the recent course of events.

“I am thrilled that the restaurant will stay in the family,” she says. “When I started this journey 10 years ago, I could never have imagined all that Felice would become. It has become a neighborhood anchor, beloved by so many, and none more than me. I am delighted that with Jack and Paul’s commitment, Felice will have the opportunity to continue to grow and thrive.” 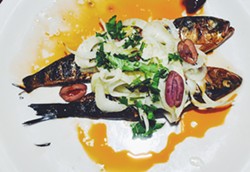 Plans call for updating the menu under the direction of longtime chef Jose Coronado. Classics like the grilled sardines, sautéed octopus, house burger and St. Louis ribs are going nowhere, but they will be joined by more vegetarian and vegan options. Weekend brunch will begin to make an appearance. A draft beer system might finally flow to the second floor bar and dining room. The décor throughout will be updated and come spring, Neundorfer will turn his professional talents loose on the patio and gardens.

Meanwhile, Margaret will keep a watchful eye over all of it from her apartment balcony, which is directly across the street.

“She told me, ‘I want to sit here on my porch and watch all the people at the restaurant,’” Jack Mueller says. “I’ve always been so proud of my grandmother for starting this place. She started it when she was 80 years old. We all kind of thought she was a little crazy, but it really took off and it’s become a great neighborhood place.”