Heart of Gold Delivers a Tasty Menu, and a Service Experience, Very Much of These Times 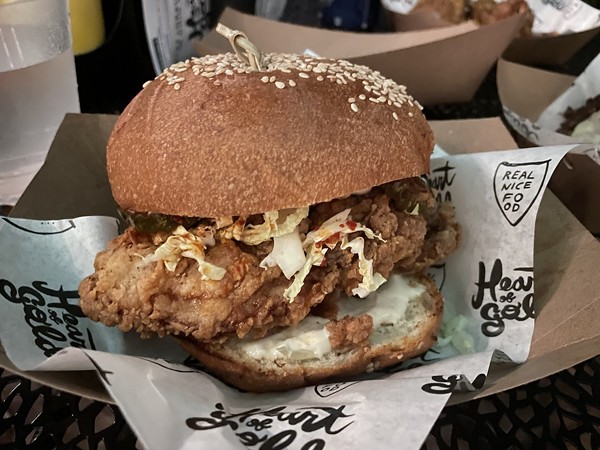 Photo by Doug Trattner
The chicken sandwich at Heart of Gold

I’ll never forget the time I spent $18 on a cocktail that arrived in a plastic cup. The drink was the Cosmic Trigger at Heart of Gold, an ice-filled concoction of gin, tea, amaro, honey and lemon. It was a pleasantly balanced, sweet-savory drink that would have tasted infinitely better in a proper Collins glass. If you don’t believe that appropriate drinkware enhances the cocktail experience, then you don’t take your spirits seriously.

At the peak of the pandemic, restaurants that were fortunate enough to survive by pivoting to take-out had no choice but to rely on single-use plastic containers, utensils and bags. As dine-in service returned, those same eateries continued to use disposables because they were believed by many to be the safe, sanitary option. But now that most staff and diners are vaccinated, and the experts assign the blame to airborne spread as opposed to surface transmission, what’s the motivation – apart from pleasing Big Plastic – to continue the practice?

The environmentally depressing glut of disposables – glasses, utensils, plates, napkins – is all the more incongruous given the surroundings. The Plum, the restaurant from which Heart of Gold hatched, was one of Cleveland’s most attractive dining spaces. The sleek, minimal bistro was painstakingly sculpted out of a 150-year-old building in Ohio City over the span of three years. Heck, the intricately snaked electrical conduit here is worth visiting alone.

But if the Plum has taught diners anything over the past five years, it is that restaurants either adapt or die. The seasonal, chef-driven menu, piloted by chef-owner Brett Sawyer, was always a moving target fueled by ambition, creativity and whimsy. But the pandemic put an end to all that and owner Jonah Oryszak announced that after being closed most of 2020, the Plum would not reopen. Instead, the space would become Heart of Gold, an even more casual neighborhood bar and kitchen.

By now, diners are increasingly familiar with the quick-serve dining model that sprang to life as a way of reducing labor costs. At H.O.G., diners walk in, place their order at the host stand and grab a seat. Drinks are ordered at the bar regardless your location inside or out. Want a glass of water? Pour it yourself from the Igloo cooler in the stunning but largely empty dining room. Care for another round of beverages? Get up and make your way back to the bar. At meal’s end, a friend at the table wondered aloud without a hint of sarcasm, “Are we supposed to clean up after ourselves as well?”

In Cleveland, Peak Fried Chicken Sandwich has given way to Peak Smash Burger, and Heart of Gold’s version ($14) is on point. Chef Adam Bauer doesn’t pile on the embellishments, allowing the beefy goodness of the twin patties to shine. The meat shares space inside the downy-soft milk bun with American cheese, sweet onions, dill pickles and Maggi-seasoned mayo. It is aggressively delicious. Because no self-respecting 21st-century fast-casual restaurant would be caught dead without a chicken sandwich, Bauer offers the “Obligatory Fried Chicken” sandwich ($12) in regular and spicy preparations. No surprise, she’s a beaut. The craggy crusted, juicy-centered bird is paired with napa slaw, spicy pickles and seasoned mayo.

We ordered four sandwiches in all, with the intent of slicing, passing and sharing the spoils. That was easier said than done when one is dealing with flimsy utensils and paper boats. But pass and taste we did, with the Old Major ($14) edging out the Mushroom-Meatloaf Melt ($14) for honors in the third and fourth positions. Billed as a “vegetarian Big Mac,” the Old Major was ridiculously savory, satisfying and impressive given that it is completely vegan (save for the cheese).

Bauer picked up his wing skills while working at Greenhouse Tavern, and you can taste the talent in the form of the chicken drums ($10). Like his former employer’s renowned wings, the chef’s drums are cured, slow-cooked in fat and deep fried to order, leaving them uber-crisp but also meltingly tender. Next time I’ll skip the slightly metallic tasting lemon-pepper dry rub in favor of the house hot or sesame garlic. Pair any and every sandwich with an order of waffle fries ($4).

A handful of salads and grain bowls rounds out the menu, with the Caesar ($10) largely faithful to the classic except for the righteous fried capers. H.O.G. keeps the menu pretty tight so the kitchen can stay seasonal and have some fun. Recent specials have included a popcorn chicken bowl with Ohio corn and pepper gravy, a brisket-stuffed footlong topped with pierogies and slaw, and a vegan crunch wrap with mushroom duxelles and salsa verde.

Specials like those, along with recurring deals like “nuggie night,” give food lovers plenty of cause to keep their eyes glued to the restaurant’s social media pages.