Immigrant Son Brewery in Lakewood Back on Track After Pandemic Delays, Vinnie Cimino Joins as Chef 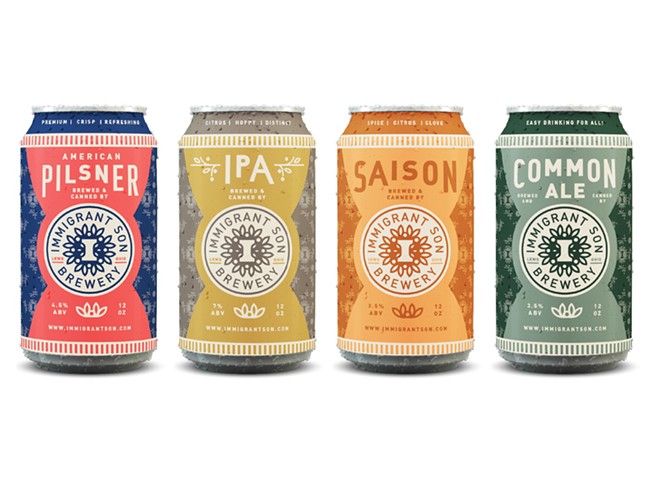 “There is nobody who is more excited and more desirous to open than me,” says Andrew Revy, founder of Immigrant Son Brewery (18120 Sloane Ave.).

This time last year, Revy was eyeing a spring opening for Immigrant Son, which was to be (and still will be) Lakewood’s first and only brewery. But like many projects, his was put on hold during 2020 because of what he calls “direct and indirect effects of COVID.”

But the project not only has resumed but is making significant progress. The skeleton of the brewhouse is coming together and much of the equipment is standing by in storage. For now, “spring” is as specific a date as Revy can share because of factors out of his control.

“The three major things that we don’t have control over right now are COVID, the weather and permitting,” all variables that will determine the actual date, he explains.

Not much has changed since we last spoke with Revy about the brewery and brewpub. The former Constantino’s Market in Lakewood, a 9,000-square-foot building with its own parking lot, will feature a 10-barrel brewery in one half and a 200-seat bar and restaurant in the other. On tap will be 20 house beers, but also a full cocktail program and wine list.

The brewer is Cara Baker, and she’s spent much of 2020 perfecting recipes and chomping at the bit to get brewing, says Revy. In addition to the four core beers – American Pilsner, IPA, Saison and Common Ale – Immigrant Son will debut with a Zydrunas Ilgauskas collaboration beer.

What is news is the signing of Vinnie Cimino as chef. Most notably, Cimino is an alum of Greenhouse Tavern and Trentina, but also Michael’s Genuine and Summer House.

“It’s a great grab and I’m extremely excited,” says Revy. “He’s going to be a really great addition to what we want to accomplish here at Immigrant Son. It’s equal attention to the quality and consistency of beer and the food as well. Vinnie has great relationships with a lot of the local and regional farms. And he’s a beer nerd himself, so he and Cara will work great on collaborations for menu items and beer pairings and beer dinners.”

While Revy had to sit all of 2020 out, the time has allowed him to consider how best to move forward with respect to safety.

“I’ve had plenty of time to think and plan to ensure the safety of both our customers and our staff,” he says. “All the retrofitting that everyone did to help out with the mitigation, we’re doing that, but we have the benefit of doing it up front, certain things that I think will become part of the norm.”

Those measures include upgrading ventilation systems, installing glass booth dividers (instead of makeshift plexiglass), allowing for flexible seating plans and finalizing plans for the patio.

Also, Revy adds, “Our space is nice and big and open.”