And you can buy them until 2 a.m. every day of the week 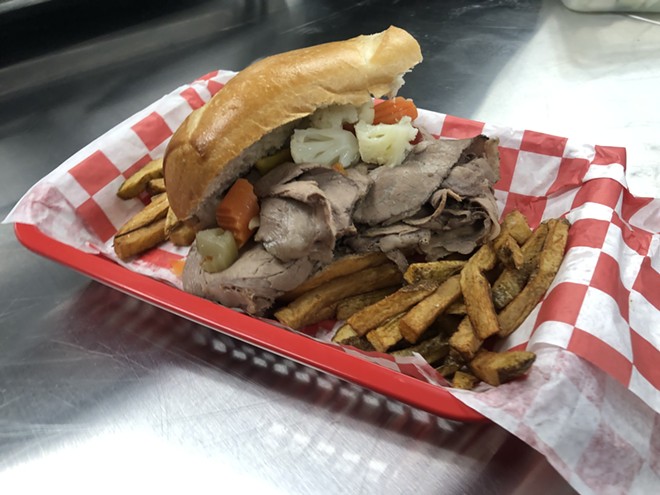 “This place opened about a week ago and I have a major issue,” says Jacob Kelly, who just opened Au Jus in Parma with his partner Tiffany Ballog. “We’ve been 10 times busier than we thought it would be.”

Thanks to this summer’s smash hit “The Bear” on FX, interest in authentic Chicago-style Italian beef sandwiches has never been higher. That yearning appears to have translated into a promising launch for Au Jus (5875 Broadview Rd., 216-795-5063), which specializes in that drippy Italian classic.

“A couple years ago, before Covid, we were going to franchise a Chicago-style sandwich spot,” says Kelly, adding that Ballog is a native Chicagoan. “But then we thought, why would we pay for brand recognition when there isn’t any in Ohio.”

The owners of Au Jus are striving to do things by the book. They slow-roast top round beef for more than five hours before chilling and thinly slicing it. The drippings are turned into flavorful au jus sauce. The sliced roast beef is warmed in hot au jus, piled into long French rolls and topped with sweet or spicy giardiniera. Additional au jus is served on the side for dipping, but sandwiches can be dunked by request.

In Chicagoland, the sandwiches are typically enjoyed without cheese, but a layer of provolone is certainly acceptable. Au Jus happens to have liquid cheddar on tap and, frankly, Kelly is surprised by the number of customers who ask for it to be added to their beefs.

“Even though I would never put liquid cheddar on an Italian beef, if 20 customers a day come in and order it, I’ll sell it all day long,” he explains. “I want to give the people what they want.”

In addition to the beef sandwiches, Au Jus sells sausage, pepper, onion and provolone sandwiches “just like at the state fair,” notes Kelly, along with Cubans, Phillys and fully loaded Italian subs that are served cold or pressed. The shop was selling breakfast items but ditched them because they were slowing the operation down.

Before opening, Kelly vowed to sell sandwiches until 2 a.m. every day of the week and that’s a promise he has kept so far. Soon, he’ll flip the switch that launches late-night delivery service through third-party services, which should please late-night diners in and around Parma.

Au Jus is mainly carry-out, but does have a handful of seats.