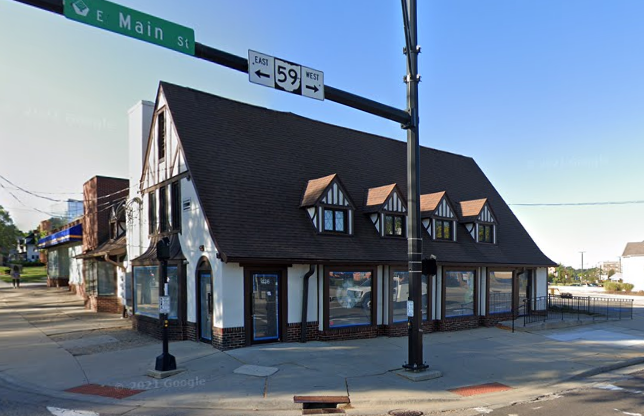 Google Maps
Former home of Kent Starbucks to become Cleveland Bagel Cafe.
When Starbucks closed its Kent store at E. Main and Lincoln streets last summer, the move set off a wave of concern for the future of the building. Long before Starbuck’s took possession, the 1920s-era Tudor-style structure was home to Brady's Café, Captain Brady's and Robin Hood restaurant, the original occupant. Kent State University purchased the property a few years ago and there was talk about the building being demolished.

After many discussions, the property has landed in the hands of Mike Beder, a well-known businessman in the area. Beder has operated numerous businesses in the area, namely Water Street Tavern, Venice Café, Franklin Hotel Bar and Tree City Coffee.

“The university really wanted to put something vibrant and local back in there and I was the first call they made,” says Beder. “And as much as I was ready to get out of coffee a couple years ago, the opportunity in that space was too great.”

Along with partners Evan Bailey, Charlotte Varney, and Nicole Awad, Beder will open Cleveland Bagel Café in early May. Beder knew that he wanted to feature Cleveland Bagel at the café, having carried them at Tree City Coffee, but he decided to take the partnership one step further.

“I had brought in Cleveland Bagel back in Tree City and had a ton of success with them,” he explains. “This was an opportunity for it to not be just another coffee shop. With Cleveland Bagel we could differentiate ourselves and get off to a quick start by teaming up with a recognizable product.”

Beder says he’s been a fan of Cleveland Bagel’s par-baked products, which are baked fresh each day in-store. He’ll use those bagels as a base for a breakfast, lunch and dinner sandwich menu that goes well beyond the typical bagel and a schmear.

“Our concept will be a broadened version of Cleveland Bagel Co.'s great offerings, including an expanded sandwich menu and full coffee bar,” he says.

Given the café’s location, it will be open from morning until night, adds Beder.

“The property is located right between the Journalism school, the Fashion school and the Architecture school, arguably three of the most time-intensive majors where kids will want coffee and a sandwich.”

The Cleveland Bagel Cafe will be located at 436 E. Main St. in Kent.