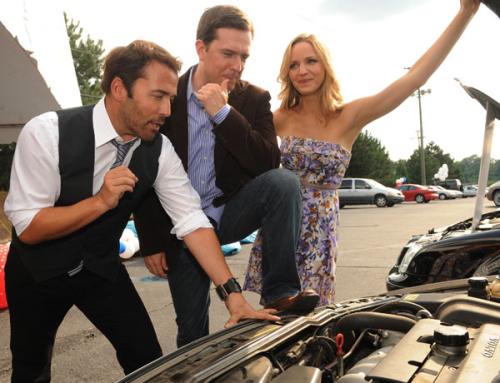 In The Goods, which opens areawide on Friday, Jeremy Piven is Don Ready, leader of a team of hard partying mercenary salesmen (Ving Rhames, David Koechner and Kathryn Hahn) hired to keep a used car dealership from going into bankruptcy. While working his sales magic, Don becomes attracted to a woman(Jordana Spiro) already engaged to the biggest douchebag in town (Ed Helms). Because as everyone knows, smart and attractive young women in the movies always face a shortage of decent guys who want to date them, so it’s either marry a loser or become an old maid. But maybe, just maybe, Don will overcome the tragedy from his past and not only save the dealership, but also find a way to win the girl. That’s pretty much the extent of the formulaic plot. Luckily, this is a comedy, so while plot does matter, jokes matter more. And in that respect, The Goods has the goods. Some of the humor falls flat, but there are still an awful lot of laughs here. The excellent supporting cast helps a lot, too. ** 1/2
Scroll to read more Movie Reviews & Stories articles
Join the Cleveland Scene Press Club