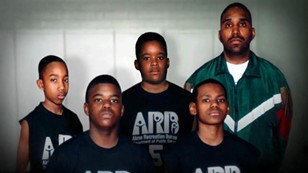 "Eat Shit, Golden State." -12-year-old LeBron.
Cleveland Cinemas, in conjunction with 92.3 The Fan, will host a special free screening of More Than a Game Tuesday at 7:30 p.m.

The film is an inspirational documentary telling the story of LeBron James and his band of brothers on the St. Vincent-St. Mary High School basketball team.

Game one of the NBA Finals isn't until Thursday, June 4, at 9 p.m. (on ABC), so a Tuesday screening might help tide you over.

“The Capitol Theatre has a special relationship with More than a Game,” said Jonathan Forman, President of Cleveland Cinemas, in a press release. “It was the first film shown at the Capitol Theatre at its grand reopening in October of 2009 and we are happy to bring it back to the big screen as the Cavs get ready to defeat the Warriors.”

Tickets are free and will be distributed only at the Capitol Theatre Box Office on the day of the screening. First come, first serve.

Expect a festive atmosphere. Though we haven't confirmed with Capitol management whether or not confetti will be involved, both Cleveland Cinemas and 92.3 The Fan will be awarding door prizes.

Watch the trailer below: