Flame and Citron opens at Cedar Lee this weekend

This weekend, the Cedar Lee Theatre exclusively opens the Danish Nazi film Flame & Citron. Here's our review of the movie. 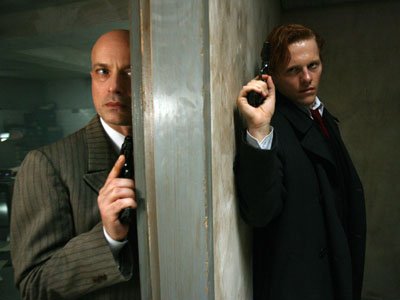 Flame & Citron Based on a true story, this is a companion piece of sorts to Quentin Tarantino's Inglourious Basterds. No, Danish Nazi hunters Flame (Thure Lindhardt) and Citron (Mads Mikkelsen) don't skin their victims, but they do relentlessly go after anyone and everyone who has ever pledged allegiance to Das Fuhrer. They start to question their assignments, however, when it seems they might be assassinating innocent people, so they strike out on their own and put together a renegade team of hit men. Adding to the drama is the fact that Flame has trouble separating himself from his girlfriend Ketty (Stine Stengade), whom he suspects could be a sympathizer. Featuring a veteran group of Danish actors and actresses, director Ole Christian Madsen's film is one of the highest grossing Danish movies of all time. You can see why. It's visually striking, and the numerous plot twists keep the story interesting right to its brutal end. *** (Jeff Niesel)