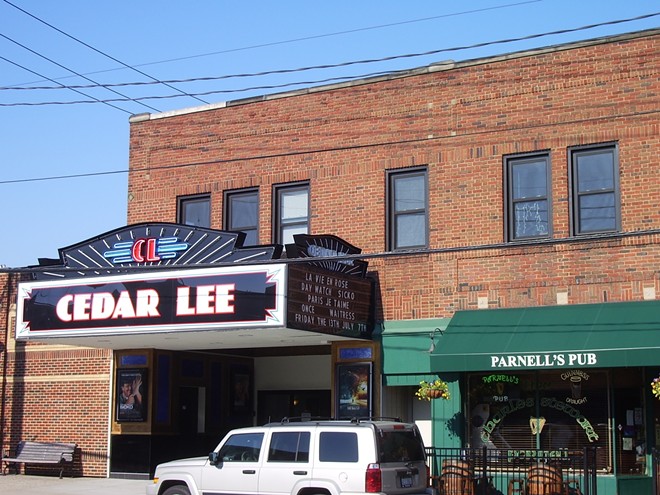 Cleveland Cinemas
The Cedar Lee in an earlier era, (before the relocation of Parnell's).

This is a public service announcement for movie theater popcorn goblins like yours truly.

In honor of National Cinema Week, (Oct. 7-13), Cleveland Cinemas will offer unlimited refills of popcorn and fountain drinks at each of its four locations: the Cedar Lee, Capitol Theatre, Chagrin Cinemas and the Apollo Theatre in Oberlin.

And for the bargain hunters, the local movie theater chain will also extend its $5 Monday movie deal to Tuesday.

(Note that more than 1,200 theaters nationwide are participating in National Cinema Week, and that many of them are offering free popcorn refills as well. We're just here to promote the local chain. The whole point of National Cinema Week is to encourage folks to go back to the movies, an extension and expansion of National Cinema Day earlier this year, during which theaters offered $3 tickets to all films all day long.)

"The shared experience of watching a movie with an audience is like no other," said Sean Denny, Cleveland Cinemas' Director of Operations, in a statement. "Connecting to the story. Connecting to each other."

Big screens rule. You can check out the movies and showtimes at Cleveland Cinemas' website.  Amsterdam, Bros and Don't Worry Darling seem to be the big three titles right now. Next week, the Russell Crowe-Zac Efron  Vietnam drama The Greatest Beer Run Ever opens at the Cedar Lee.