A fictionalized account of what it would have been like when Salvador Dali, Federico Garcia Lorca and Luis Buñuel met for the first time, Little Ashes makes its local premiere tonight at 7 at the Cleveland Museum of Art. It screens again at 1:30 p.m. Sunday, Dec. 7. Here is our review of the film. 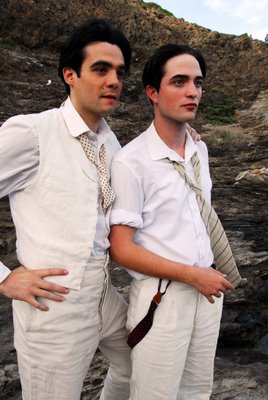 Little Ashes A stereotypical arthouse film that flopped when it came out in limited release earlier this year, Paul Morrison’s movie imagines what it must have been like when painter Salvador Dali (Robert Pattinson, who looks ridiculous in a thin handlebar mustache), poet Federico Garcia Lorca (Javier Beltran) and filmmaker Luis Buñuel (Matthew McNulty) met in Madrid in 1922. The three instantly bond when they meet at university, but the friendships become strained as Dali and Lorca begin a torrid love affair made even more complicated by Dali’s reluctance to fully commit to a homosexual relationship. He eventually backs away, and a disgusted Buñuel leaves the two, moving to Paris to pursue his filmmaking ambitions. While Morrison obviously took some liberties with the story (Dali has denied he ever slept with Lorca), that’s not the issue with Little Ashes. The real problem is that it’s poorly acted and pretentious and makes these three literary figures caricatures rather than characters. * (Jeff Niesel)