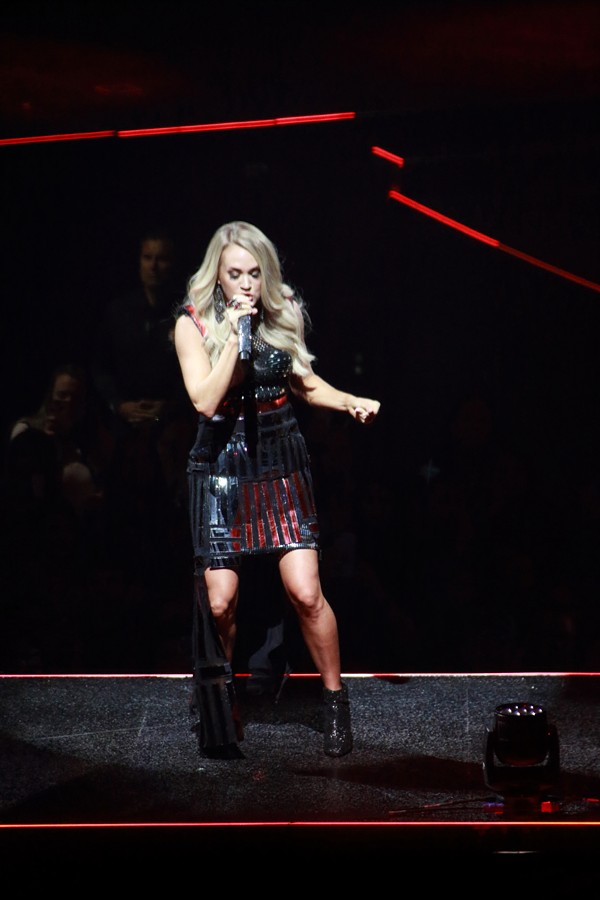 Jeff Jones
Two hours into last night’s show at Rocket Mortgage FieldHouse, singer Carrie Underwood was still wailing away as she started a two-song encore that included “Cry Pretty.” Much like a marathon runner who has the ability to sprint during the last mile, Underwood appeared indefatigable as her voice showed no signs of fatigue even though she’s nearing the end of her massive Cry Pretty Tour 360.

Over the course of her 15-year career, Underwood has nicely transitioned from American Idol sensation to country pop diva, and last night’s concert in front of what the venue announced was a sold-out crowd (a portion of the upper deck was curtained off) came complete with an elaborate eye-shaped stage positioned on the arena floor, costume changes, pyro and lasers. The show utilized 36 projectors and 19 video projection screens along with 15 stage elevators and more than 400 moving lights. And the members of her eight-piece band played some 22 different types of instruments during the concert.

Underwood began the set with “Southbound,” “Cowboy Casanova” and “Good Girl,” three of her more rousing songs. A funky bass riff drove the resounding “Southbound,” and Underwood sounded particularly soulful on “Cowboy Casanova.” Slide guitar and fiddle brought a country vibe to “Last Name,” but heavy bass overwhelmed “Backsliding” during one of the concert’s only moments when the sound mix wasn’t dialed in.

Underwood got back on track with “Church Bells,” a Stevie Nicks-like track that found Underwood occasionally playing guitar. With “Two Black Cadillacs” and “Blown Away,” she again indulged in some incredible vocal acrobatics. During “Flat on the Floor,” she held notes for what seemed like an eternity, and she did the same during the power ballad “Wasted.”

During the show, Underwood somewhat awkwardly received a CMT Artist of the Year award and hastily delivered a short speech to a live TV audience. CMT also aired her performance of a couple of songs last night too.

After the award presentation concluded, Underwood talked about the “incredible ride” she’s had since American Idol and revisited a few “blasts from the past” during a short, stripped down medley that again allowed her to show off her vocal prowess, particularly when she inserted a snippet of the Aerosmith classic “Dream On” into “Just a Dream.”

“Something in the Water” provided Underwood with yet another chance to show off her vocal prowess, and she invited openers Runaway Jane and Maddie & Tae back to the stage for a tribute to female country singers who “taught us how to sing,” as Underwood put it. The group expertly segued from songs such as “Walking After Midnight” and “9 to 5” to tracks like “She’s in Love with the Boy” and “Man! I Feel Like a Woman.”

After the openers exited the stage, Underwood launched into “Undo It,” a pop number that really packed a punch, especially when she added a snippet of George Michael’s “Freedom” to the outro. For “Champion,” she invited a woman she introduced as “Kristen from Rootstown” to join her in a duet that the guest vocalist dedicated to her father. Kristen nailed it and matched Underwood every step of the way. “Kristen can sing!” Underwood said when the song ended.

The set’s final track, “Before He Cheats,” became a righteous sing-along that found audience members belting out lines like “I dug my key into the side/Of his pretty little souped-up four-wheel drive/Carved my name into his leather seats/I took a Louisville slugger to both head lights” in unison.

Runaway Jane began the night with a 30-minute set that demonstrated the trio could harmonize well, but too often, the songs came off as saccharine pop numbers without much substance. The same couldn't be said for Maddie & Tae, who also opened. Powerhouse singer Madison Marlow proved to be a dynamic performer with one hell of a voice. She sounded particularly soulful on the rousing set opener "Tourist in This Town" and never let up during a terrific 30-minute set.