A Night at the Bar

Oscar Rodriguez was on his way to big things. He blew it all in an hour. 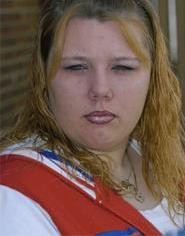 Walter Novak
"I felt bad when I heard the guy got fired," says Stephanie Schultz.
The Bottom's Up, a shot-and-beer joint in Lakewood, isn't the most romantic place for an illicit rendezvous. But that's exactly where the two girls found themselves, waiting for him to show.

Nichole Habbershon, a skeletal woman with a Best Cuts perm, and her friend Stephanie Schultz, a stout blonde not old enough to drink, had gone from total strangers to close confidantes in the past year -- an odd year that was about to get weirder.

The two had been snared in a round-up after a string of West Side robberies. Their boyfriends, Thomas Holbert and Charles Scott, were alleged to be the key players, and the girls were charged with hiding them.

For the past year they'd sat in the Cuyahoga County Courthouse. It was there, says Habbershon, that Schultz developed a devastating crush on Oscar Rodriguez. He just happened to be the guy prosecuting them.

His miniature frame and coiffed hair made the 32-year-old husband and father look less like a lawman than a guy who likes to be held. But those around the courthouse knew Rodriguez to be a rising star.

"He would have gone to the top of the office," says attorney Patrick Lavelle. "There's no question about that."

He surely knew better than to be messing around with Schultz. Even to speak to her without her attorney present would be a severe ethics violation, putting his career at risk. But as the two saw one another day after day, Schultz says, the assistant county prosecutor loosened up.

It seemed innocent at first -- a wink, a wave, a friendly "What's up?" They even chatted sometimes, when no one was looking. Yes, he was definitely flirting with her, she thought.

Then, one Thursday afternoon in February, Habbershon called Rodriguez to tell him she was ready to cut a deal. It was a call that should have gone to her attorney. For Rodriguez to call back would be a serious ethics violation. But he was on the phone half an hour later.

"What are you guys doing tonight?" Habbershon says he asked. He'd be at Bottom's Up around eight, he told her. She and Schultz should stop by.

"I wasn't going to go," says Habbershon, "but Stephanie begged me."

Just before eight, Rodriguez walked into the bar, still dressed in his pressed slacks and shirt. He slid into the booth next to Schultz and put his hand on her thigh, Schultz claims, offering to buy her a drink.

No thanks, she said.

Rodriguez bought himself a Corona. Habbershon took a Bud Light.

"He told me I couldn't be without for five years," Habbershon says, a reference to her boyfriend's prison sentence. Then he caressed Habbershon's cheek with his palm and went for broke. "He told me he was flirting with me to my face, and I didn't know what to do about it."

Habbershon turned the conversation to her boyfriend's case. A jury had acquitted Scott of the robberies, but in a separate case, Rodriguez had pinned him for a shooting. Scott was given five years, but he was asking for a retrial.

She says Rodriguez told her "that feather ain't comin' out of my hat." But he did provide a little trick of the pros for next time: Pay the witnesses not to come to court. He called it an "out-of-court settlement."

Even as the words were coming out of his mouth, it seemed as though someone had splashed ice water on his face. He excused himself and left in a hurry.

The next day in court, "That dude was white," says Habbershon. "His forehead was sweating. He was pacing back and forth all day."

Rodriguez pulled her to the back of the courtroom, says Schultz. "You didn't tell nobody, did you?" he nervously asked. She said she hadn't.

But Habbershon had told her boyfriend. And that Friday, during his hearing for a retrial, Scott asked Judge Stuart Friedman if he could address the court. "I need to discuss foul play that came along with Oscar Rodriguez," said the 19-year-old. He told the court everything. And while it didn't sway the judge -- he denied Scott's retrial -- the revelation reached Prosecutor Bill Mason.

In a closed-door meeting with Mason, Rodriguez admitted to meeting the girls at the bar -- though he denies touching them. He offered his resignation. Mason, who had watched Rodriguez rise from rookie to supervisor, had no choice but to accept.

But the dalliance didn't escape the attention of Channel 19. Reporter Tom Meyer interviewed Habbershon and Schultz outside the Bottom's Up, where they told him about their encounter.

Suddenly, a rising legal star was out of work, pegged as a dimwit who allowed his loins to overrule his better judgment -- just like so many of the men he prosecuted.

Lawyer Bill Summers still can't believe it. Rodriguez is "just as straight-up and honest as they come," he says. "The only way I'd ever believe it is if I saw it with my own eyes."

Nor does Rodriguez seem to believe it. Standing on his porch on a quiet street in Lakewood, the former prosecutor fidgets uncomfortably, as if he's expecting a TV van to come screeching up at any moment. He apologetically refuses to talk about that night at the bar.

"You have to understand," he says, looking back at his house, his two young kids peering out the window at the visitor. "I have a lot to lose."

Then he begins to cry.