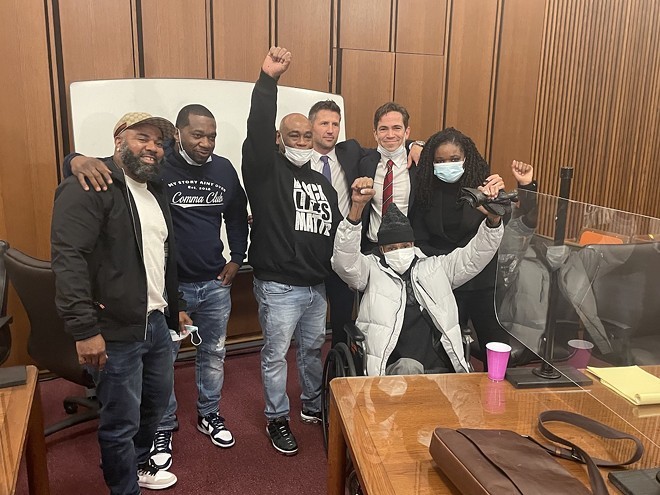 Courtesy FG+G
Isaiah (seated) is pictured with fellow exonerees Ru-El Sailor, Charles Jackson, and Laurise Glover, who served 15, 27.5, and 20 years respectively, for crimes they did not commit.

Isaiah Andrews — the Cleveland man who last year was found innocent in a new trial over his wife's 1974 murder, which was ordered by an appeals court after evidence withheld by Cleveland police during the original trial was discovered by the Ohio Innocence Project — has filed a civil rights lawsuit against the city of Cleveland and ten officers.

Andrews had maintained his innocence since day one, but spent 45 years in prison for the murder he didn't commit before a jury unanimously found him not guilty in last year's trial.

His path to freedom has been a long and twisted one.

His lawyers in 2018 sought a court order to test samples collected from the body of Regina Andrews — fingernail scrapings and vaginal swabs — with DNA technology not available at the time of the trial. She was found near Forest Hill Park wrapped in bedsheets, brutally stabbed, with her nightgown pushed up around her waist, indicating a sexual assault. Isiah Andrews had told police he'd been out all day on Sept. 18, 1974, running errands and selling clothes and returned to the hotel room just east of downtown he shared with his wife to find her missing.

In communication with the Cuyahoga County Coroner's Office in the aftermath of that request, the Ohio Innocence Project discovered the office's file on the case included Cleveland police reports and narratives pointing toward a separate suspect named Willie Watts, who had been in the area where Andrews' body was found wrapped in hotel bed linens in Forest Hills Park and who had been in Howard Johnson hotel the night before in a room that was missing its linens the next day.

This was never disclosed to Andrews' lawyers at the time.

Once his new lawyers found the evidence, they also discovered that Watts went on to accumulate a criminal record littered with violence against women.

No physical evidence, meanwhile, tied Andrews to the crime and he was convicted on the basis of shaky eyewitness testimony from a maid and short-term tenant of the motel where the couple had been staying after getting married three weeks earlier.

"He deserves an acknowledgment from the government actors who put him in prison for decades that what happened to him was wrong," one of his attorneys, Sarah Gelsomino, told Channel 5.

Brian Howe of the Ohio Innocence Project added: "I can’t think of a more egregious case of covering up evidence of innocence in any case I’ve worked on."