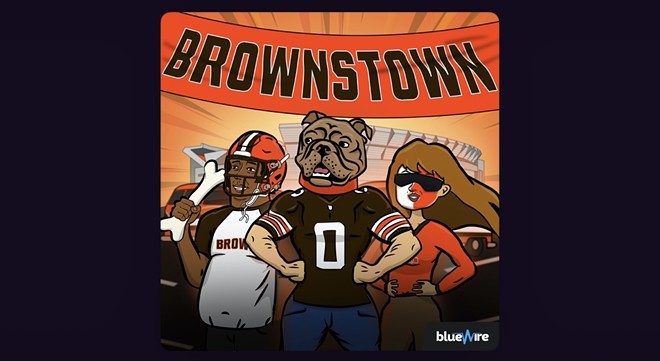 Andre Knott knows how some fans might initially react to his new podcast series Brownstown, which debuts next week and looks back at the miseries and failures of the last 20 years of Cleveland Browns football.

"They'll be like, 'We're good now. Why does this asshole want to make us go through the bad stuff?'" he says. "Well, if you want to be on the bandwagon, you have to know where we came from to truly enjoy it."

Plus, this isn't just a Wikipedia scan of two decades. The series, produced by BlueWire Podcasts and out next week with the first three of 16 episodes, includes dozens of interviews with former players, coaches, front office members and fans that tell the stories behind the stories, and some stories you've never heard before.

Like from Shaun Smith about how Randy Lerner's son used to come to the locker room with his friends and point around, telling them who sucked and who was going to be cut.

"Richie Rich, Shaun says they called him," says Knott. "Shaun Smith also doesn't admit to punching Brady Quinn, but he does admit he helped him up after he got punched."

As the Browns embark on a promise-filled season with an eye on going deep in the playoffs, the tales of yesteryear from the people that lived them illustrate just how far the team has come, and the passion that has tethered fans to the Browns through thin and thinner.

"We've got Phil Savage, Romeo Crennel, Brady Quinn, TJ Ward, and lots more," says Knott. "The interviews are gold, and after we put the episodes out we might release the full interviews too. Like the one with Tim Couch where he almost cries talking about everything he gave up — his body, his time — for the Browns at such a young age and then his career being over."

There are basically three generations of Browns fans now, Knott says: The ones that only know the depression of constant losing, the ones who can remember some of the 1980s-era team, and the ones who are old enough to remember when the Browns were a consistently competitive team. Brownstown will have something for them all.

"This 20 years was a slap in the face to Browns fans," says Knott, who before his current gig at Bally Sports worked at various local media outlets and for the Browns themselves at one point. "And the one thing I wanted to get out there was this love affair between fans and a team that didn't love us back in the same way."

Knott's been interested in doing more documentary work for awhile now and the pandemic gave him a chance to spend time on the project.

"Matt Underwood has been stearing me in my writing, and I had talked to BlueWire about different ideas," he says. "I just want to tell stories. I think it's time in the business to move forward, in sports radio. We've dumbed it down so much. There are ways to have conversations that have depth to them. We fight and go back and forth about the back-up quarterback and whether Baker Mayfield is respected. It's become stale."

Brownstown is out next week and available wherever you get your podcasts.

Listen to the trailer below.