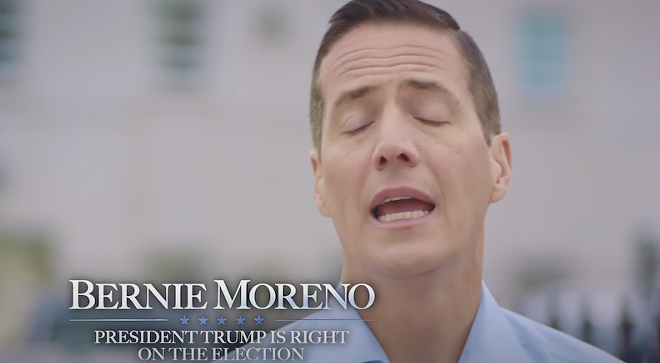 Bernie Moreno announced last night that he has suspended his campaign for a U.S. Senate seat.

Like most of the Republican candidates still endeavoring to win, Moreno had lately taken to debasing himself and soiling the reputation of his family for the privilege of begging for the approval of Donald Trump.

When informed yesterday that he did not have it, Moreno bowed out, but only after spending millions of his personal fortune campaigning on such noble and high-minded planks as English as the national language.

“I asked for a private meeting with President Trump this afternoon to discuss the state of the Ohio Senate race,” Moreno said in a press statement. “I am a businessman, not a politician. Business leaders recognize patterns before they happen. After talking to President Trump we both agreed this race has too many Trump candidates and could cost the MAGA movement a conservative seat.”

The Westlake luxury car salesman, whose big blockchain dreams for Cleveland have floundered once he entered the political realm and stepped away from Blockland, remains a board member at Tri-C and will undoubtedly, now that he's returned to private life, seek to sit on more esteemed boards in the future. His choice to lie about the 2020 election for his campaign should never be forgotten by those who make such decisions.