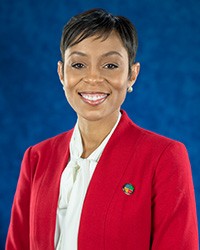 Speaking at John Adams High School Tuesday afternoon, Bibb said he "wholeheartedly" endorsed Brown, whom he said would work alongside him to champion Cleveland and deliver essential resources.

"We won't be that city of opportunity unless we have a strong voice in Washington that's going to fight for Cleveland every single day," Bibb said. "I'm so happy that I not only have a congresswoman, but a sister and a friend who goes to Washington D.C. every single day to work with President Biden and other leaders to make sure that Cleveland gets its fair share of resources."

I’m proud to announce my endorsement of @ShontelMBrown for Congress. We need a champion in Washington who will help us bring real change to Cleveland. #BuildBackBetter pic.twitter.com/d1RmACse6L

Turner announced that she would run again last month, setting up a rematch with Brown. Turner continues to advocate for raising the minimum wage, Medicare for All and other policies to support the "poor, working poor and barely middle class." Turner also endorsed Bibb in his bid for Mayor and canvassed for him in the weeks preceding the 2021 general.

Brown did not formally endorse either Bibb or Kelley in the Cleveland mayor's race, but as chair of the county party has been aligned with Kelley—the Dems' executive vice chair—and the old guard that has long controlled it, some of whom were involved in the attack ads against Bibb.

As a congresswoman, Brown's early posture has been cooperation with the Biden administration and staunch support for the state of Israel. She has thus far sponsored three pieces of legislation, related to modifying mandates in the Government Accountability Office, providing meals to children in after school care and delegating authority to the VA for leasing health and fitness space for veterans.

The primary election is May 3.