He's teamed up with producer-activist Shawn Rech, and is filming across Northeast Ohio 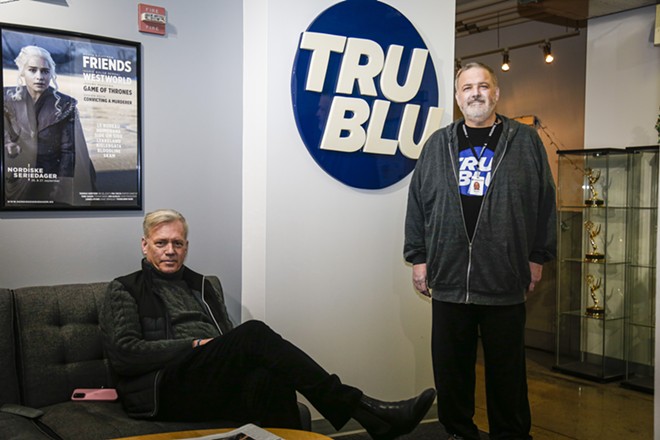 A founder of Transition Studios, a production company known for criminal justice documentaries, Rech had just launched a religous-tinged streaming service called AGTV the Thanksgiving of 2020, a "guinea pig" of an experiment riding the success of their Christian exposé, American Gospel.

But he thirsted for his true passion: chewing into the world of American true crime.

And he had one person in mind to help: Chris Hansen.

This year, the crime-show devotees have released TruBlu, a "factual streaming network" that aims to produce and aggregate documentaries
click to enlarge 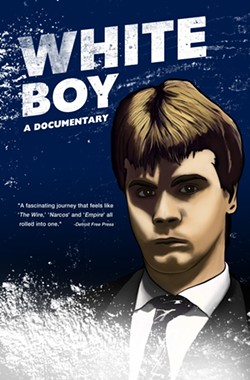 Transition Studios
Poster for 2017's White Boy, one of Transition's films featured on TruBlu.
exposing scam artists, megalomaniac womanizers, predatory men in midst of immoralities, and so on. Two weeks in there are, Rech said, "thousands of paid subscribers."

After years of dealing with the ills—and sometimes lowballing—of Hollywood bureaucracy, both Rech and Hansen see TruBlu as a cut-the-middleman approach to spotlighting their passion projects and late-career curiosities. (Hansen himself has shopped his Predator concept to roughly a half dozen studios.) Those projects, some which are produced and edited in one of Transition's myriad cubicles or soundproofed rooms, carry what has made Hansen a household name: a never-ending curiosity with criminal motivation.

"All we've done here is take the same enterprising techniques that we use in the Predator investigations," Hansen said from a guest chair in Rech's office. "And apply them to the distribution of this content."

But TruBlu, which will set subscribers back $4.99 a month, wants to be something more than, say, a Hulu for the next Hansen investigation. With 15 of TruBlu's shareholders, and its headquarters, existing in Cleveland, Rech envisions TruBlu as a true crime incubator for aspiring Northeast Ohio filmmakers—to cease, Rech added, a "severe brain drain." (CSU's film school being next-door is both practical and symbolic.)

Permanence in film seems to be a shaky concept for Rech. After years of mining Cuyahoga County's criminal docket for Crime Stoppers Case Files, then Warrant Unit, which aired on WOIO, Rech ran into legal and financial trouble. "Making those shows was so thankless," he said. "We got sued because we published a document a government agency gave us—we decided to never run a carousel of fugitives after that."

With his previous company closed, Rech turned to films. In 2017, he made White Boy, a chronicle of the case of Richard Wershe, Jr., a Chicago drug dealer who was sentenced to life in prison for drug trafficking 650 grams of cocaine at 17.

Because Hansen had covered the Wershe, Jr. case as an ambitious 25-year-old reporter—via embeds with the Chicago police—Rech brought him on board for White Boy. The two have been, in some capacity, collaborating on various film projects since.

Which has only been a boon to Hansen, who, at 63, has been chasing predators or con men for "some 40 years," he said. (It's earned him eight Emmys.) Since Dateline canceled Predator in 2013, he relocated the investigative format to a number of outlets, including Crime Watch Daily and Discovery ID, with varying success. One offshoot, "Hansen vs. Predator," was shrouded by a 2018 controversy in which Hansen wrote bad checks for the series' Kickstarter backers.


But with TruBlu, Hansen has freedom and control. Whether it's investigating the Tinder Swindler of Tucson ("The Facebook Fiend"), or confronting a dozen child sex abusers in Polk County, Florida (the Predator-like "Takedown"), or following Paycheck Protection Program fraud to a "cattle farm on the Jersey shore" (a to-be-named series), it seems that, through the freedom of streaming model, both Hansen and Rech get to be their most creative.

So creative that Rech may not own TruBlu for very long.

"We already have people who want to buy this already," he said. "But my only rule is that it's got to stay here."