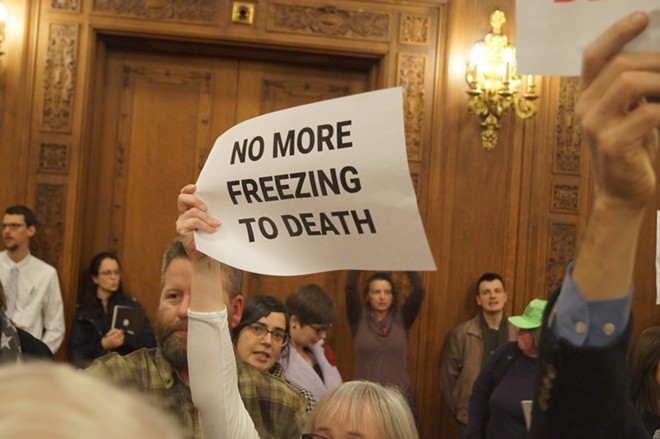 Sam Allard / Scene
Rally for Metanoia/Denison UCC, 1/6/2020
The City Club of Cleveland will host Ward 7 Councilman Basheer Jones for a virtual forum Wednesday. It'll be the latest conversation in a series that's looking more and more like an official platform for potential 2021 mayoral candidates.

One veteran local politico suggested to Scene this week that, just as in 2017, candidates probably wouldn't make their campaign intentions public until after the autumn presidential election, and in some cases not until early 2021.

So it's unlikely that Jones will declare his candidacy tomorrow. He should nevertheless be in the conversation. He is known to have had meetings with members of the donor class about financing what would be an upstart run, and he is oozing with youth and confidence besides. (Jones is still in his first term as councilman, having narrowly unseated incumbent TJ Dow in 2017.)

Jones captured headlines briefly in January for sending an email to his council colleagues asking them to explore the possibility of allowing public comment at Monday evening meetings, a practice currently prohibited despite recurring pleas from a public — this should be obvious — that's increasingly unwilling to accept being ignored and trampled upon.

"I understand that people can speak during committee [meetings], but let’s be honest very few people have time to do that," Jones wrote. "I believe that we should allow residents to speak. I’m not saying a free for all but the time for complete silence is done. Let’s figure out what’s the best route and make sure there is a sense of respect on both sides, but silence is not the answer.”

Alas, silence is still the answer. Or at least it's the answer that City Council leaders prefer. They have been steadfast in their refusal to institute a public comment period and, when asked, tend to start hand-wringing about anarchic vocal minorities and so forth. Jones' acknowledgement of council leadership's fears — "I'm not saying a free for all..." — suggests that Kelley and others have promulgated the view of a public comment period as something ugly, indecorous, and worst of all inconvenient.

But for the record: Allowing public comments at public meetings is an utterly standard practice at other public and quasi-public agencies in the region. It is not some scary, ignoble proposition that will derail or diminish the routine emergency legislating and grandstanding which occurs at these meetings already.

Moulthrop should by all means ask Jones Wednesday how his January suggestions were received and if discussions progressed at all after the demonstrations in support of UCC Denison and the homeless population that prompted Jones' email.

But if Moulthrop doesn't, an audience member more than likely will. The public cares deeply about its right to weigh in on the actions of its legislative representatives and, go figure, cares more deeply as legislators deviate further and further from the public interest. In the recent City Club Q&As, it was audience members who submitted the questions to Kelley and Griffin about the lack of public comment.

The answers were absolutely unacceptable. Kelley did not admit that there would be no public comment at city council's newly configured virtual meetings. Instead, he encouraged anyone "with an issue" to reach out beforehand to the chair of the committee to raise their concerns. Boo!

Blaine Griffin provided a more thorough response, which we suspect is representative of the council line, so we transcribe it here in its entirety.

Dan Moulthrop: What about public comment during council meetings? Because you guys are all meeting virtually right now, that's all been shifted. And I've heard from others, you hear talk on Twitter and so forth from people who are disappointed that they don't have a voice right now, or they don't know how to have a voice. What about public comment during council meetings?

Blaine Griffin: The first thing that I would say to you is that I think there is a way for people to have a voice to work closely with their councilperson. I think that there is a way to have your voice heard. If it were me — and I can't speak for everybody else — if it were me, I would rather speak at the committees. The committees is where, as the old political statement says, the sausage is made, where the policy is really debated at the committee table. I also think if I could, I would have more remote health committee [meetings] where people could actually come to a health committee that I might have in the community, where people could actually come and see what we're doing on the health committee and also give any input. I just have a thing about when a loud minority controls the platform. When we had the consent decree, there was a small group of people who went to every meeting and they were the only ones that spoke, so therefore, a lot of the neighborhood people got shut out. If it was a way for a fair process, so that it could be equitable in how people had a voice, I would be for something like that, but I don't see how just lining people up and having everybody making comments is going to affect a lot. But I would be open to it if that's what people wanted. I wouldn't be angry at all.

Moulthrop: Most council members that I know well spend an awful lot of time on the phone with their constituents, whether through text messages or phone calls or emails, and I'm sure your life — you and I know one another pretty well — I know your life is not any different than that. If you and I weren't talking right now, you'd probably be taking constituent calls—

Moulthrop: —which is another way that people can sort of offer comment. It may not be official public comment on the record, but ... anyway, I've got lots of thoughts on public comment and how you can do that, Blaine, but I can speak about that offline.

What an infuriating exchange!

1) Griffin's stated preferences notwithstanding, the fact remains that most people do not and cannot attend midday committee hearings. There is seldom public comment there. Jones stated as much in his email.

2) If Griffin wants to hold remote committee hearings in the neighborhoods, then he ought to! In fact, if he really wanted to, why hasn't he already? Sounds like a great idea. What's stopping him?

3) City Council passes legislation on a vast array of topics every year. It would be easy enough — if council actually cared — to establish a prescribed period for comment on that day's legislation and an additional period for general comments. This would ensure that those wishing to speak on urgent legislative matters weren't edged out.

4) City Council need look no further than Cuyahoga County Council to see that public comments increase proportionally with the degree of controversy surrounding a piece of legislation. If council is enacting something that the public overwhelmingly rejects, or if they're doing so in an underhanded way, than council deserves to be publicly reamed via all manner of rage and spicy disagreement. That's the point! But that would mean two things, of course. First, the rage and spicy disagreement would theoretically be reflected in local coverage of the issue, which would short-circuit council's heretofore limitless ability to pass bad legislation unscathed. Second, it would mean that council members might not make it home in time to catch the remainder of the ballgame!

6) Free Speech radical Dan Moulthrop ought to be well aware that private offline conversations between political figures and powerful insiders are the furthest thing, in fact are antithetical, to the spirit and purpose of a public comment period.

Local public leaders tend to be so enamored with their own commitment to public service that they forget what elected leadership connotes — i.e. that they are supposed to be representing a set of public interests. While they continue to trot out lies and excuses in their own interest, Clevelanders will continue to bash their heads into walls.

Unfortunately, now that the existential threat of council reduction is no longer on the table, council has no incentive whatsoever to respond to public sentiment. And without mechanisms like a public comment period, they can continue pretending they have no idea what public sentiment is. And legislate accordingly.