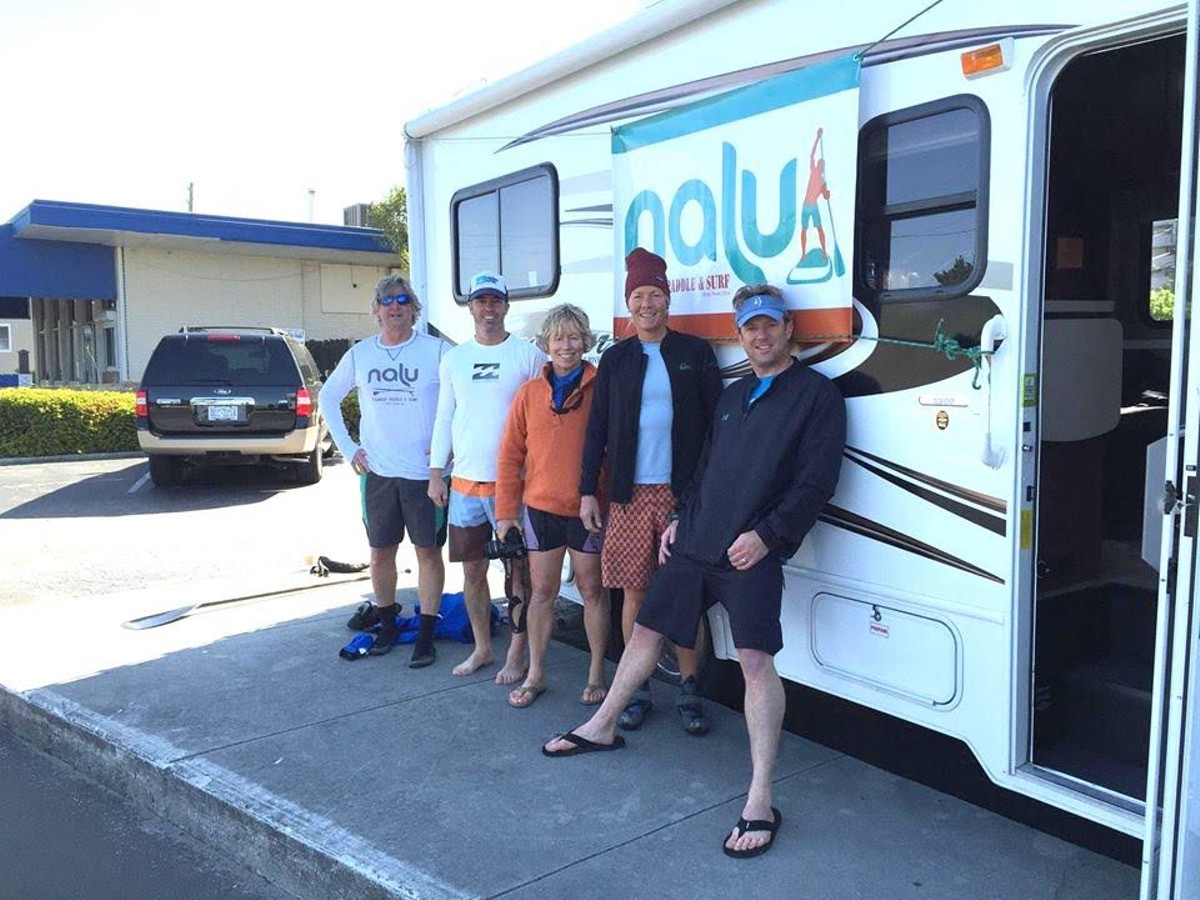 Bill Cochrane is on the left in this photo. Courtesy of Nalu SUP & Surf

Bill Cochrane runs Nalu SUP& Surf in Rocky River, which specializes in making our lake and rivers even cooler than one might imagine. (Yes, you can *surf* on Lake Erie!) And as the summer unfolds, Cochrane is highly aware that standup paddling has become something of a cultural force in Northeast Ohio and the Midwest. The name speaks for itself, but there's so much more to it. He speaks at a meeting of Sustainable Cleveland 2019 June 10 on the topic of water health and paddling.

I admit I haven't tried it yet. What's the deal?

First of all, it is the fastest growing watersport in the world. Two of the big things are that it can be done on any body of water. The only requirement is that you have to have enough water -- usually about 10 inches for the fin to clear the bottom of wherever you are. And we've got some awesome resources around here -- Lake Erie, all of our rivers, the Rocky River, Cuyahoga, Chagrin, inland lakes. We've got a lot of different bodies of water that you can experience this one. And almost anybody can do it. We had a lady, 86, a couple years ago give it a try. We've had kids as young as 4 and 5, you know. Unlike surfing where you need waves and it's difficult -- or wind surfing where you need wind and it's difficult -- this really pretty easy if it's flat water.

I've seen photos of people even doing yoga on these things. Is attaining balance all that difficult in the first place, then?

Well, you know, that would depend on the type of board. Your all-around boards are typically going to be the ones people start on. They're versatile, they're stable. You can still race them, but you wouldn't win. You could surf them, but you wouldn't turn. Another great thing about paddling is that it can be whatever you want it to be. If we've got waves, go surf. If we've got no waves and it's perfectly flat, get out there and strike a Warrior I or a plank or whatever it is those yogis do. It can just be, boy, I had a really bad day at work today and I just need to get out on the water.

Let's say I'm interested and I've got a group of friends who are onboard. What's the first step?

We offer all sorts of programs. Basically what you would be looking at there is an intro lesson, which is usually an hour-and-a-half long. It's 15-20 minutes on land learning, you know, the parts of the board, general dos and don'ts. Then we take the next 40 minutes to go out on the water and apply what you just learned -- proper paddle stroke, how to turn, how to stop. The last half-hour is typically kinda on your own; you'll always have a certified instructor out there just watching you and maybe coming up and saying, "Hey Eric, flip your paddle around. Or here's a new technique that'll make whatever you're doing well even better." We always encourage everyone to take a lesson their first time out. You know, there are things that you just don't think about -- one of which is the wind. It's easy to get into trouble when you're paddling out on the lake and you're like, "Wow, this is really pretty easy." Then you get a mile offshore and you turn around, and you're like, "Now I see why it was really easy. Now it's really hard." Generally, after that first intro lesson, in a lot of conditions you're ready to go on your own.

I'm noticing a lot of events on the website too.

We offer yoga classes, core fitness classes, a Monday night race league. That's a fun, lightly competitive league where teams of four race against each other. We've got an event on Aug. 22, which is our second annual Whiskey Island festival and race. We'll have a two-mile, a six-mile, and a three-quarter-mile kids race. Then you've got bands, food trucks, and all that. We've partnered with the Cleveland Metroparks this year on that.

Is this a relatively new activity around here, or has it been around for awhile and I've just missed it?

It's relatively new for the Midwest. You recognized that we're always a little late to the dance. The West Coast, East Coast, Hawaii, Australia -- they've been doing it for a while. But it's really just coming into its own in the Midwest. Our shop's been around for five years. For the first two or three years, people would see us out on the water -- I had one guy who saw me paddling out on the water in the morning. He came up behind me and pulled up and said, "Wow, I've got to go to church more often." I'm like, "What do you mean?" He says, "You have no idea what that looks like from a distance." And I'm like, "Ah. Don't get me confused that with gentleman."

It's gone from that six degrees of separation maybe four or five years ago where we'd be driving around with a standup paddleboard on top of our car, and people would be looking at us like, "You can't surf on a lake!" Well, first of all, you can, but that's not what this is. Two, now, it's not uncommon to drive in somewhere with a board on the top of your car and people will say, "Oh, wow, that that's standup paddleboard thing!" Or, "My neighbors have one of those! We tried those in the Caribbean!" It really is becoming extremely popular.

Seems like it. To tie things around and touch on Sustainable Cleveland, would you argue that water activities raise environmental awareness?

That's certainly the hope. I think it's like anything: You're into baseball and you go to your local ballpark, and there's dog poop and bottles and cans. It's the same thing on our lake. Those that use it, I think, generally have a stronger appreciation for its health and for taking care of it. The hope would obviously be, you know, as more people get involved they in turn take those views. We have a saying: Leave it better than you found it. I'm actually sitting down at Bradstreet's Landing in Rocky River right now and I'm watching the city workers pull all of the logs and trees that came in from the last storm. Once they do that, undoubtedly there's going to be plenty of plastic water bottles and styrofoam and tampon applicators and a bunch of other stuff that's gonna litter that beach. It's very easy -- OK, you go out, you paddle, you come back in -- pick up three pieces of trash.