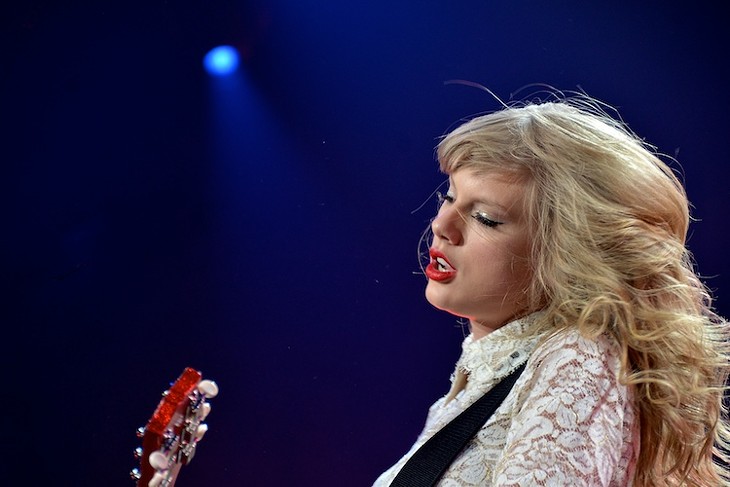 In the past few years, Taylor Swift’s romantic turmoil has often overshadowed her music. However, at her sold-out concert last night at the Q, all that mattered to the screaming crowd was the 23-year-old’s songs. The nearly two-hour set focused heavily on Swift’s latest album, 2012’s Red, which made for some interesting contrasts. The night opened with the subdued “State Of Grace” and the booming country rocker “Holy Ground,” which segued into a rave-meets-Blue Man Group display of people drumming on light-up cylinders. This back-and-forth continued through the rest of the show. For the spunky ’90s-rock gem “22,” she and the show’s troupe of dancers dressed up in costumes that resembled the bohemian cast of Rent and simulated a carefree night out with pals. (The dancing was so goofy, Swift even playfully chest-bumped one of the dancers.)

A lovely three-song acoustic set at the back of the arena—highlighted by a song she says she wrote for her mother as a Christmas gift, “The Best Day,” and a duet with opener Ed Sheeran, “Everything Has Changed”—led right into the soaring pop-country favorite “Sparks Fly” and recent hit “I Knew You Were Trouble.” The latter resembled a Baz Lurhmann production: Fiddler Caitlin Evanson began the song alone on stage shrouded in a dramatic swirl of fog and pounding beats, which was a prelude to a gothic medieval minuet that veered between tasteful modern pop and a grimy dubstep interlude. (T-Skrillex, anyone?) As that last song implies, Swift’s stage presence has certainly matured since her last concert in Cleveland, in 2011. It suits her well: “You Belong With Me” turned into a girl-group revue featuring Swift and her red-halter-dress-wearing four backup vocalists. And for the brutally vivid breakup song “All Too Well,” Swift sat down at a (red, naturally) piano, pounded the keys and flipped her hair like another talented songwriter, Tori Amos.