DeWine: No Comment on 'Heartbeat Bill' That Forced a 10-Year-Old Rape Victim to Travel to Indiana for Abortion

Ohio governor signed ban, but will only say rape is wrong 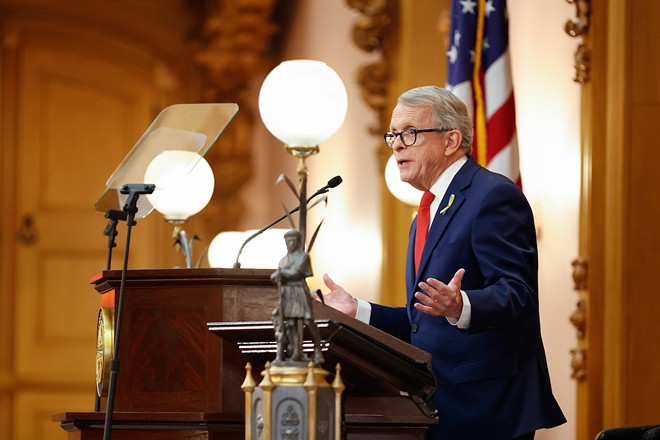 (Photo by Graham Stokes, for the Ohio Capital Journal.)
Gov. Mike DeWine during the State of the State address, March 23, 2022, in the House Chamber at the Ohio Statehouse in Columbus, Ohio.


It appears that a 10-year-old rape victim had to leave Ohio for an abortion, but Ohio Gov. Mike Dewine isn’t commenting on the fact that a law he signed made it necessary if she didn’t want to become a mother.

Shortly after the U.S. Supreme Court overturned Roe v Wade and cleared the way for the law to take effect, the child was on her way to Indiana for an abortion because she couldn’t get one in Ohio, an Indianapolis OB-GYN told the Indianapolis Star. The doctor, Caitlin Bernard, told the paper that an Ohio child-abuse doctor had called, saying the child was six weeks and three days pregnant and needed help.

That was three days after the six-week limit the DeWine-signed law places on abortion in Ohio. It makes no exceptions for women and children who are victims of rape and incest.

The story has made national news, but DeWine seemed unprepared on Wednesday to discuss whether legislation he championed is forcing children out of state if they don’t want to have their rapists’ babies.

“Yeah, first of all, I have no more information than you do or anybody does. Reading in the in the paper, it came came as you know, from a story out of out of Indiana from from a doctor over there,” he said as part of a rambling answer to a question from the Cincinnati Enquirer, according to a transcript.

DeWine went on to say it was “gut-wrenching” as a father and grandfather to think about a 10-year-old being raped, and that he hoped the doctors caring for her reported the assault to law enforcement. But he didn’t address the fact that a law he signed put girls like her in such an onerous situation.

In a follow-up on Thursday, DeWine Press Secretary Dan Tierney was asked whether the governor thinks juvenile rape victims who become pregnant should be able to get abortions, or whether he believes they should be forced to carry their pregnancies to term. Tierney didn’t answer directly.

“You have access to Governor DeWine’s recent comments on these issues, including that the only information available on the Indiana matter was from Indiana media reports,” Tierney said in an email. “I do not have further comment for you beyond yesterday’s remarks and the Governor’s numerous and extensive comments since the” Supreme Court decision overturning Roe v Wade.

While DeWine and his spokesman underscored that media reports were all they knew about the incident involving the Ohio 10-year-old, there have been warnings that something like this was likely to happen.

Shortly after DeWine signed the six-week ban in 2019, CBS News reported on an Ohio 11-year-old who was repeatedly raped by a 26-year-old, impregnating her. If the Ohio law was cleared by the Supreme Court, the story said, the girl could be left with few options after six weeks of pregnancy.

At six weeks, as many as a third of women don’t know they’re pregnant, and it’s a safe bet that even fewer girls do. And while statistics on pregnancies resulting from rape are sparse, it seems likely that Ohio and other states that don’t allow abortions in cases of rape or incest are going to force more children into the most difficult of situations.

The U.S. Centers for Disease Control and Prevention estimates that about 18 million women experience vaginal rape in their lifetimes and that almost 3 million become pregnant from it. The 2018 research from which those statistics were drawn said it was “the first in over 20 years to offer a nationally representative prevalence estimate of (rape-related pregnancy) of U.S. women…”

That’s an apparent reference to a 1996 paper published in the American Journal of Obstetrics and Gynecology. It was based on a three-year survey of 4,008 women that sought to determine “the prevalence and incidence of rape and related physical and mental health outcomes.”

Its findings relating to young rape victims are not reassuring.

“Among 34 cases of rape-related pregnancy, the majority occurred among adolescents and resulted from assault by a known, often related perpetrator,” an abstract of the study said. “Only 11.7% of these victims received immediate medical attention after the assault, and 47.1% received no medical attention related to the rape.”

It added that almost a third of adolescent rape victims didn’t know they were pregnant for 12 weeks — more than double the point at which their abortions would now be illegal in Ohio.

“A total 32.4% of these victims did not discover they were pregnant until they had already entered the second trimester; 32.2% opted to keep the infant whereas 50% underwent abortion and 5.9% placed the infant for adoption; an additional 11.8% had spontaneous abortion,” the paper said.

DeWine and his spokesman were reluctant this week to say whether he thinks young rape victims should be forced to carry pregnancies to term. But his office earlier this month confirmed his support of a bill restricting abortion in Ohio even further — and also making no exceptions for rape and incest.

For Aileen Day, communications director for Planned Parenthood Advocates of Ohio, DeWine owns the consequences of the abortion bills he signs — whether he addresses them directly or not.

“DeWine signed the six-week ban into law and he is the reason the 10-year-old Ohioan had (to) jump through repeated obstacles to get the health care she needed,” Day said in an email. “It is truly disgusting that he’s not being held accountable for all the harm he has caused Ohio. DeWine’s team has bragged that he is the most anti-abortion governor in Ohio’s history and his history backs that up by signing 10 dangerous abortion restrictions and bans into law.”